Global markets exhibited signs of healing as the Federal Reserve announced it would remain on the sidelines until conditions improve. We see recovery in equities, high yield, and new issuance in the CLO market.

PeerIQ analyzed the credit card master trust performance for leading card issuers – Citi, Bank of America, and Chase. Together these pools of credit card receivables represent tens of billions of dollars of prime consumer credit risk across the United States. Total delinquencies continue their multi-year decline since their peak in 2011. 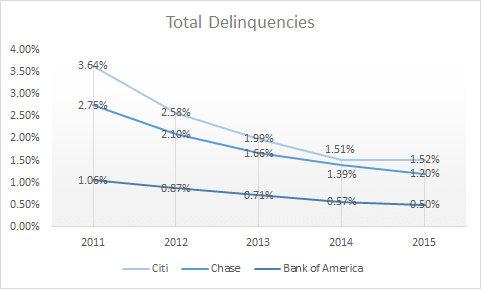 We note that the decline in delinquencies is substantially driven by a tightening of the credit buybox at large banks post-2008.

Bank of America, which has the lowest total delinquency rate, substantially shifted to higher FICO segments, reduced credit lines, and focused on transactors as indicated by this excerpt from a 2011 Bank of America Investor Day presentation: 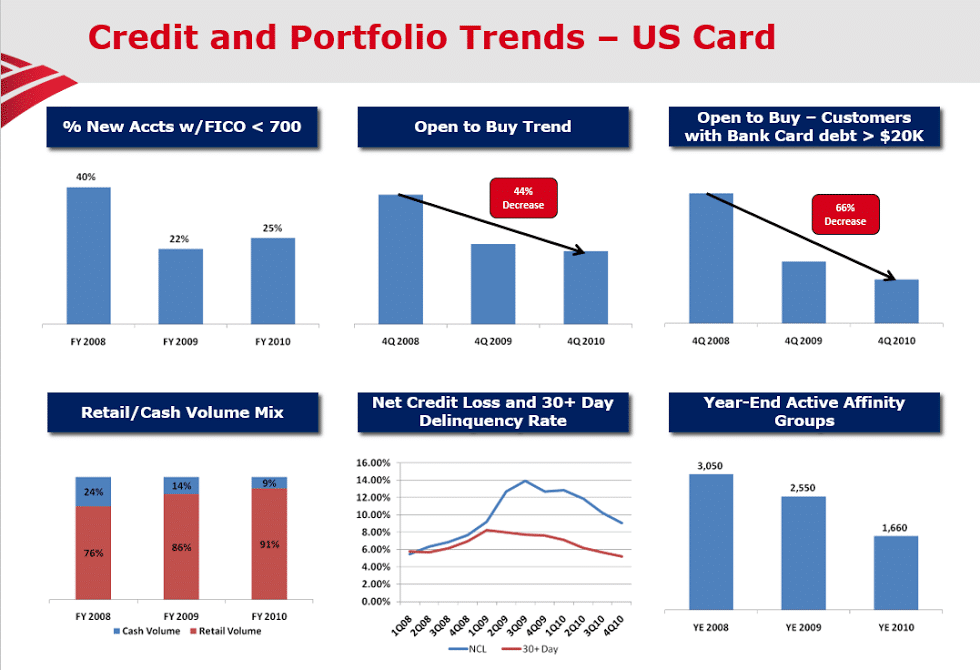 We see similar shifts across large banks, and not surprisingly, this shift in underwriting policy has created opportunities for marketplace lenders to step in and fill the lending gap.

Where are delinquencies rising?

Auto Loans
Outside of credit cards, we see an increase in delinquencies in auto-loans (1.24% in Q4 2015 vs. 1.16% prior year). We have seen a boom in sub-prime auto origination since 2010, and subprime auto delinquencies are at a 6-year high.

Student Loans
The vast majority of P2P Student Lenders have a high median FICO, and in some cases, have exhibited zero delinquencies or defaults.

Student loan delinquencies stand at 11.5%. (Note that approximately half of student loans are currently in deferment, and therefore not temporarily in the payment cycle. Consequently, effective delinquency rates are much higher than other asset classes. Also, student loans are non-dischargeable, and, unlike other forms of debt, they remain on the consumer balance, as opposed to charging-off like other forms of consumer debt.)

Taking a step back, credit product’s delinquency levels are substantially lower than peak-2010 levels, and are near multi-decade lows, as compared to credit card charge-offs. We have witnessed a period of unusually benign credit conditions. Borrowers that defended their credit scores during the crisis performed extremely well. We expect a normalization of credit performance going forward as “derogs” roll-off the borrower’s credit report after 7 years.

How has this impacted securitization markets?

It is a tale of two cities. One Main, which offers fixed-rate personal loans, successfully pre-marketed and increased the size of their deal in the face of strong institutional demand. OneMain has invested in building a familiar ABS brand since their securitization debut in 2012. OneMain enjoys a broad base of institutional buyers, an active ABS secondary market, and rich reporting for end-investors.

On the other hand, first-time ABS issuers in the unsecured consumer installment space are seeing spreads widen well beyond what one would expect based on credit performance. ABS investors are attaching risk premiums to P2P deals.  Drivers of higher risk premia are: limited transparency into Rule 144A securitization, lack of fair value standards, limited standardization, inconsistent application of asset review tests, and consequently, limited liquidity. Growing pains!

Fortunately, savvy issuers can apply best practices to reduce such risk premia to ensure their continued access to ABS markets during periods of distress. We look forward to discussing how PeerIQ works with issuers in pursuing these goals at the upcoming LendIt conference.