The marketplace lending market has received an influx of positive news recently.

At the time of downgrade review in February, Moody’s cited a faster build-up of delinquencies and charge-offs than expected. Moody’s also increased the expected cumulative lifetime net loss from 8% to 12% (bringing revised estimates in-line with platform and market expectations).

Improvement in Credit Spread on MPL ABS bonds
The ratings action was presaged by the ABS market which showed spread tightening from 1000 to 400 bps. Readers may seek to review the May month-end newsletter to see the analysis cited in the WSJ report: 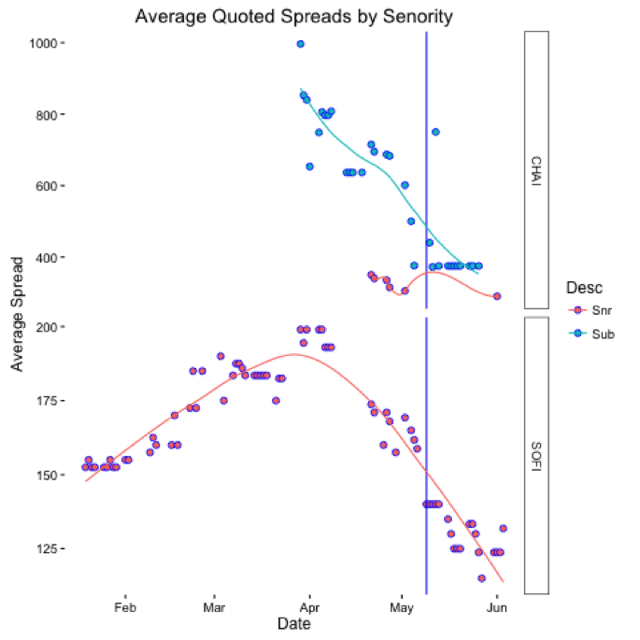 Leading up to the CHAI 2016 PM-1 offering in April, the culmination of ratings actions, regulatory chatter, delinquency fears, and volatile credit markets created an inhospitable environment for new deals. The auction resulted in limited participation and wide initial pricing–10.26% coupon priced to 12.5% yield on the CHAI 2016 PMI-1 C tranche.

Investors that bought the CHAI C tranche at new issuance without any leverage would have seen about 15% price appreciation in 3 months. Investors that performed the up-front credit work and applied analytics to separate the signal from headlines were able to earn outsized returns.

Dislocation creates opportunity
Ironically, the dislocation in recent months has created substantial investor interest in MPL ABS and whole loans. The CHAI 2016-1 PM1 offering prompted investors that were historically dismissive of marketplace lending to do a double-take.

Large asset managers with double-digit return objectives in a negative to low rate world are looking to strike bargains with platforms. There is still much more to be done. Nevertheless, the climate for establishing relationships with platforms may be as good as ever.