A number of headlines last week focused on student loans. Amazon and Wells Fargo announced that their short-lived partnership to promote private student loans has come to an end. This announcement marked the latest news to break concerning the controversy surrounding rates charged by private versus federal student loans.

Importance of Valuation to Unlocking Capital
In this week’s deep-dive topic, we focus on valuation, which has been a key regulatory and investor fairness topic. ASC Topic 820 (formerly known as FAS 157) introduced fair value measurements and disclosure requirements for financial instruments.

Historically, the MPL industry has used a variety of informal valuation techniques; however, to grow as an institutional asset class, the industry needs to employ a sound and consistent valuation discipline. A consistent and reliable valuation approach will facilitate the sale of seasoned secondary pools and securitization deals, which, in turn, helps platforms and investors to unlock capital.

Impact of Loss Timing & Seasoning on Valuation
In this newsletter, we isolate the impact of loss timing on the valuation of a loan pool as the collateral seasons. We explore the price profile of a loan pool over its life for four distinct loss curve shapes: a flat, a front-loaded, a back-loaded, and an up-down CDR curve.

The Price of a Loan Depends on the Timing of Losses over Loan Age
For the purpose of our analysis, we assume that recovery rate is zero for a defaulted loan. A loan pays interest and principal until it matures, is prepaid, or defaults. The price of a loan depends on the principal repayment and interest rate collected over the loan life. The level of prepayment and default, in addition to the timing of cashflow, determines loan pricing. As the loan pool experiences time-varying default or loss rates, the price changes over the loan life, even if the discount rates and collateral projections remain constant.

PeerIQ has developed prepayment and default models to forecast cashflows at the loan-level for a number of platforms. We focus the follow discussion on default curve shapes in the context of loan pricing.

Discounted Cashflow Approach for Loan Pricing
Throughout this analysis, we assume a $100 million loan pool that is comprised of 36-month loans with a 15% fixed-rate coupon, a 16% CPR, and a 1% servicing rate. We carry out loan pricing according to the following steps: ­

Common Metrics for Prepayment and Default

The following is background on basic metrics for measuring prepayment and default rates used in PeerIQ’s pricing engine.

Historical CDR Curves Are Not Constant Over Loan Age
Flat CDR curves do not exist in practice. The CDR curve can take on complex shapes and levels which leads to diversity in the price behavior of a loan over its life.

Exhibit 2 shows the typical CDR curves for marketplace lending loan pools originated in the first quarter of each year from 2009 to 2015. These CDR curves tend to have a back-loaded shape. Borrowers are least likely to default in the first few months after the loan is originated, and the likelihood of default increases as the loan seasons.

However, to gain intuition, we explore four stylized CDR curves shapes, a flat, a front-loaded, a back-loaded, and an up-down CDR curves holding 16% CPR constant. 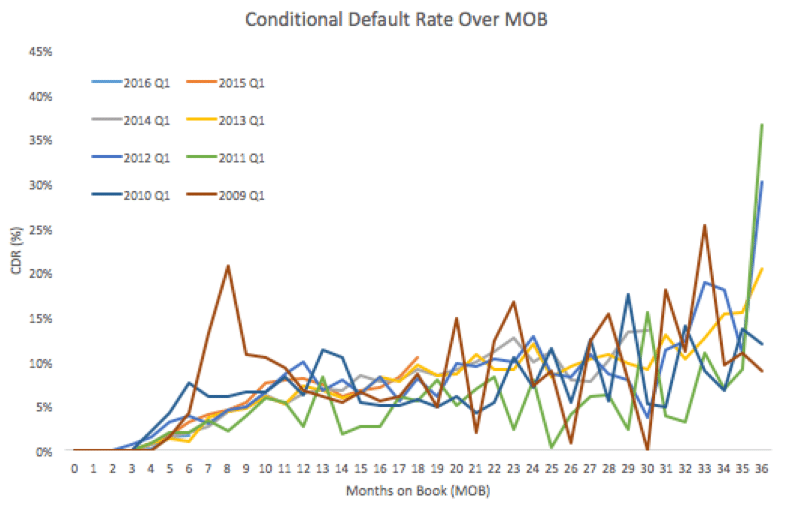 Since the price of the loan pool depends on the remaining principal at the valuation date, the smooth principal attrition schedule leads to a relatively constant price throughout the life of the loan pool (Exhibit 3). The loan pool cashflow does not exhibit any price volatility under flat CDR and CPR curves; therefore, discounting these cashflows at any point at a constant discount rate will give us the same price. In this scenario, the price volatility is zero.

Loans that experience up-front losses will have lower prices early in their life. Once the investors benefit from the initial 3 months of interest without any principal losses, the price of the remaining cashflow drops to $97. The price starts to return to par from MOB 4 to MOB 8, corresponding to the flat 18% CDR. As the loss rate drops, the price reaches premium at $102 at MOB 21, corresponding to a steady state CDR of 6%, then the price pulls to par at maturity.

Back-Loaded Default Rate Leads to Delayed Price Drop
Exhibit 5 shows step-wise ramping up of the CDR curve from MOB 0 to MOB 21. At MOB 21, the loan pool has a constant 18% CDR until maturity. Pools that experience a back-loaded loss rate have a prolonged price drop after origination. At approximately MOB 15, the loan pool is priced at a steep discount of $95, before the price pushes to par by maturity. The price drop is a significant event, as the balance of the loan pool is higher in the beginning, and results in a higher dollar mark down.

Up-Down Default Rate Shows Less Price Volatility
The up-down CDR path combines characteristics of both the front and back-loaded curves. Exhibit 6 illustrates the timing of this scenario. Loans that experience an up-down loss rate also experience a price decrease and increase over the life. In our case, the price drops to approximately $96 at the lowest point, and improves to slightly above par as the CDR curve decreases.

The above analysis examines the price profile given seasoning CDR curves. The price of a loan depends on the timing of losses over the projected remaining cashflow.

PeerIQ has created a family of credit models that predict prepayment and default behavior given loan borrower and loan attributes, payment profile, and macro conditions.

Uncertainty in the timing of cashflows is a relevant factor for all path-dependent risky fixed-income instruments. Having a consistent modeling framework for cashflow projection (and estimation of credit spreads) leads to a more consistent approach to loan pricing.

A new set of risk and pricing analytics, such as those offered by PeerIQ, is necessary to advance institutional standards, unlock pools of regulated capital, and enable market participants to efficiently access, price, finance, and exchange risk.