This week, we dig into (1) 2Q earnings season, (2) we look back at GS and MS over the last few years and trace lessons learned; and (3) we discuss investors’ insatiable appetite for the balance-sheet-light tech firms powering the next generation of banks.

We are not surprised. In April, we noted that this time is different: “the biggest banks of the land are issuing loans and soaking up liquidity – and are likely to outperform expectations.”

COVID-19’s economic impact continued to reverberate across the sector, as provisions for credit losses continued to mount.

MS was unscathed by credit provisions since they only originate secured loans collateralized by client equity holdings.

JPM and other banks booked record provision expenses due to their outsized consumer and commercial lending books. However, record trading results outpowered the provision build (which we expect will be released next year).

Forbearance Requests are at a Trickle

Banks reported that new requests for forbearance and deferrals have effectively petered out.

ALLY, for example, noted that their auto loan deferral policy has now reverted back to “business as usual,” and delinquencies (60+ days past due) have dropped by nearly 30%.

The two investment banks managed to survive the last crisis, unlike peers, Lehman and Bear Stearns. That world had changed post-crisis. Both banks faced difficult strategic decisions on how to build their businesses exiting the Great Recession.

A wave of new regulations closed off many of the profit-making opportunities banks had enjoyed previously.

Early on, MS – under the leadership of CEO, James Gorman, deliberately chose to diversify away from sales and trading, making a bold bet on the Solomon Smith Barney wealth management business that Citi was looking to shed.

In Gorman’s view, the steady, fee-based profits from wealth management could provide ballast for the potentially more-profitable (but definitely more volatile!) revenues printed by the investment bank.

Critically, MS also avoided the temptation to fast-follow GS into the competitive consumer banking space during the FinTech lending mania around LendingClub’s IPO.

This culminated in this year’s acquisition of online brokerage, E*Trade, bringing with it a massive customer base for MS’ wealth and investment tools, and helping drive down MS’ overall cost of funding to less than 1% (as of the February 2020 deal announcement).

Goldman Sachs: Charmed by its Past Glories, Now Racing to Catch Up

For years, the firm had been a clear powerhouse in sales & trading, building a reputation as the “go-to” shop for the complex, difficult transactions (for a price, of course).

GS started with a smart acquisition of GE Capital’s deposit base.

GS then committed the firm to the consumer banking platform, Marcus. Trying to catch up from a standing start, GS poured money ($3Bn and counting), talent, and energy into the business. GS has also inked high-profile partnerships with Apple and Amazon.

In recent years GS has doubled-down, building a consumer banking and corporate banking franchise that puts it in direct competition with major banks and FinTechs.

What are the results? It has been a struggle. The Marcus lending portfolio is flat YoY and unit economics questionable; flashy partnerships with Apple and Amazon are light on economics for the firm (a card that was advertised as “designed by Apple, not a bank”).

Where are we now? GS bias to “build in-house” has created a capex drag of billions for the foreseeable future. That bias is creating a wedge between GS & MS performance in earnings.

And yet, it’s still not clear what GS is trying to achieve: become the new JPMorgan (a role that Jamie Dimon seems perfectly happy to keep playing, thank you very much), or something else?

The reveal of the “grand strategy” at January’s investor day (a first for the firm) was underwhelming and the jury is still out on where they’re headed and whether they’ll get there.

To be sure, GS had a strong quarter and should take a victory lap. GS beat analysts’ expectations by the most in nearly a decade – driven by trading arm benefitting from market volatility.

However, the focus and discipline of James Gorman is paying off. Not only did MS benefit from trading, up nearly 70% YoY, which fueled  record revenues of $13.4Bn, but the wealth segment also did its job in providing steady, stable ballast, and no blemishes from provision expenses.

For years, GS and MS were neck-and-neck in market cap. MS’ market cap is now $10Bn ahead at $82Bn. That gap seems likely to widen.

What are the lessons?

So what? How does that help me?

We believe consumer lenders can take away a few lessons from the battle between these storied Wall Street rivals:

Earlier this week, Wilmington, NC-based banking-as-a-service platform nCino had its public market debut. The oversubscribed IPO popped more than 150% on its opening, and by the end of the week, it had reached a market cap north of $6.6Bn.

Throughout the day, nCino executives hammered home their view of the firm as a “cloud-based” banking platform, tying their business to the high-flying tech companies (and tech company multiples!) in investors’ minds. 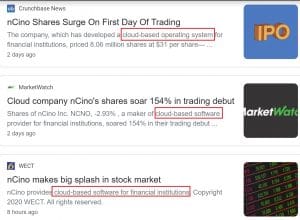 Folks, this is banking 2.0. Whether nCino or similar shops, there’s a new breed of FinTechs emerging that focus on infrastructure and enablement, staying nimble and balance-sheet-light.

And investors are eating it up.

Looking a bit further over the horizon, another fundraising announcement this week shows that the next generation of competitors are coming faster than you might think.

For example, FinTech firm MANTL, led by CEO, Nathaniel Harley, announced the expansion of its Series A fundraise to $19MM this week. The firm, which provides digital account opening capabilities for banks and credit unions, saw a 705% surge in deposit volumes in April as clients used their platform to enable home-bound customers to bank digital-first. The round was backed by new and existing investors, including Point72 Ventures and Clocktower Technology Ventures.

In Other News This Week: