Republicans grew the number of seats in the House and maintained control of the Senate (notwithstanding two Georgia Senate run-off races in January). The split results, with a Biden administration hobbled by a Republican Senate, would put a kibosh on tax hikes and aggressive financial services regulation.

This week, we have a lot to discuss: from the latest job numbers, with new claims falling to 751k and unemployment dropping a full point to 6.9%; to stunningly strong 3Q growth at PYPL and SQ; and regulatory moves aiming to stop Visa’s purchase of Plaid and pull Ant’s blockbuster IPO.

Markets soared in expectation of election results this week; at time of writing, U.S. stocks were on track for their best week since April, with the Nasdaq approaching a whopping 9% gain for the week.

This week saw positive news on the unemployment front, with new claims falling to 751k – the lowest level since the pandemic began – and overall unemployment rate falling a full percentage point to 6.9%. 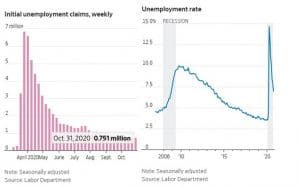 With winter coming and new stimulus programs still up in the air, it’s far too soon to declare the U.S. economy fully healed. That said, these results continue the positive trend we’ve seen nearly every week since COVID hit, and helps bring some comfort that the recovery steadily continues.

As we’ve been doing each week throughout the COVID crisis, in light of the latest jobs figures, we again take a look at how borrowers in forbearance programs have been performing.

We’re starting to see a pretty clear pattern emerge, with borrowers in the July and later forbearance cohorts not returning to current at the same level as earlier groups – in fact, July is now ~80% current, versus the 90% range for earlier cohorts. 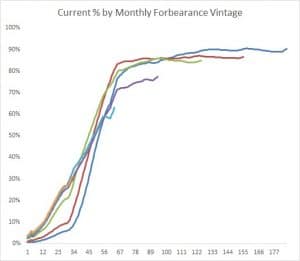 Similarly, later cohorts have reached higher levels of delinquency, with nearly 18% of balances in the July and August vintages flagged as delinquent (versus a peak of ~15% from earlier groups). 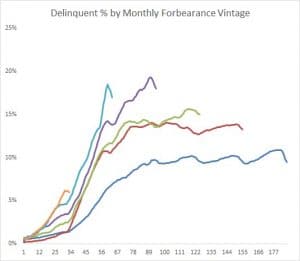 We’re monitoring borrowers carefully to see whether these trends persist: unlike earlier vintages that hit a plateau after 60 days, the July and August groups continue to improve, with a growing share moving into current status and the delinquencies coming down sharply after recent peaks. As the job market continues to heal, we’ll be watching closely for signs of further improvement.

Want to run these, and more, analyses on your own portfolio? Talk to your PeerIQ client representative to learn more.

PayPal [PYPL] (-4.23% after earnings) announced record growth in transaction volumes (+36% to $247Bn) and revenues (+25% to $5.5Bn) for the quarter. Yet this stellar performance wasn’t enough for the Street, as shares fell 6% after the announcement on slowing estimates of future growth. 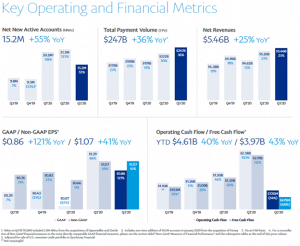 What’s next for PYPL? We’ll be watching for the adoption of a host of new products they’ve announced in the quarter, from new BNPL capabilities in the U.S. and UK, to a QR-based Venmo credit card, to native crypto transactions in the PayPal ecosystem. Stay tuned.

Worth pointing out that effectively all of SQ’s growth is coming from Cash App, while Seller services are effectively flat versus 2020: 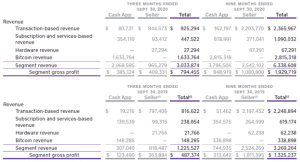 Turning to the lenders, LendingClub [LC]’s (+4.12% after earnings) volumes were up 79% versus the 2nd quarter, to $584MM, but this is just a fraction of last year’s $3.35Bn; instead, their $12.3Bn servicing portfolio continued to provide a steady fee stream during the quarter. Of course, as the LendingClub pool seasons, the back book will provide declining servicing fee income over time. LendingClub will need to continue to grow volumes. 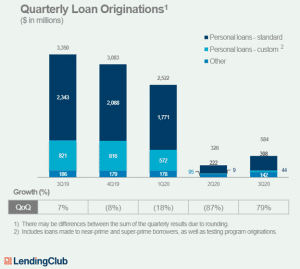 We note that “Other Institutional Investors” share of funding source appears to remain near zero, while “Managed Accounts” make a larger share.

LendingTree [TREE]’s (-15.42% after earnings) revenues felt the impact of softness in the consumer loan market, too: down 29% YoY to $220MM, with the drop in Consumer (-68% YoY) slightly offset by stable Home (+2%) and Insurance (+24%) segment revenues. In fact, Insurance is now the largest of their three lines, contributing over $92MM for the quarter.

Two big regulatory moves on either side of the planet this week, targeting Visa and Ant, underline the growing scrutiny that FinTechs are attracting from regulators.

On Thursday, the Justice Department filed suit to block Visa’s $5.3Bn acquisition of FinTech Plaid, alleging that the acquisition would “allow Visa to unlawfully maintain a monopoly in online debit,” according to the WSJ.

There is real merit to the case. Visa/Mastercard have dominant market share in payments. Any potential rival network is gobbled up (yes, at great outcomes for shareholders), but at the expense of limiting competition or creation of alternative networks. Don’t forget that Visa is also an investor in Square. Square arguably could have provided a true alternative payments network to traditional credit/debt rails.

It’s hard to believe that in a world of QR codes, mobile authentication, decentralized networks, and the internet of things, that interchange charges to merchants are still 2 to 3% — often exceeding the net margin of many struggling retailers.

Although, let’s be honest, Visa executives’ artistry didn’t do themselves any favors, comparing Plaid’s threat to an underwater volcano (or so says the DoJ):

Over in China, regulators have put a stop to Ant’s record $34Bn IPO after founder, Jack Ma was summoned to Beijing for a closed-door meeting this week. The move comes after Ma criticized the Chinese government’s approach to regulating FinTechs like Ant, arguing that as tech companies, they should be viewed entirely differently than traditional lenders.

Beijing, to put it mildly, disagrees – with new rules in play that could force Ant to hold 30% of the loans it facilitates on balance sheet, versus the sub-2% held today.