This week, we look at President Biden’s picks for key regulatory positions, LendingClub’s acquisition of Radius Bank, and the fourth quarter earnings of banks and non-bank financial institutions.

In macro news, U.S. jobless claims fell slightly, but remain near 1MM. While the U.S. economy has been steady in areas such as housing and manufacturing in recent months, the labor market has been struggling to bounce back. The $900Bn stimulus package approved in December should provide some relief for workers and businesses in the current quarter, especially once businesses receive PPP loans and keep employees on payrolls.

President Biden could nominate Michael Barr as the new head of the OCC. Barr was assistant treasury secretary for financial institutions during the Obama administration. In that role, he helped craft the 2010 Dodd-Frank Act, a sweeping overhaul of financial regulation that followed the 2008-09 financial crisis.

The president’s nomination to head the CFPB is Rohit Chopra, the former assistant director of the agency. Chopra helped found the bureau championed by Senator Warren.

Biden has also nominated Gary Gensler to head the SEC, another prominent consumer advocate, who together with Chopra, is likely to reverse Trump’s deregulation.

Big news from LendingClub as they announced that they have received all necessary regulatory approvals to complete their acquisition of Radius Bank. “This is a transformative acquisition for the company and a watershed moment for the industry as we become the only full-spectrum fintech marketplace bank in the U.S.,” said Scott Sanborn, CEO of LendingClub. “By combining with Radius, we will create a category-defining experience that will also dramatically enhance the resilience and earnings trajectory of our business.”

The acquisition will help LendingClub reduce their funding costs, accelerate revenue growth, grow customer base through a broader set of product offerings, and generate additional data for their underwriting algorithms. See our first coverage of this news from February 2020 here.

One consistent theme across all banks and non bank financial lenders has been that the increase in deposits, driven by stimulus, has significantly outpaced loan growth (see table below), leading to a scramble for whole loans in the market as banks try to fill this gap in their balance sheet.

A few noteworthy observations from the earnings transcripts: 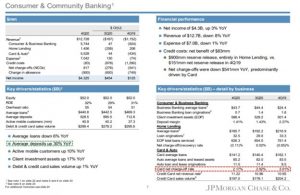 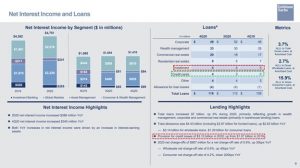 Citizens Group – Recently announced their POS platform, Citizens Pay. They will focus on adding new merchants to the platform. Citizens has extended more than $6.4Bn in unsecured POS financing and has served in excess of 5MM accounts. “Citizens Pay also offers the ability for manufacturers to embed financing into their products as a product-as-a-service software offered through multiple retailers.

That capability was initially launched through Citizens with partner Microsoft for the sale of Xbox All Access and sold through Target, Best Buy, Walmart and GameStop.”

Morgan Stanley – Successfully closed their acquisition of E*Trade, received an upgrade from Moody’s to A2, and announced their intent to acquire Eaton Vance.

Discover – Posted a phenomenal RoE of 30%, even though revenue was down 4% YoY, driven by strong credit performance, lower funding costs and lower expenses.

JPMorgan CEO Jamie Dimon, fired a warning shot at fintechs, saying that a lot of them are doing business unfairly. Many fintechs pull in revenue through hefty fees for debit card swipes that banks such as JPMorgan aren’t allowed to charge.

The largest U.S. banks are constrained by the controversial Durbin Amendment, which limits the fees lenders can charge merchants each time a consumer swipes a debit card at checkout. But those rules don’t apply to banks with less than $10Bn in assets. For banks exempt from the rules, fees are around 54 cents per transaction, while banks that must comply with the amendment charge around 22 cents, according to data compiled by the Federal Reserve.

There are “people who improperly use data that’s being given to them, like Plaid,” Dimon said.