New here? Subscribe now to get our newsletter each Sunday.

Unemployment jumped by 16,000, which brought the total number of claims to 744,000 for the week ending April 3rd.  The labor market has a long way to go before recovering the millions of jobs lost during the pandemic.

Low-income Americans are getting hit hardest by price increases in necessities like food and gas as the economy recovers, while  Americans with the highest incomes have seen the least amount of inflation.

The market implied inflation rates from TIPS are the highest it has ever been in the last 10 years – implies better performance for crypto (note Coinbase’s IPO and timing – covered later in this newsletter).

China, the country that invented paper currency, has created its own digital currency. The country will now have its central bank issue an electronic version of the yuan.

The digital yuan is expected to give China’s government new tools to monitor both its economy and its people.

We previously covered that the Fed’s focus is to execute the launch of the U.S. digital dollar successfully, rather than quickly.  As central banks launch their own digital currency, banking, payment, and fintech industries will need to adapt to the impending disruption.

Facebook Pay, which is already integrated with Instagram, Messenger and WhatsApp, is testing its new person-to-person QR code functionality to allow users to transfer funds instantly with a quick scan.

Facebook’s new payment method may serve as a precursor to their future launch of Novi, the digital wallet that is expected to hold Diem. Diem, formerly known as Libra, is a new digital currency Facebook has been developing with its partners since 2019.

Dwolla, led by CEO Brady Harris, has announced the launch of its real-time payments network, powered by Cross River. Dwolla’s new RTP Network allows businesses to integrate Dwolla’s payment API to connect with RTP-enabled financial institutions and send funds within a matter of seconds to a bank account.

Existing clients can change a single line of code to initiate an RTP transaction using the Dwolla API. Dwolla’s simplified API gives businesses the flexibility to initiate transfers across multiple payment modalities (ACH, Push-to-Debit, RTP) to their vendors and customers for an ideal experience.

In partnership with Cross River, Dwolla has lowered the barrier for its clients to access the RTP Network for instant bank transfers that are available 24 hours a day, every day of the year.

Visa Dancing with Crypto: Caught in the Innovator’s Dilemma?

Visa announced recently that it is now settling transactions from several of its customers on the Ethereum blockchain.

Our CEO, Ram Ahluwalia, is experimenting with SubStack and has a full tear-down on Visa’s strategy on an article titled “Visa: Caught in the Innovator’s Dilemma?”

We’ve now come to a close on the Q4 2020 earnings season and as with past quarters, we wanted to highlight a couple key themes. 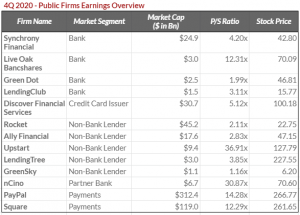 Coinbase released its Q1 earnings and outlook ahead of its anticipated direct listing.  With the expected inflationary environment described above coming, Coinbase’s public offering is well timed given the growing interest in cryptocurrencies from retail and institutional investors.

The 56 MM user number is bigger than SQ and Venmo and significantly larger than Robinhood and eToro. That is greater than every bank not named JPM.

Avant, led by CEO James Paris, has completed its acquisition of Zero Financial and its neobank Level, in a deal that will introduce Avant’s digital banking experiences to new consumers.

Level’s branchless digital banking platform, which offers features such as cash back rewards on debit card purchases, early access to paychecks, and other offerings, will be integrated into Avant’s digital banking and credit products.

The fresh infusion of capital will help the company scale and expand globally.

The Department of Justice did a huge favor for Plaid investors when it sued to block the $5.3 Bn Visa merger late last year.  After growing its customer count by 60% in 2020, Plaid has benefited from the recent rise in fintech valuations.