This week, we look at the new policy framework announced by Fed Chair, Jay Powell, at the virtual Jackson Hole; we look at Ant Group’s upcoming $200Bn (!) IPO; and the SPAC trend gets a new – seasoned – member.

In his speech to a virtual Jackson Hole this week, Fed Chair, Jay Powell, formally announced a revamp of interest rate policy that would prioritize employment over inflation.

Powell noted that the unanimous agreement “reflects our view that a robust job market can be sustained without causing an outbreak of inflation,” and positions the Fed to keep rates low for an extended period even if inflation starts to tick up above the 2% target.

The idea is to ensure that individuals, businesses, and markets do not expect sub-target inflation numbers. For instance, a 1% realized inflation level would imply monetary tightening by 100 bps.

We’ve noted previously that inflation has remained stubbornly below the 2% symmetric inflation target since 2008. When inflation does eventually return, we should see a steeper yield curve as long-duration Treasury investors demand greater compensation for bearing inflation costs.

Once again, new unemployment filings came in at the 1MM mark. And on the corporate side, new data shows that corporate profits fell an annualized 11.7% in the second quarter, only a slight improvement over the first quarter’s 13.1% drop.

Five months into this crisis, the improvements to the labor market continue, but so gradually as to be nearly imperceptible. And while Goldman released research showing that even the $300 / wk payment that President Trump ordered would replace income for a significant share of laid-off Americans, only three states have expressed interest in revamping their unemployment insurance programs to access the funds. 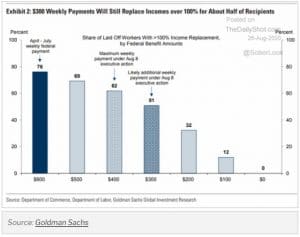 As the labor market progress continues to taper, here at PeerIQ, we’ve continued to keep a close eye on borrower behavior. This week, we give you a refresh on how borrowers in hardship programs are performing during the pandemic. 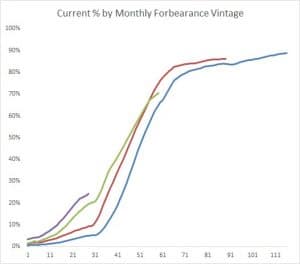 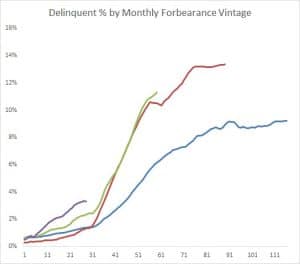 As COVID-19 continues, borrowers that participated in later forbearance programs (June and July) are moving into current or delinquent status faster than their earlier-cohort peers.

Interestingly, we are seeing that speed accelerate from June to July, with more than 20% of borrowers already current less than 30 days post-July. Unfortunately, we’re also seeing that acceleration in the move toward delinquency, with more than 3% of the July cohort already delinquent – a level that took April borrowers nearly twice as long to reach.

Contact your PeerIQ relationship manager to learn more about this and other loan-level analyses available to subscribers on our platform.

This week, the FHFA announced that it would postpone its planned 50bps surcharge on refinanced home loans until December 1st, and exempt loans below $125,000. The move comes after significant pushback from industry players and politicians, who argued that the additional costs would hurt borrowers (and the bottom line of mortgage lenders).

The fee was initially proposed to build a capital buffer against future loan losses, but the short turnaround would have left many lenders paying the fee out-of-pocket for loans already locked and moving through the system.

States Encourage FinTechs to Play in their Sandboxes

This week, American Banker reported on the regulatory sandboxes set up by Arizona, Florida, Nevada, Utah, West Virginia, and Wyoming to encourage FinTechs to experiment with new products and solutions before pursuing licenses or other regulatory hurdles.

Under these regimes, FinTechs typically have two years to issue products and experiment with solutions that appeal to customers before pursuing more formal licenses (also consumer protection laws may still apply).

And the sandboxes are set to get bigger: Illinois and North Carolina are among the other states with similar programs under development.

This week Ant Group, the FinTech arm of Jack Ma’s Alibaba, filed additional disclosures ahead of its planned dual-listing in Hong Kong and Shanghai. The payment and investments behemoth handled $17Tn  ($118Tn RMB) of transactions in China through the year ended June 30, and overall generated $3Bn of profit in the 1st half of 2020.

The firm is expected to IPO at a valuation north of $200Bn, which would vault it into the ranks of some of the world’s largest payments and financial firms, such as Visa, Mastercard, JPMorgan, and PayPal.

Ant in a relatively short amount of time has emerged as a digital banking and investing powerhouse that has no analogue (but plenty of aspirants) in U.S. markets.

We will pore over the Ant Financial S-1 in a future newsletter.

On the financing front, this week Betsy Cohen,former founder and CEO of Bancorp, launched a $750MM SPAC, FTAC Olympus Acquisition. Cohen is launching the vehicle to seek out FinTech acquisitions, and will act as chair while the general partner of Propel Venture Partners, Ryan Gilbert, serves as CEO.

This isn’t just the latest in a trend of SPACs: in fact, this is Cohen’s fourth FinTech-focused buyout company, with previous launches under her belt in 2018 (merging with Paya), 2017 (International Money Express), and 2015 (CardConnect, later acquired by First Data).