This week, we look at the improving retail spending data, even as unemployment figures continue to flash warning signs; we recap a big week in 3Q earnings, with seven of the major banks reporting.

U.S. retail spending increased 1.9% in September, the fifth straight month of retail sales gains. Housing-related sales such as home improvement and furniture did particularly well, – particularly as we all look ahead to a new normal of increasing working from home.

At the same time, U.S. unemployment claims rose to nearly 900k, continuing more than a month of new claims hovering in a tight – though still elevated – band of 800-900k per week. The claims numbers, paired with a drop in continuing claims (the number of unemployed who are currently receiving benefits) to 10MM as recipients’ benefits expire, are continued evidence of slowing recovery across the country. 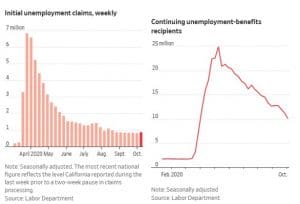 The key question continues to be, how long will the U.S. consumer continue to spend? A new study from the University of Chicago and JPMorgan Chase Institute, released on Friday, shows the boost that aid programs provided to the economy and raises further worries about what will happen when those programs end..

According to the study, the pandemic economic relief measures not only helped families maintain spending levels, but spending by beneficiaries in fact increased 22% YoY in the month of April, before falling back in August as benefits programs expired. While the extra benefits helped maintain families’ savings, they disappeared just as quickly: beneficiaries spent down two-thirds of the new savings in August. 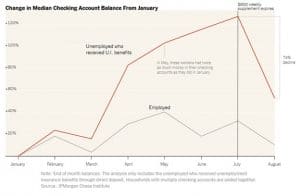 Earnings season officially kicked off this week, with ALLY, BAC, C, GS, JPM, PNC, and WFC all releasing their 3Q results. A lot to process; we share a few highlights below.

JPMorgan beat analyst expectations with $9.4Bn of profit in 3Q 2020, setting aside only $0.6Bn for future loan losses after booking a nearly $10.5Bn reserve in the second quarter. CEO, Jamie Dimon, emphasized that recovery was still uncertain, noting that if the economy improves, JPM could release $10Bn it had set aside for loan losses, but in a double-dip recession, that could potentially require another $20Bn of reserves.

Below is an excerpt from JPM’s investor deck. Note the scorching hot ROE of nearly 30%, despite $1Bn in charge-offs. JPM, unlike most community banks, has a dominant consumer lending franchise that others, including GS Marcus, seek to emulate. 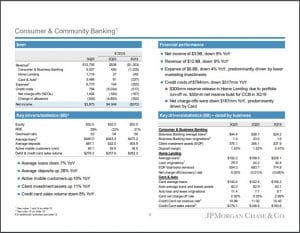 Bank of America’s consumer business continued to improve, with consumer loss allowance holding steady at 2.43% of loans and leases, and NCOs moving down to 50bps (from 65bps in 2Q 2020 and 55bps in 3Q 2019). An improved economic outlook and lower card balances helped support a reserve release of $0.3Bn, with customer spending continuing to shift from credit (gradually improving from 2Q slump) to debit (strongly up YoY).

Here are some highlights from BAC’s consumer lending portfolio: 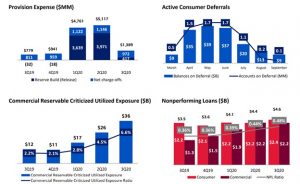 Citigroup’s consumer revenues were down 13% YoY to $4.5Bn, driven by a mix of lower transaction and loan volumes. Importantly, credit costs came in at only $1.2Bn this quarter, a 60% drop from 2Q and 23% lower than 2019, supporting a slight release of $8MM from ACL.

Ally’s auto originations have recovered from their 2Q slump, and are now more than $3Bn per month, with charge-off ratios continuing to fall (now 41bps versus 58bps last quarter and 83bps in 3Q 2019). Overall reserves held flat QoQ at $3.4Bn; now that auto hardship programs have expired, on Sept 30, 8% of those taking advantage have moved into delinquency and 3% have received further extensions, with 89% graduating into current.

Wells’ community banking business clocked in with deposit balances of nearly $900Bn, up slightly QoQ / +20% YoY. Client spending via debit and credit cards continues to recover from 2Q (+10% and +20% respectively), though still down slightly (3%) / (6%) from 2019. On the consumer lending front, WFC booked a slight ACL increase of $162MM (2%) in 3Q, driven by increased CC and Auto allowances, offset by lower revolving and other allowances; ACL ratio held steady at 2.2%, while NCOs fell from 46bps to 29bps QoQ.

As we’ve been tracking for the past few months, hardship-to-current ratios have plateaued in the 85% range, while hardship-to-delinquency ratios are creeping up towards 14% (with the smaller, and later, July and August cohorts doing somewhat worse).

While borrower characteristics are obviously not identical, PeerIQ’s platform provides you with direct visibility into loan performance at a much faster cadence, not lagged the way bank earnings’ reports are. Which raises the question: are the big banks reserving appropriately, or will they need to take another hit next quarter?

Reach out to your PeerIQ client service representative to learn more about these, and other, analyses available on the platform.