This week, we cover the growing evidence of economic recovery; a big win on Madden-Midland; and, FinTech financing news. PeerIQ is also pleased to roll-out a loan delinquency and forbearance module – check out the screenshot below and reach out to learn more.

New unemployment claims clocked in at a 2.1MM filings this week. It’s a continuation of a downward trend in claims, albeit from historic levels.

And while more than 21MM Americans are receiving unemployment benefits of some kind, continuing claims dropped nearly 4MM from the prior week. That’s a notable change in trend that argues for the “recession has ended” thesis.

As unemployment benefits and stimulus checks arrive in people’s wallets, evidence is building that the economic fallout may not be as bad as once feared.

That’s in line with what we’ve seen here at PeerIQ, where loans in hardship have hit a peak of ~14%. 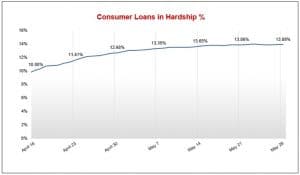 As the economic dislocation from COVID-19 has continued, we’ve spoken to many of you about trends we’re seeing in loan performance and delinquencies among borrowers. We’re happy to announce that we’ve added a new page to our Insights module to provide rapid access to portfolio delinquency and performance analytics on your loan pools. 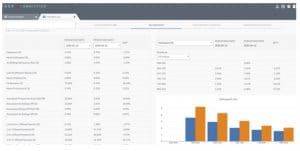 Please reach out to the PeerIQ team for a demo or a platform refresher.

Stimulus funds are having a major impact on Americans’ wallets. Commerce Department figures show personal income increased by $2Tn in April, a 10% jump, with government benefits (+$3Tn) outweighing the loss in wages (-$0.9Tn).

While perhaps counterintuitive, this is consistent with our analysis in April that stimulus payments might in fact increase net incomes for certain borrowers.

And those stimulus funds are having an impact on everyday Americans. That’s according to Bank of America CEO, Brian Moynihan, who in an interview with CNBC noted that customers with balances under $5,000 have in fact seen an increase in available funds.

Taken together, there’s evidence that we might be on our way to a 3rd quarter recovery. You don’t have to take our word for it – that assessment comes from Jamie Dimon, CEO of JPMorgan, who pointed to government support as the catalyst.

Over in Washington, D.C., the SBA issued new guidance on PPP, committing to repay lenders within 90 days after eligible loans were forgiven.

Still, that leaves PPP with eligibility rules that are stricter than what many argue is needed.

In response, the House overwhelmingly passed legislation reducing the payroll requirements to 60% (from 75%) and extending the period borrowers can use funds to 24 weeks (from eight). The Senate is expected to take up the bill next week.

Finally, this week saw continued signs of steady growth in our industry.

CommonBond announced the launch of SmartCash, a program that allows its customers to open a core checking account while refinancing their student loans. CommonBond CEO and Co-Founder, David Klein, put the launch squarely in-line with the firm’s mission, calling it another way for clients to “use their student loan to unlock value in their financial lives.”

The OCC finalized the “valid when made” fix [ OCC press release here ]. Here’s the excerpt from Acting Comptroller of the Currency Brian Brooks:

“Today, as one of my first acts as Acting Comptroller of the Currency, I signed a final rule to protect Lincoln’s vision and to clarify that a bank may transfer a loan without affecting the legally permissible interest term. The rule supports the orderly function of markets and promotes the availability of credit by answering the legal uncertainty created by the “Madden” decision. Such certainty allows secondary markets to work efficiently and to serve their essential role in the business of banking and helping banks access liquidity and alternative funding, improve financial performance ratios, and meet customer needs.”

It’s a big win for lenders that rely on bank partnership models to originate loans across state lines. The fix will improve liquidity for loans in the whole loan market and ABS markets by removing the uncertainty on the validity of loan terms originated by a bank (and sold across state lines to a non-bank).

The regulatory initiative has been the primary focus for the Marketplace Lending Association, founded by Nat Hoopes, who has worked on the issue for more than 3 years.

The final rule will go into effect 60 days after being published in the Federal Register.

Congratulations to the team at Marqeta, who this week announced a $150MM funding round at a valuation north of $4Bn. In a blog post, CEO Jason Gardner, noted that the funds would “help us accelerate our product momentum and global growth as a company.” It’s certainly a testament to investors’ faith in the payments infrastructure: the fundraise comes just months after reaching a $2Bn valuation last year.

Capital One and QED Founder, Nigel Morris, is making the case that now is the time for banks to acquire FinTechs.

Finally, UBS announced it is launching a VC fund. The fund is designed to accelerate UBS digital strategy. Bloomberg notes that COVID-19 has accelerated a shift toward digital services – even for high-touch wealth management. The fund is planning investments between $10 million and $20 million in dozens of companies, and plans to hold those stakes for at least five years.