Goldman Strikes Back; Fed Wants Inflation for the Holidays

The Fed signalled no change in interest rates in 2020. The FOMC intends to hold benchmark rates between 1.5%-1.75%, until inflation rears its head. Inflation has remained stubbornly below the 2% symmetrical target rate post-crisis.

The central bank has become increasingly concerned about the low rate of inflation despite a 50-year low unemployment rate. The risk of the U.S. entering the low-rate, low-inflation, and low-growth trap that has enmeshed Europe and Japan, is something that it wants to avoid.

Below we show the latest FOMC ‘dot plot’ showing the dramatic reversal from the Fed’s tightening in 2018. 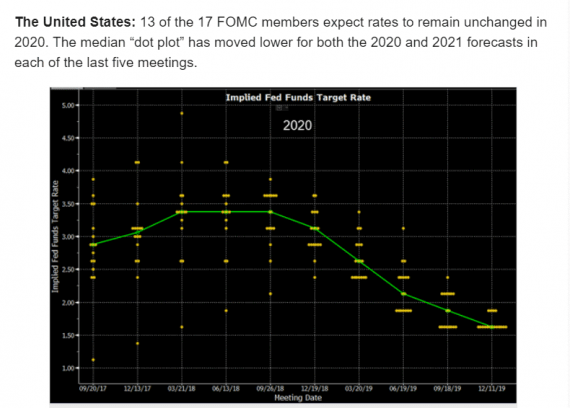 The Financial Stability Board released a report concluding that BigTech firms “may” pose risks to financial stability. The risks identified are a generic list of risks that banks face – liquidity mismatch, maturity transformation, and leverage.

The report is a head-scratcher. U.S. Big Tech firms have loan portfolios that are measured in the < $10B range. Nothing close to multiple trillions in loan derivative exposures at big banks. Also, the Big Tech firms — all of them to a name — are better capitalized and have low or no leverage as compared to banks (which run 12 to 15x leverage on average).

Other regulators, notably the OCC and SEC, are also concerned that U.S. financial services risk a decline in international competitiveness. See developments in Eurozone and Asia for instance (E.g., open banking, peer-to-peer payments with instant settlement, the rise in IPOs offshore, etc.).

The FT reports that Goldman plans to bring wealth management to the masses. Goldman will offer digital wealth management services via a robo-advisor to customers with as little as $5,000 in 2020. The technology will be deployed by a business that GS acquired earlier this year – United Capital Wealth Management. The press release from GS is seen as a “shot across the bow,” in response to the Schwab-TD Ameritrade announcement.

Score an additional point for the “convergence” theme. Robinhood re-launched its cash management service a year after a widely reported botched launch. The product will sweep the money customers don’t currently have in stocks into a separate account with 1.8% interest. The offering will provide bank-like services such as debit cards and FDIC coverage on deposits — through a partnership with Sutton bank.