New here? Subscribe now to get our newsletter each Sunday.

President Biden wants to raise the economic speed limit through the $1.9 Tn American Rescue Plan and $2.25 Tn American Jobs Plan. These plans will try to lift long-run growth by ramping up spending on infrastructure such as better broadband coverage and improved transportation links. The increased growth would give the Fed more flexibility as it manages its unemployment and inflation targets.

Goldman’s Consumer & Wealth Management ROE of 5.3% in Q1 (see slide below) is still much lower than JP Morgan’s comparable ROE of 54%. Goldman is growing its consumer focused Marcus and Apple Card products, but it still has a long way to go to generate JP Morgan’s numbers. 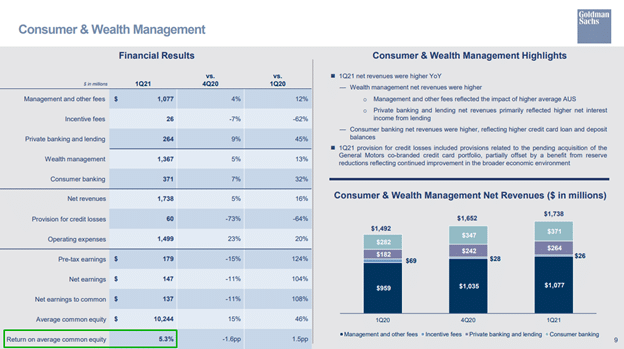 Also, we would have expected a much larger portfolio of receivables given the wide distribution and customer acquisition channel that Apple brings to the table. It seems that the Goldman/Apple partnership is not producing as many loans as anticipated (e.g. Are the incentives to Apple aligned? Is Apple not marketing aggressively? Is Goldman’s underwriting black box too tight?, etc.).  Both parties are attempting to grow through the new Apple Family Card sharing plan. 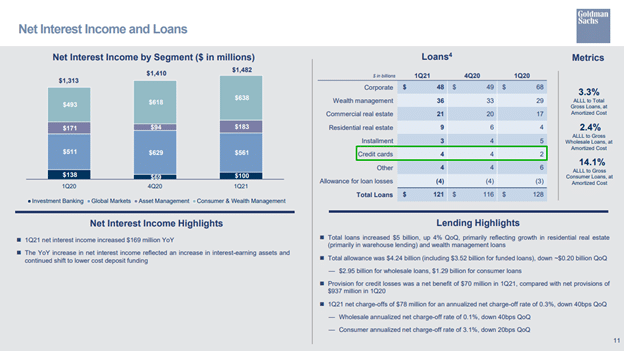 We were not surprised by JP Morgan’s record bank outperformance. Nearly a year ago, we noted “why is this time different?”

Our thesis that “Most banks simply do not have a large exposure/share to small business loans” has played out with the Q1 release of loan-loss reserves from JP Morgan and other banks. 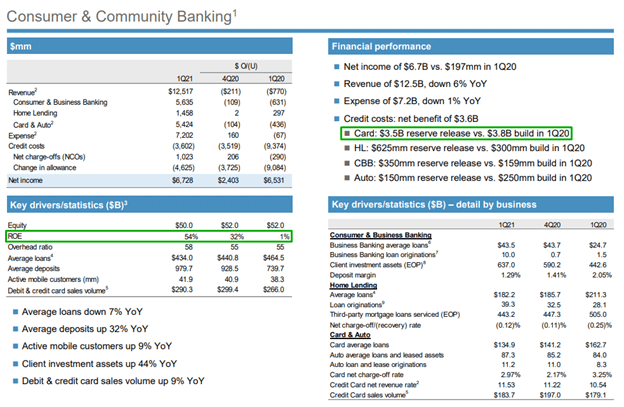 Apple will soon allow customers to manage personal finances together, using Apple Card Family. The new offering allows two people to co-own an Apple Card, and merge their credit lines. The feature is not novel per se – LendingClub, for instance, offers joint application, as do many credit card issuers.

What is relatively novel is that Apple Card Family will also enable parents to set spending limits and controls on cards they share with their children.

Affirm plans to expand its merchant offerings by acquiring digital return platform Returnly for $300 MM. Returnly simplifies the process of returns by instantly offering store credit, even before an item is returned to the merchant.

In the press release, Affirm CEO Max Levhin stated, “store credit, issued before the item is actually returned, is now a practical requirement in highly competitive segments like fashion and lifestyle.”

Affirm’s current market cap is $17.4 Bn. The company’s stock price increased 14% since the Returnly announcement and 51% since the company IPOed back in January 2021.

We see MANTL as a competitor to publicly traded nCino and Q2. Both firms provide account opening (and other) solutions to banks and credit unions.

Similarly, PeerIQ provides consumer loan analytics solutions to some of the largest community banks and credit unions in the land. Get in touch if you want to learn more about the PeerIQ platform.

Revenue based financing is also hot. Why? It’s a form of non-dilutive financing for rapidly growing SAAS companies.

Clearbanc, led by CEO Andrew D’Souza, raised $350 MM in a funding round valuation of nearly $2 Bn. The funding was led by venture capital firm Oak HC/FT.

Clearbanc offers a “pay as you grow” model that allows e-commerce companies to raise funds from Clearbanc in exchange for a percentage of the subscription revenue of those companies.

As part of the latest round, Clearbanc sold $100 MM worth of new shares and raised the remaining amount as debt. The company, which has raised more than $170 MM in equity funding to date, also revealed that it would rebrand itself as Clearco.

Schwab Waiting for Regulatory Clarity, Then Pouncing on Crypto

Schwab is eyeing the dramatic growth of Coinbase’s IPO and wants part of the action.

Schwab says it needs regulatory clarity on crypto before any offerings.  We noted at the time of CoinBase’s IPO that competition is coming – in the form of ETFs and also brokerage firms.  Retuers reports that Charles Schwab is seeking regulatory clarity and intends to be a “player”.