This week, we cover the big jobs numbers surprise; loosening of PPP requirements in DC; and continued growth of the “buy now, pay later” providers in our industry.

But before we get started, a word on what’s been happening in the U.S. these past two weeks.

Like all of you, we were horrified and disgusted by the video showing a white police officer in Minneapolis taking the life of George Floyd on May 25, 2020. His death, alongside that of Eric Garner, Michael Brown, Breonna Taylor, Ahmaud Arbery, and many (far too many) more, is a stark reminder of the racism that African Americans continue to face in this country.

We unequivocally support the right of our fellow Americans to raise their voices in protest at this outrage.

Alongside our fellow citizens, we’ve been shocked and saddened by images of chaos that have taken place at a number of the protests over the last two weeks. It is deeply dispiriting to see protests against police violence themselves end violently, essential workers arrested while trying to do their jobs, and elderly citizens left bleeding on the ground.

These are not easy images to look at.

It is essential that we not look away.

At PeerIQ, we’re optimists by nature, and although the deeply troubling images of violence from the last week are necessary viewing, it’s important to call attention to the bright spots:

As in everything we do day-to-day, we strongly believe that having a full understanding of the world means analyzing every data point, the good right alongside the bad.

That also means seeing the top-line economic data we cover in its broader context. Yes, the unemployment rate fell this week – news that the market cheered – but look one layer deeper and you’ll see that unemployment among African-Americans actually increased, to 16.8%.

Our core mission at PeerIQ is to provide the analytics that help make better portfolio decisions. And here, even with the positive news this week, the data clearly tells us one thing:

There’s a lot of work left to do.

Payrolls Burst 2.5MM Higher In May

Payrolls shot up by 2.5MM, versus economists’ expectations of a -7.5MM fall. Gains reflected the gradual reopening of the economy: employment rose in leisure and hospitality, construction, education and health services, and retail.

Markets rallied on the news, with the S&P closing the week at 3,112 and the Nasdaq at 9,814, just a few points away from the highs reached in February.

For a little historical context, we look one year ago. Equity markets are higher than the same time last year despite the economic turmoil. (Credit markets are a different story.)

As we (and others) have pointed out, one of the impacts of COVID-19 has been to radically accelerate the pace of change towards a digital-first economy. And it’s the large technology companies – the FAANGs and their peers – that the market believes have the resources, and reach, to benefit from that accelerating trend.

Not coincidentally, these firms also make up a large share of market-cap-weighted indices like the S&P, which have surged ahead in the last year… COVID-19 notwithstanding.

We believe the above data point says more about the acceleration of digital tech trends (e-commerce, conference, online content, etc.) than the fundamentals.

Banks Getting Some Love

In April, we offered the following contrarian take on the health of large banks:

“The mainstream view is that banks are in for significant losses. Markets show banks such as Citi trading at .5 price-to-book ratio, a $100Bn gap in market value and book value (implying tens of billions in asset value impairments [!?]).”

“This time around, banks are sources of strength and are injecting billions of liquidity.”

That view is now starting to move into the mainstream. And as governments continue to seek ways to support their economies, banks are an essential part of the solution, rather than a source of strain.

So when positive employment data was released, the financials rallied hard.

Since our April take:

Hopeful metrics from the consumer lending space support these moves, as our own internal data show: 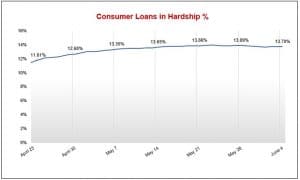 Here at PeerIQ, we’ve been tracking the rate of loans in hardship programs on our platform, and this week we saw that rate fall by 19bps – the first week-on-week decline since the beginning of the COVID-19 crisis.

One dot is not a trend, but the news is encouraging nevertheless.

This week, DC passed legislation extending relief to businesses under PPP. The new legislation gives businesses 24wks to spend PPP funds (up from 8wks), and reduces the share that must be spent on payroll costs to 60% (from 75%).

PPP funds have already had a significant impact across the country, as the team over at Evercore pointed out this week:

While the new legislation did not add additional funds to the program, there’s still ~$150Bn remaining to be allocated. With the rules relaxed, consider whether those funds are now appropriate for your business (or your clients’).

“Buy now, pay later” (BNPL) firms continued to gain traction with customers and investors, leading the pack with a number of positive stories from the industry this week.

Affirm, led by PayPal alum Max Levchin, announced the launch of a high-yield savings account. The account, offering a 1.30% APY, aims to support Affirm’s customers by giving them tools for both saving and spending. Behind-the-scenes, Affirm (a non-bank lender) partnered with Cross River to bring the offering to market.

QuadPay, a NY-based BNPL provider, this week announced a sale to partner Zip Co (ASX: ZIP). The Australian-based Zip offers point-of-sale credit and digital payment services to the retail, home, health, automotive, and travel industries, and has been partnered with QuadPay to access the U.S. market for some time. The all-share transaction values QuadPay at A$400MM.

And Bloomberg reports this week that Apple, through its Apple Card partnership with Goldman Sachs, will be launching an installment payment program for its products. The program would allow Apple Card holders to spread purchases of iPads, Macs, and other products over up to a 12mo period interest-free.

Finally, congratulations to the team at Varo Money, which raised $241MM in a Series D round this week. Forbes reports that Varo, led by CEO Colin Walsh, will use the proceeds to accelerate its move towards becoming a digital bank. Since the beginning of 2020, Varo has seen a nearly 350% uptick in deposits, a 140% increase in spending activity, and its cost to acquire customers is down 40%.