US CPI (ex Food and Energy) rose a modest 2.1% YoY in April. Including the rise in volatile oil prices, total CPI rose by 2.5% YoY. Market participants continue to anticipate higher inflation and rate hikes. The latest reading caused the US treasury yield curve to flatten to its lowest level since August 2007. An aggressively flattening yield curve is an indicator of recession and some economists speculate a recession could begin in 2020.

TransUnion reported that US credit-card usage increased to all-time highs. Delinquencies ticked up marginally to 1.78% in Q1 2018 from 1.69% in Q1 2017. 60+ day delinquencies increased by 11 bps for credit cards and by 2 bps for auto loans YoY, while they decreased 30 bps and 21 bps respectively for mortgage and personal unsecured loans.  Meanwhile, US consumer sentiment remains near its all-time highs.

In regulatory news, the House is close to passing a bill to ease Dodd-Frank rules, which the Senate has already passed. The bill would ease reporting requirements and lending restrictions on smaller banks. The FDIC is also working on rewriting CRA rules.  The CRA rules, conceived 40 years ago, are in need of revision to reflect the realities of online lending and digital banking. The FDIC is also evaluating potentially granting tech firms a regulatory swim lane to compete in the financial services sector under a proposed FinTech charter.

Bank and technology company partnerships continue. Apple announced that it will use Goldman Sachs to launch a co-branded credit card. Apple’s goal is to move into the mobile payments space, while Goldman seeks to expand into additional consumer credit categories. Apple aims to collect a higher percentage of transaction fees on mobile payments and also receive referral bounties for signing new customers.

The battle for transaction fee interchange revenue is heating up. Amazon is now encouraging smaller retailers to use its own payment processing system – Amazon Pay – in lieu of credit cards or PayPal. Amazon is willing to offer the payments at a discounted rate in exchange for growing market share and gain additional data insights from merchants.

Frank Rotman, founding partner at QED Investors, has published a follow-up to his earlier piece on the Copernican Revolution in Banking. Frank also cautions FIs about the chasing high-profile, competitive co-brand deals which may be void of meaningful economics for the winning. PeerIQ analysis of Frank’s original piece is here.

LC delivered revenue of $152 Mn, up 22% YoY and achieved 18% YoY growth in originations to over $2.3 Bn for the quarter. LC also updates the interest rates it charges borrowers and on the performance of its credit model. Most notably, LC will:

LC noted that loss rates are rising across platforms as credit renormalization continues. However, they are seeing better borrower profiles at the portfolio level on the platform. LC also updated its aggregate charge-off and return estimates across grades. The tables below show the QoQ change in these estimates. The market has responded well to LC’s earnings and the stock price has surged 17% post earnings.

OnDeck announced a slight drop in both revenue and net income, with revenue coming in lower by 3% YoY at $90 Mn and a net loss of $2 Mn, after its first profitable quarter in 4Q17. OnDeck’s originations increased by 3% YoY to $591 Mn and NIM increased by 130 bps to 31.3%, in spite of rising cost of funds.

OnDeck has navigated the rise in interest rates well with the Effective Yield on its portfolio rising by 178 bps YoY. The net charge-off rate on OnDeck’s portfolio dropped 405 bps YoY to 10.9%. OnDeck’s stock price has enjoyed a 10% rise since earnings.

We include key excerpts below:

KABB 2017-1 is passing all its triggers and has a weighted average yield of 42.9% and a 3-month average DQ percentage of 9.7%. The bonds are locked out from receiving principal for 36 months since issuance and the additional cashflow is used to purchase receivables that keep the weighted average receivables yield for the entire pool above 38% and individually yield at least 19%. 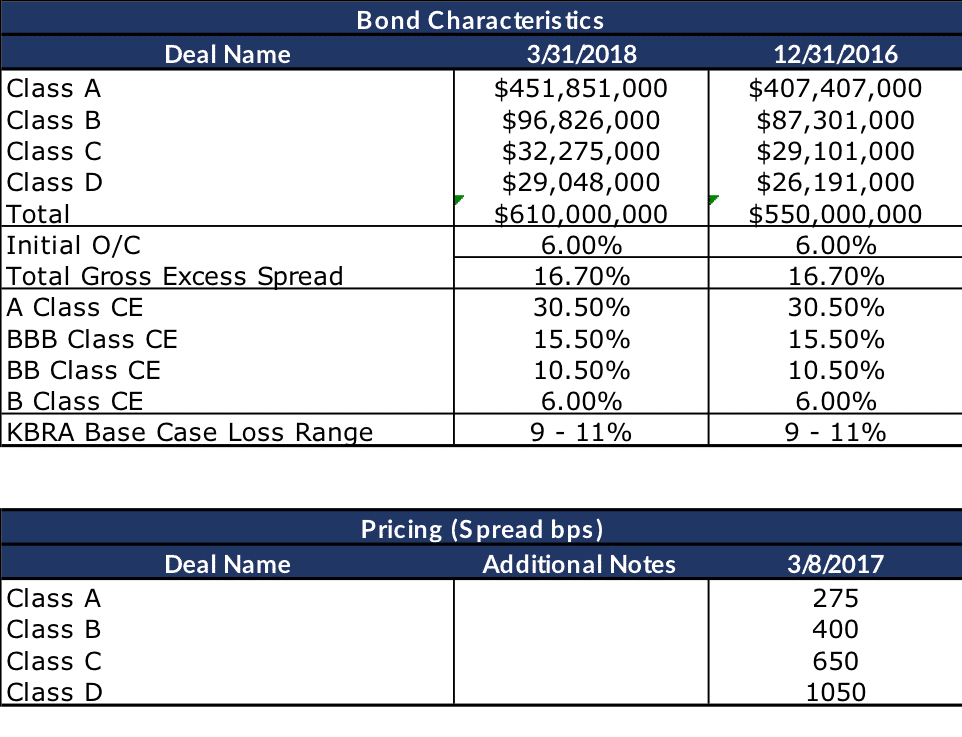 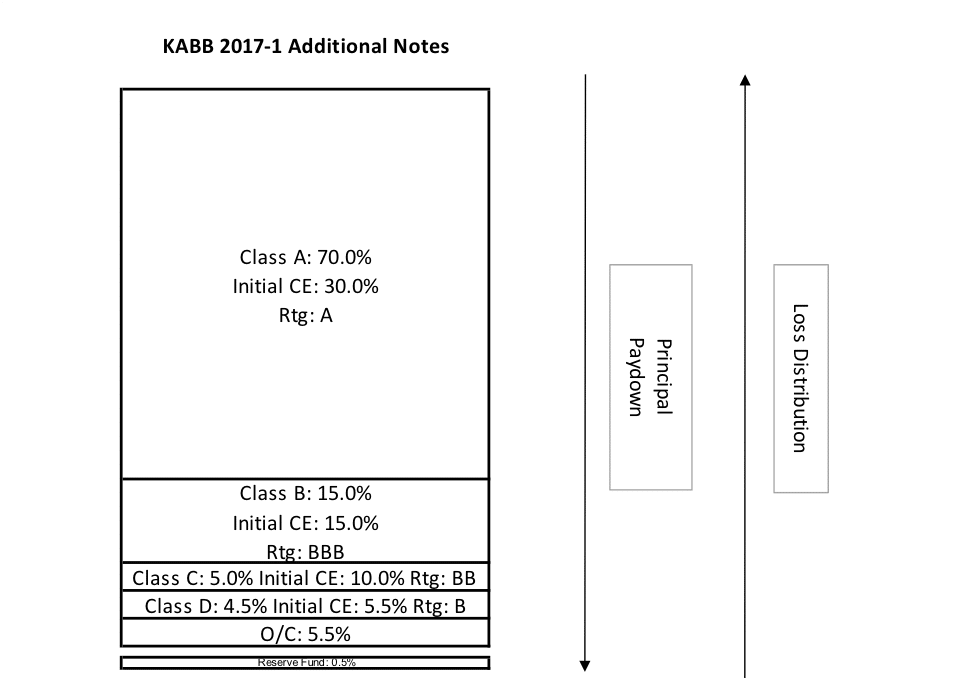