The jobs report confirmed that 20.5MM jobs were lost in April. The U.S. has never lost more than 2 million jobs in a single month.

Weekly jobless claims this past Thursday show an additional 3.1MM jobs were shed for total job losses of 33.5MM. Retailers and brick-and-mortar including J Crew, Nieman Marcus, and Hertz have filed or may file for bankruptcy.

The headline unemployment rate has now jumped to 14.7%. However, the speed of economic contraction means that these numbers are already out of date.

The true unemployment rate is in the 18 to 20% range when you account for i) last week’s jobless claims, ii) reduction in hours worked, and iii) reduction in job seeking activity (only people looking for work fall into the denominator).

Make no mistake, it’s an ugly report. And the numbers get worse the more you dig into it.

More stimulus and rate cuts are coming. Front-end forward rates declined into negative territory for the first time ever. Also, the lockdowns are in various phases of ending. The more relevant question for recovery though is not “when will lockdowns end?” but “will people show up?”.

The Contrarian View is Going Mainstream

We argued on April 6th that the recession and its effects would be different this time.

We also did some basic math taking the view that U.S. consumers would hold up better than 2008, despite the higher unemployment rate. We showed that consumer disposable incomes are higher under some reasonable assumptions and the consumer will be more resilient than people expect. (Not so much for small businesses.)

Since then, GS economists have done a lot more math.

They published a research report showing that personal income will be higher in 2020 (by about 9%), due to the massive fiscal response.

Here’s a chart that says it all – provided that you have super vision: 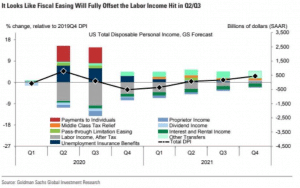 The GS economists’ key assumption is that there will be a phase 4 package of $550Bn.

That’s a safe bet. House Democrats are proposing $750Bn+ in much needed aid for state and local governments and Senator McConnell is constructive.

In industry news, Charles Schwab is taking aim at Robinhood with the introduction of fractional share “slices.”

Schwab has almost single-handedly re-shaped the terms of industry competition. If you could see us now, we would be gushing.

Do we see a Schwab digital wallet next?

LendingClub reported earnings this past week. LendingClub made some good, painful, and necessary moves over the last 6 weeks:

Can Other FinTechs Replicate LendingClub’s Playbook?

The first question on the earnings call was (paraphrasing): “Given the new environment, does it make sense for LendingClub to buy a bank, or for a bank to buy LendingClub?”

Management provided a lengthy artful reply to indicate “No, we aren’t for sale.” However, if you read the transcript a few times, like a Rorschach a few times, it seems like you can walk away interpreting whatever you want to interpret, which was probably the point. 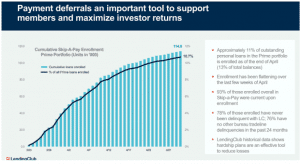 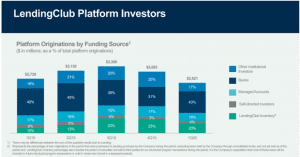 PayPal is hitting records during COVID-19. The stock was up 14% after announcing and has an all-time high market cap of ~$150Bn.

PayPal has been a direct beneficiary of COVID-19 in so many ways:

PayPal is focused on a digital wallet (along with every other Big Tech).

In financing news, digital bank Revolut is on the hunt for acquisitions. They intend to use its recent $500MM warchest to fund deals.

Peter Thiel-backed digital bank N26 raises another $100MM. The startup, led by CEO Valentin Stalf, raised another $100MM, which is an extension of its Series D funding that was announced last year.

The investment is backed by existing investors such as Chinese tech giant, Tencent and Peter Thiel’s Valar Ventures. It brings the total raised in that round to $570MM, while the company has now raised $770MM to date.

N26 already topped up its Series D round with another $170MMin July. The startup’s valuation remains unchanged at $3.5Bn, despite the injection of new capital.

Robinhood Raises $280M, Pushing its Valuation to $8.3B. Robinhood, led by CEO, Wes Moore, raised $280MM in Series F funding. The funding brings the company to an $8.3 billion valuation.

Robinhood recorded around $60MM in revenue this March, three times its February result.

A few typos in our analysis of the OneMain vs OnDeck last week – in our haste to get out this product in a timely manner with the latest and greatest.

Jay Patel. Jay is currently a Data Analyst on PeerIQ’s Data Insights team. Prior to joining PeerIQ, Jay worked as an analyst in the datacenter space and has also worked as an engineer doing electrical design. He earned his B.S. in Electrical and Computer Engineering at Rutgers University. In his free time, Jay enjoys playing volleyball and gaming on his PC.