In macro news, capital markets were rattled due to the continued spread of the Coronavirus to U.S. markets. Former Fed Chair, Janet Yellen, has indicated that it is “conceivable” that the covid-19 virus could throw the U.S. economy and Europe into recession. Former Fed governor, Kevin Warsh, expects a global coordinated central bank response.

The market’s VIX fear index hit 47 – a level seen during the depths of the 2008 financial crisis. 10-year Treasury yields dropped to a  record low of 1.16% (a whopping  ~50 bps lower than a GS Marcus savings account).

The effects are starting to ripple into U.S. lending and payments markets. Small to medium-sized businesses in China, South Korea, and increasingly Japan, are at risk due to supply chain disruptions. Here in the U.S., Mastercard shares dropped 3%  due to the expected impact of the coronavirus on 2020 revenue.

Last week, we saw multiple announcements following the “on your mark, get set, go” sparked by Charles Schwab’s acquisition of TD Bank.

Overall, the theme of major incumbents is to acquire established FinTechs: Visa/Plaid (Jan) and Morgan Stanley/E-Trade. We also have the “man-bites-dog” LendingClub buys Radius Bank deal, motivated by deposits and fee savings.

Intuit continues to not-so-quietly build a lending juggernaut. Intuit has a natural reach into both small businesses and consumers with its captive acquisition channel and unique data assets (QuickBooks, TurboTax, Mint, and other products). Maybe JP Morgan should buy Intuit?

Jamie Dimon announced JPMorgan Chase is on the hunt for its next big non-depository acquisition. Dimon commented that: 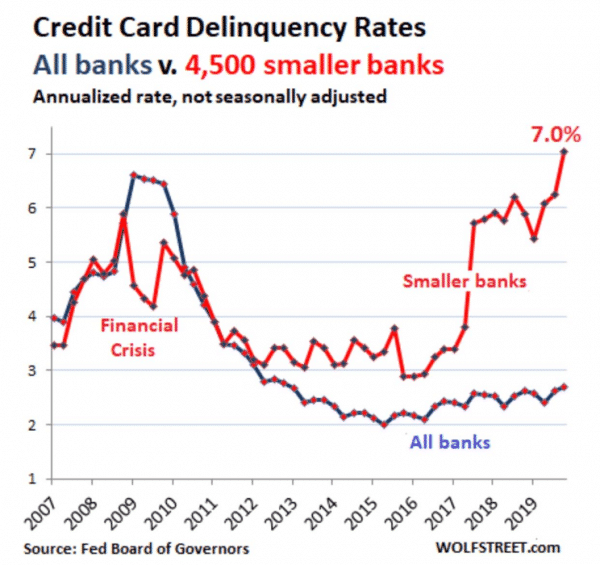 Source: Fed Board of Governors, PeerIQ

In this week’s “Chart of the Week,” we look at the delinquency rates of all banks vs. small community banks. Community banks are reaching for yield and at the same time taking on more risk. Reach out to PeerIQ to learn more about using the TransUnion dataset to evaluate performance, losses, and other metrics by originator type across various cohorts and risk bands.

Founded in 2015, Revolut initially gained popularity by letting users spend money abroad without paying steep fees. Its competitors include British firms Monzo and Starling, as well as German rival N26, which recently said it would leave the U.K. due to Brexit.

Rohan Tandon. Rohan is a Backend Software Engineer on the CFM and metrics team at PeerIQ. After completing his bachelor’s degree in Computer Science at the University of Massachusetts, Rohan moved to NYC to work in the FinTech industry. In his free time, he watches soccer and cricket. Rohan is also a fan of the Arsenal Football Club and loves to play the guitar.