Recent news reports would have investors believe that the entire online lending sector is in trouble – when in fact, default rates remain largely in line with expectations and securitizations of consumer and student loans are on the upswing. And while many reports paint the entire online sector with a single brush, asset-based lending (such as collateralized real estate loans) is a different animal from consumer credit lending — a key distinction for investors.

I previously wrote about the more recent issues at LendingClub, a prominent consumer credit lender, and how these issues were a setback for the industry. The abrupt resignation of its CEO seems to have resulted from a mishandling of an investigation concerning a certain $22 million loan portfolio, as well as insufficient disclosure of his interest in a company in which LendingClub had invested.

Yet most alternative lending startups continue to experience phenomenal growth. While some might argue that the valuations of some “FinTech” firms have gotten too pricey, the underlying business growth at many of those firms has been exceptional. The industry’s aggregate growth rate has in fact remained both strong and steady, and securitizations of pooled loans sold to institutional investors have continued to increase. 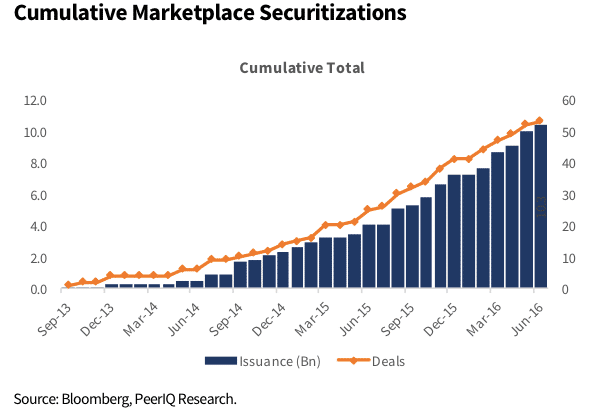 Social Finance (SoFi), a lender that initially focused on the student loan market, had such overwhelming borrower response to a recent Super Bowl ad that it had difficulty meeting the surge in loan demand. And PeerIQ, a research group, reported that marketplace lending securitization volume stood at $3.2 billion for the year to date in Q2 2016 – a 77% increase from the $1.8 billion done in the prior year.

The explosive growth in the online lending sector has created concerns that such growth has been due to problematic underwriting practices or expensive marketing programs. Some of the recent press reports about the consumer online lending sector note some upticks in default rates and wonder about deteriorating credit quality. The LendingClub incident also helped to further decelerate loan purchases from institutional investors, on which peer-to-peer firms have been growing more reliant; these institutions also seem to be asking additional questions about credit risk and lending practices.

It’s true that charge-offs are ticking up for some consumer credit lenders. As of May 2016, Prosper had charged off, from year-ago loans, about 4.2% of loan principal amounts; at LendingClub, gross charge-offs of its top-graded loans ticked up to 1.51% from 1.46%, while charge-offs of its lower-graded loans went to 6.31% for year-ago loans from 4.58% on loans that had been originated in 2013. These numbers are nowhere near the double-digit charge- offs seen during the financial crisis, but the trend has caused institutional purchasers to re-think how these loans compare with some popular bank offerings, even though banks’ charge-off rates have also ticked higher in 2016 versus their low in 2015.

The growth outlook at some of these firms has been trimmed as a result of this less certain funding environment. Each of LendingClub, Prosper and Avant have recently announced layoffs.

The larger economic environment still seems to be one of the biggest obstacles to the sector, though. Even the world’s largest asset manager, BlackRock Inc., experienced in Q2 2016 its weakest inflow of net new money since a year ago. And if these consumer loans are riskier than first believed, then pricing will likely change as a result. The market hasn’t shut down, but adjustments may be necessary.

Pricing of Securitized Bonds Can Be Tricky

Much of the pricing movement from these consumer marketplace lenders occurred, in fact, in response to the asset-backed securities markets, where bonds are often split into an “A” piece (safer but lower returns) and a “B” piece (more risky first loss position, but higher returns). If the pricing on these tranches isn’t well-calculated, so that the weighted-average coupon on the inbound pooled loans and that of the outbound residual bond payments are sufficiently related, then the securitizations market will dry up, since buyers of both bond tranches have certain expectations as to investment results.

An increase in interest rates on the underlying collateral pool can sometimes help to balance the pricing of downstream bond tranches – and that’s what we saw from marketplace lenders over the last year. Retail lending rates can, of course, rise in response to other factors as well (Fed rate hikes, global developments, and increased delinquencies), but getting the pricing right on securitizations of pooled loans seems to have been the predominate factor recently for marketplace lenders.

On that front, the market seems to be increasingly getting it right. In May, SoFi received a triple-A rating from Moody’s on a $380 million deal that repackaged loans into bonds. It was the first securitization by an online lending startup to get the top rating from Moody’s. The deal likely presages the continued normalization of the markets.

In the real estate sector, there are additional differences, since loan underwriting turns more on the nature of the underlying property (asset) than the credit worthiness of the borrower. By taking a mortgage on the property, lenders on real estate provide themselves with some level of security – a feature of real value if the borrower turns out to be less than reliable. Because real estate loans are secured by the subject property, they typically involve significantly less risk compared to unsecured consumer loans, at least in the eyes of most sophisticated investors. There’s never any assurance against a widespread drop in asset prices, which would adversely impact asset- backed loans, but the relative infrequency of such events, together with the presence of a significant equity “cushion” on most individual loans, generally acts to mitigate such risk.

Real estate loans are rarely made for more than the purchase price of a property (although with distressed properties, there can be exceptions). There is nearly always some equity “cushion” – the borrower’s own skin in the game – that provides the lender with a buffer should something happen to the property or if the real estate markets take a dip. Not only are defaults less likely when the borrower is in a first loss position, but the change in asset value must be more severe before the lender is adversely affected. In addition, because many properties are originally acquired from distressed sellers or banks, or cannot be conventionally financed because they require rehabilitation, discounted acquisition prices often provide an additional margin that can be realized once a rehabilitation is complete.

Thus, debt investments offered by RealtyShares and other real estate marketplaces are different in nature from consumer credit loans offered by the most prominent players currently in the “crowdfunding” or “peer-to-peer” sector. The loans are primarily based on the asset value of the underlying property, which can be estimated by reviewing comparable properties; are secured by that property via a related mortgage or trust deed; involve an equity cushion that mitigates the risk of default; and generally also include a personal guarantee from the borrower to create even more security. While lenders and investors are bound to analyze imperfectly the various risks involved with making such loans, the risks are inherently lessened by these key features of secured real estate.