FinTech financings and M&A continued this week. PayPal acquired Swift Capital, a provider of working capital to small business owners. PayPal cited Swift’s talent and capabilities as rationale for the transaction, as well as a desire to strengthen PayPal’s overall merchant value proposition. We note that PayPal invested in LendUp just a few weeks ago. The payment processor appears keen on bulking up its lending footprint to compete with rivals Square, Affirm, and Amazon Lending.

On Thursday, it was announced that KKR agreed to buy Australian non-bank lender Pepper Group for $518 Mn. Vyze, which offers a tech solution for point-of-sale financing, announced a $13 Mn investment led by Austin Ventures. Lastly, Coinbase, the cryptocurrency brokerage and exchange, has raised $100 Mn at a $1.5 Bn valuation.

This week, both Lending Club and OnDeck reported and exceeded analysts’ earnings estimates for Q2 2017. Both companies are approaching the key milestone of positive GAAP earnings. We take a closer look at their financial results below.

After a rough 2016, Lending Club has regained investor confidence with net revenue and originations at their highest levels since Q1 2016. As of Friday’s close, Lending Club’s share price was at $5.90, up 20% from its recent low of $4.92. A key success in Lending Club exceeding expectations was the CLUB securitization which netted $3.7 Mn–a key driver of Lending Club’s $4.5 Mn in Adjusted EBITDA this past quarter.

Buoyed by the success of their first securitization (CLUB 2017-NP1), Lending Club intends to continue their ABS program, and intends to achieve GAAP profitability at the end of 2017. Lending Club’s Q2 quarterly net revenues currently stand at $140 Mn. The net revenue number is running neck-and-neck with SoFi, who reported $134 Mn revenues for the quarter (although it is unclear if SoFi is reporting net revenue).

OnDeck moved to a positive adjusted Net Income ($1.5 Mn) and generated gross revenue of $86.7 Mn (up 25% year-over-year). OnDeck has focused on tightening credit underwriting and cost rationalization; consequently, originations were down for the quarter to $464 Mn (from $590 Mn last year). OnDeck has successfully executed its $45 Mn cost rationalization plan and expects operating expenses of ~$40 Mn for each of the next two quarters.

During Q2, OnDeck hit a significant milestone with JP Morgan Chase. After a successful deployment and scale out period, Chase and OnDeck have entered into a new four-year contract. In the contract, OnDeck will provide the technology powering Chase’s online lending to small business customers. OnDeck alluded to future partnerships with other banks during analyst Q&A. We note this business model presents a new scalable revenue stream that does not carry the same capital and credit risk management burdens.

Net Interest Margin and Net Interest Margin after Losses have fallen to their lowest points in recent times. If you look at the chart below, you can see NIM fell 70bps and NIMAL fell 8.2% when compared to Q2 2016. A large contributing factor to this is Net Charge-Offs by quarter which has hit a recent high of 18.5%. We would expect charge-offs to decline in future quarters and NIM to expand due to management actions to tighten credit underwriting and cost rationalization. 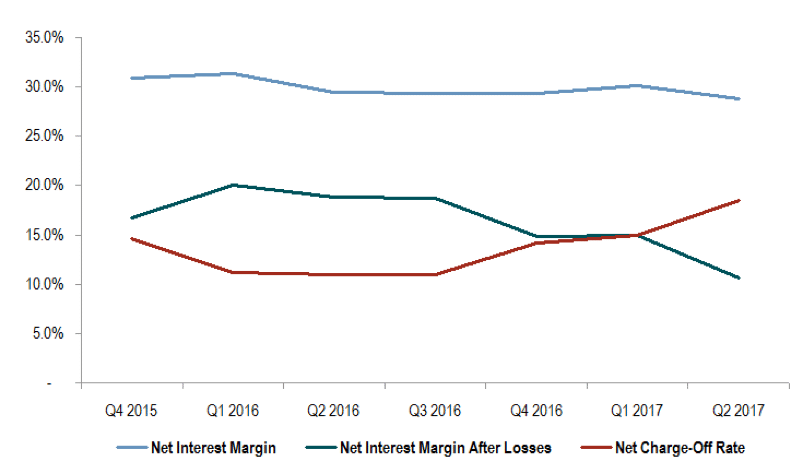 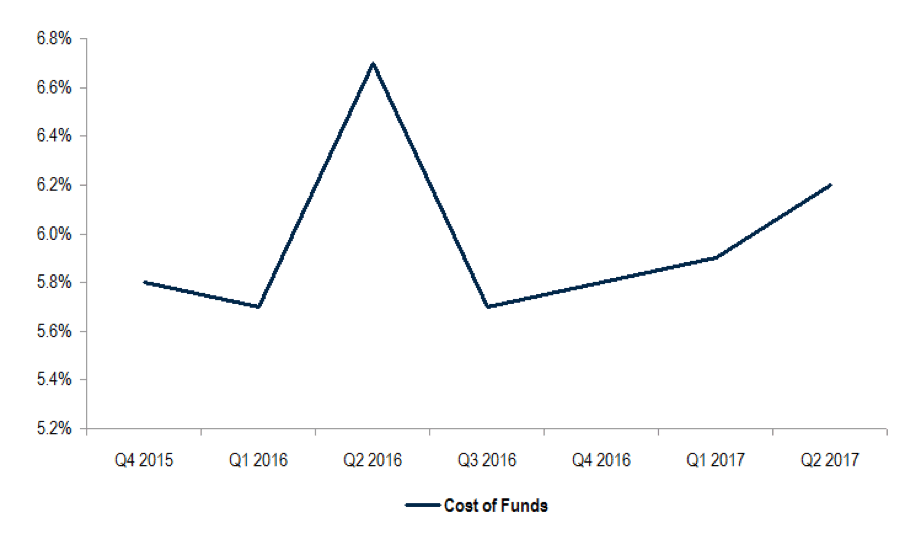 Over the last twelve-months, OnDeck has increasingly tapped warehouse finance. OnDeck extended the maturity date of its $100 Mn credit facility with SunTrust Bank to November 2018 and decreasing the facility’s funding cost by 50 basis points. OnDeck also extended the maturity date of another facility to May 2019, increased the facility’s borrowing capacity to $100 Mn, and decreased its funding costs by 200 basis points.

Over the past year, OnDeck has moved almost entirely away from funding via their marketplace model which now stands at only 2.3% of total originations. (Please see this blog post where we compare the funding mix for OnDeck vs. other non-bank lenders.)

Taking a step back, both Lending Club and OnDeck have made significant shifts in their funding mix. Lending Club has moved from a pure marketplace model to adding securitization as a funding component. We see both moves as continued evidence of our founding hypothesis that consumer credit is transitioning to the capital markets.