On July 22, 2015, Citigroup announced that it is sponsoring a rated securitization of a loan pool originated by Prosper Marketplace, Inc. The transaction, called Citi Held for Asset Issuance 2015-PM1 or (CHAI 2015-PM1), is expected to close in August 2015. Notably, CHAI secured an A3 provisional rating on its senior tranche by Moody’s, a first for P2P consumer loans and three levels higher than the Baa3 rating granted to the last major securitization of Prosper loans: BlackRock’s CCOLT 2015-1 deal from February 2015,

In this piece, we briefly delve in the details of the CHAI transaction, compare it to CCOLT, and assess what this new deal portends for the future of P2P securitizations:

There are many similarities between the transactions: CHAI’s asset pool and liability structure, upon deeper review, are almost identical to the CCOLT deal.

There are some key differences too, including the (i) balance sheet impact of a potential sale, (ii) roles and responsibilities, and (iii) default definitions. Further, CHAI has some unique characteristics that contributed to its Class A notes’ rating. The backup servicer for the deal is a highly rated institution – namely, it is Citibank N.A. – which should give ratings agencies and investors confidence that the deal will perform as expected in a stress case. 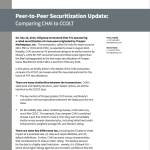