PeerIQ released the new Lending Earnings Insights report this past week. On a quarterly basis, following earnings announcements, we analyze lender performance and pore over earnings transcripts to identify changes in credit performance data.Reach out to PeerIQ research & analytics team if you’d like to learn more. 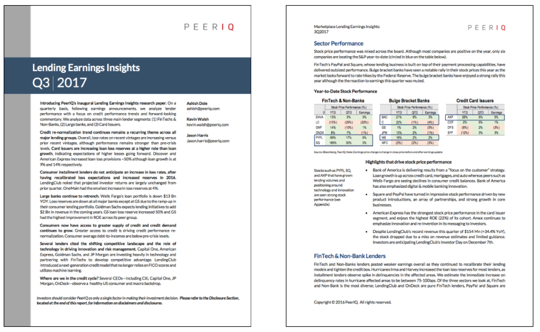 The Cleveland Fed retracted its highly contested study on online peer-to-peer loans. The news is a victory for Nat Hoopes, Executive Director of the Marketplace Lending Association, who published an op-ed in the American Banker “Why Cleveland Fed Should Retract Its Online Lending Study”.

In M&A news, TransUnion acquired Factor Trust, a predictive analytics and risk scoring firm. The move provides TransUnion with access to the largest database of short-term and small-dollar loans. Overall, the transaction reinforces TransUnion’s position as a provider of alternative data and enables financial institutions to better segment risk across the credit spectrum.

SoFi announced that it priced its largest consumer loan deal. SCLP 2017-6 was a $727 Mn issuance, making it the largest offering of securities backed by consumer loans. Investor acceptance continues to grow as measured by broadening participation, declining subordination levels, and upgrades on seasoned deals. Erica Dorfman, VP of Capital Markets at SoFi, reports that 5 new institutions joined the offering bringing total participation to 39.

Marlette completed its fourth securitization since August 2016. Marlette has now funded over $1 Bn in personal loans, and completed its fourth securitization of $312 Mn.  Goldman Sachs led the deal while Citigroup and DB were joint book-runners. This was Marlette’s first deal to include a D-class, which was rated BB by KBRA. The deal contained loans originated by Marlette, Goldman Sachs, Cross River Bank and other affiliates. The deal was significantly oversubscribed allowing Marlette to price the deal at the tightest spreads ever (Class A priced at L+75 down from L+100 in MFT 2017-2 which priced in June).

This week, we perform a deep-dive on GS Marcus relying on excerpts from their recent presentation at the BAML Future of Financials Conference and earnings commentary.

Marcus, was launched in October 2016 amidst mixed perceptions from market participants. One-year later, however, Marcus has achieved its $2 Bn origination objective – making it the fastest growing lending platform that PeerIQ tracks.

Marcus is accessing a large consumer credit market, and with bank retrenchment still underway, there is plenty of slack to fill.

GS Marcus expects to originate $13 Bn over three years – the exact amount that Wells Fargo consumer balances have shrunk over the last twelve months as detailed in the PeerIQ Lending Earnings Insights report. GS expects to grow revenue from the Marcus platform to over $1Bn by capturing roughly 6% of the $250Bn unsecured consumer loan market: 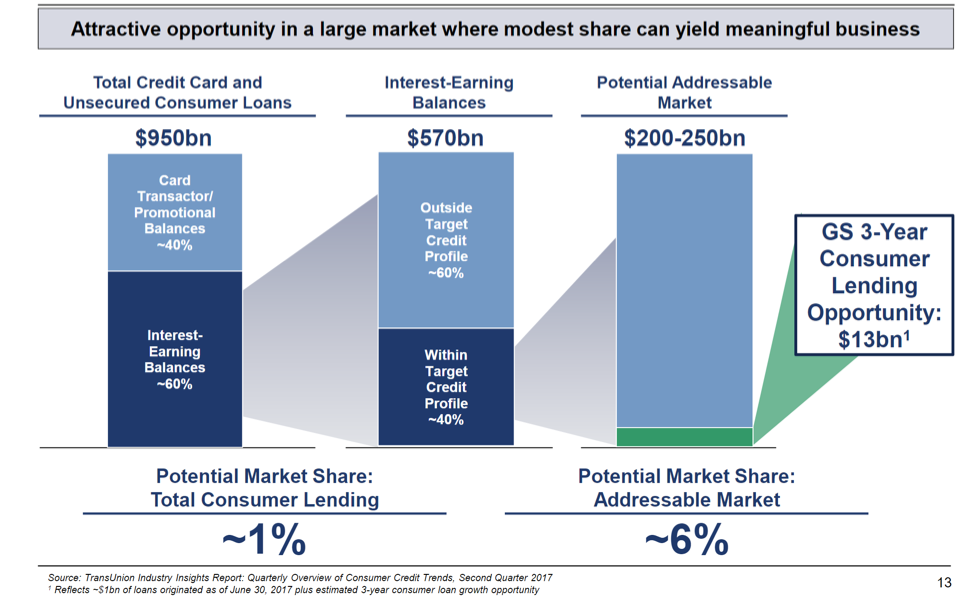 We shared last year that the primary motivation for GS is ROE. Bank ROE’s remain mired in the low-teens due to tough post-crisis capital and liquidity rules.  On the recent investor presentation, Marty Chavez noted that GS expects a mid-teens ROE from Marcus (and 30% ROE from other lending and investment initiatives) – substantially higher than GS’s current ROE of ~11%.

How does Marcus Compete?

Marcus intends to compete first-and-foremost on product and customer experience.  Marcus offers borrowers no-fee loan products and flexibility (like the ability to miss one payment without penalty every 12 months). 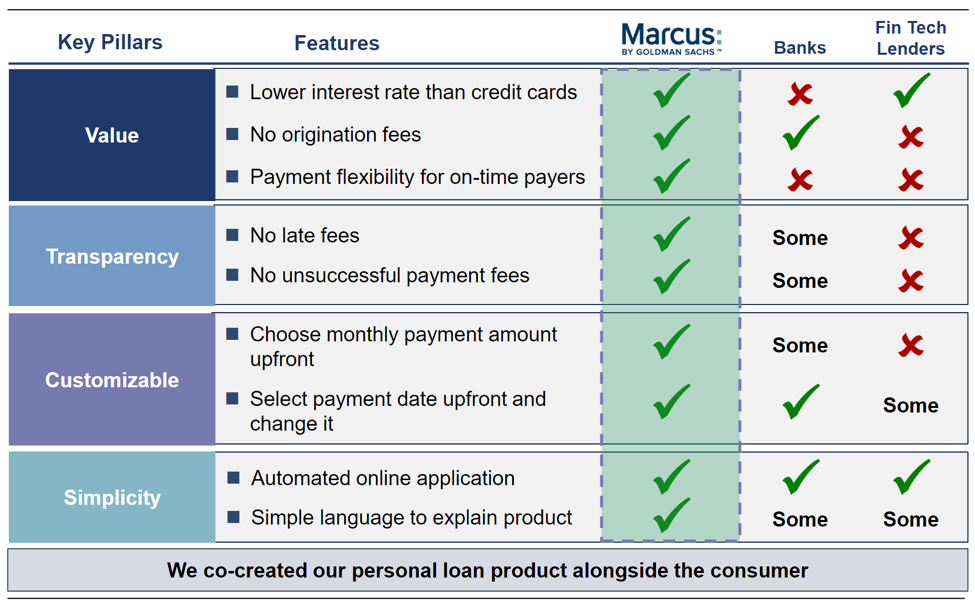 Marcus is taking advantage of its deposit-funded status. GS can more readily extend term, modify loans, and compete on fees and rates in a way that financially-oriented ABS investors with strict servicing covenants, forward flow agreements, and prepayment sensitivities may find difficult.

How Does Marcus Comp to Other Lenders? 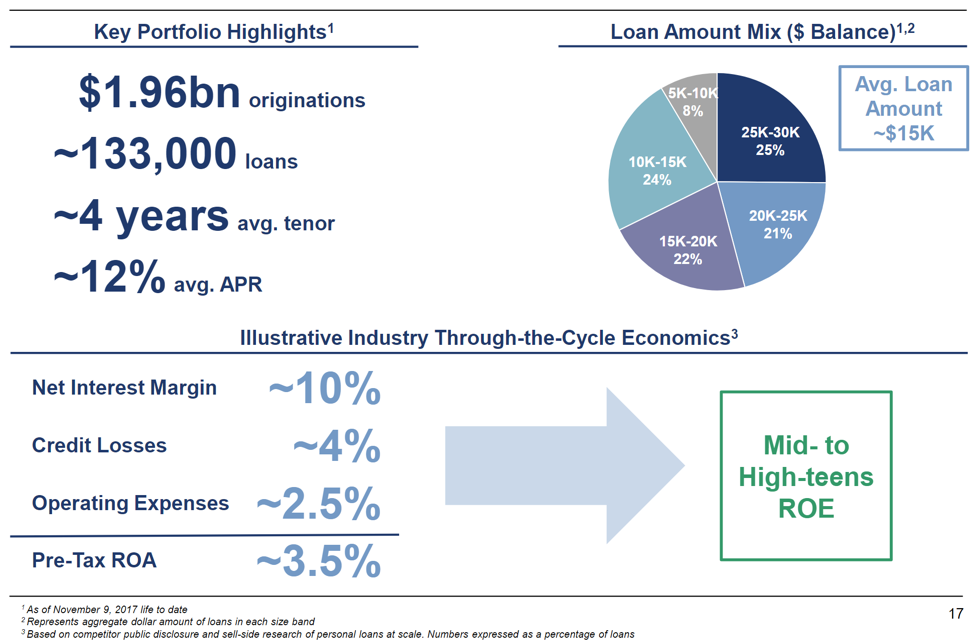 GS CFO Marty Chavez notes that Marcus has an aggressive ~3.5% ROA objective. By comparison, Discover’s ROA is currently ~2.4% and has only achieved a quarterly 3.5% ROA once in the last ten years.

How do GS Credit Loss Expectations Compare to its peers?

Although the statistics look similar, each lender is measuring loss-rates somewhat differently:

What Other Moves May Be In Store?

Notably, in early November, GS Bank announced the US Bank will re-brand to “Marcus by Goldman”. The move indicates that GS intends to deliver a broader range of offerings under the Marcus banner. GS also announced to customers that it will introduce enhance the mobile experience and “improve your financial wellness”.

Away from Marcus, GS is utilizing other levers including M&A and partnering with FinTechs to achieve its lending objectives. GS recently acquired Genesis, and has in the past acquired other offerings complimentary to its business plan (see the acquisition of Honest Dollar). GS also led the recent Marlette securitization (contributed 36% of the collateral in the recent deal) and announced a $300 MM forward flow program with Solar Mosaic.

Overall, the landscape for online lending is dynamic and borrowers are benefitting from competitive access to credit. We believe the long-term winners will have, among other attributes, a competitive advantage in managing liquidity and credit risk. At PeerIQ, we’re excited to play a role in driving standards and transparency for this fascinating and rapidly growing sector.