This week marks the first securitization of LendingClub near-prime loans. The deal is riding the wake of successful issuance and spread compression as evidenced from SoFi and Marlette. It also marks the appearance of a LendingClub branded shelf—LendingClub Issuance Trust (LCIT), suggesting a broader trend of tapping into the ABS markets and a pattern of repeat issuance among MPL originators.

LCIT 2016-NP1 was not rated (bucking a trend of 10 consecutive rated MPL deals), and thus, raises the diligence requirements for institutional investors. Here, we construct the foregoing analysis with publicly available data.

LCIT 2016-NP1 is sponsored by Jefferies and backed by about $135 million of LendingClub (LC) near-prime loans. Reports indicate that the average credit score of the collateral pool is about 640. The deal collateral has a weighted-average coupon of 28.5%.

The loans in LCIT 2016-NP1 are originated under the LendingClub Near Prime Custom Program. The Custom Program consists of loans that do not satisfy the Standard Program credit policy and are only available to qualified institutional investors. According to LC’s Q1 2016 SEC filing, the Custom Program represents 24% of total origination from LendingClub. The Near-Prime (NP) loans have lower average balance and shorter duration than loans in the Standard Program. We show in Exhibit 1 the differences amongst Super-Prime, Prime, and Near-Prime programs.

Comparable Collateral Analysis
How does LCIT 2016-NP1 compare to other MPL ABS executed this year? Neither SoFi nor Prosper deals are a good comparable to LCIT due to their higher average income and credit scores of the collateral pools. Investors may be tempted to compare LCIT 2016-NP1 with OneMain deals (OMFIT) as LCIT 2016-NP1 has an average credit score of 640. OneMain has securitized ~$7.3 billion of subprime unsecured consumer loans since 2014. OneMain Financial, affiliated with Springleaf Financial, has over 1,000 physical branches and lends to customers with credit scores between 600 to 650. OneMain is not a marketplace lender according to the definition in our Securitization Tracker.

Given the characteristics of LendingClub NP loans, we suggest that the collateral LCIT 2016-NP1 may be closer to AVNT 2016-B than other personal loan ABS deals. AVNT 2016-B is backed by loans with an average credit score of 660 and has 18.75%-21.00% base case cumulative loss assumption from by Kroll.

Structural Protection
Analyzing the deal collateral and structure is the first step to understanding the risk of holding MPL ABS bonds. MPL ABS bonds are typically structured with significant credit support, in the form of over-collateralization, reserve accounts, and excess spread, offering bondholders protections against potential losses in the collateral pool.

In the case of LCIT 2016-NP1, the A-tranche has 35.5% credit enhancement, the B-tranche has a 23.0% hard OC (Exhibit 2). Moreover, given the short WAL of 0.75 years, the A-tranche holder should expect credit enhancement to improve significantly beyond the 35.5% level a year from today. The accelerated deleveraging on A-tranche provides significant credit loss protection for the bondholder. B-tranche holder benefits from excess spread as well as over-collateralization.

Exhibit 2 compares the structure of various deals and it is easy to see the differences in LCIT 2016-NP1 as compared to OMFIT 2016-3. 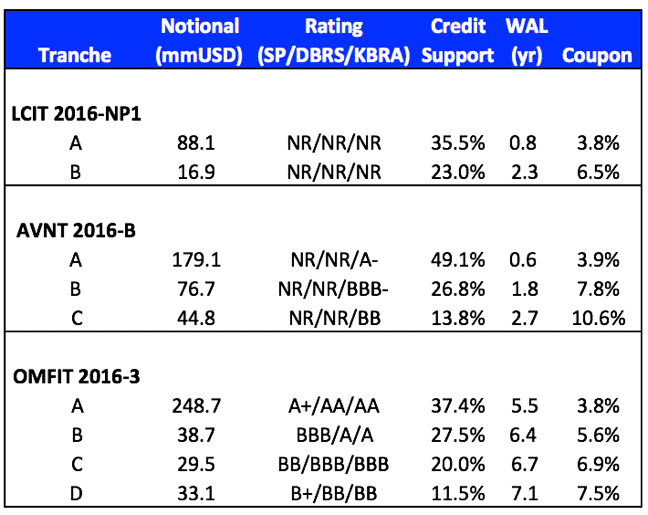 The 6.5% coupon on the B-tranche is comparable to the loss-adjusted return of owning Standard Program whole loans. Furthermore, under Basel III risk-weighted asset requirements, unrated securitizations are subject to supervisory formula approach. Dealer financing desks may have difficulty in providing leverage to unrated tranches in LCIT 2016-NP1.

Collateral Performance
We attempt to analyze the prepayment and default speeds for the NP loans in the Custom Program. Since data on the performance of Custom Program loans is not publicly available, we analyze the 36-month F-grade cohort of the Standard Program as a proxy. LendingClub’s Standard Program originates loans in grades ranging from “A” to “G” in order of increased credit risk. Exhibit 3 shows that 36-month F-grade loans have lower average credit scores (680) and higher average loan coupons (24%). The coupon rate on the F-grade loans is double the average LendingClub coupon rate.

Exhibit 4 compares the 1-month Conditional Prepayment Rate (CPR) for LendingClub borrowers to the Standard Program across loan grades. Riskier credits run almost similar prepayments as compared to the average loan pool in the initial life of the loan. Rapid prepayments early in the pool will pay the A-tranche down very quickly, which has 0.75 year expected WAL. Prepayments reduce as F-grade loans season, and the CPR curve runs below that of A- and B- grade loans. 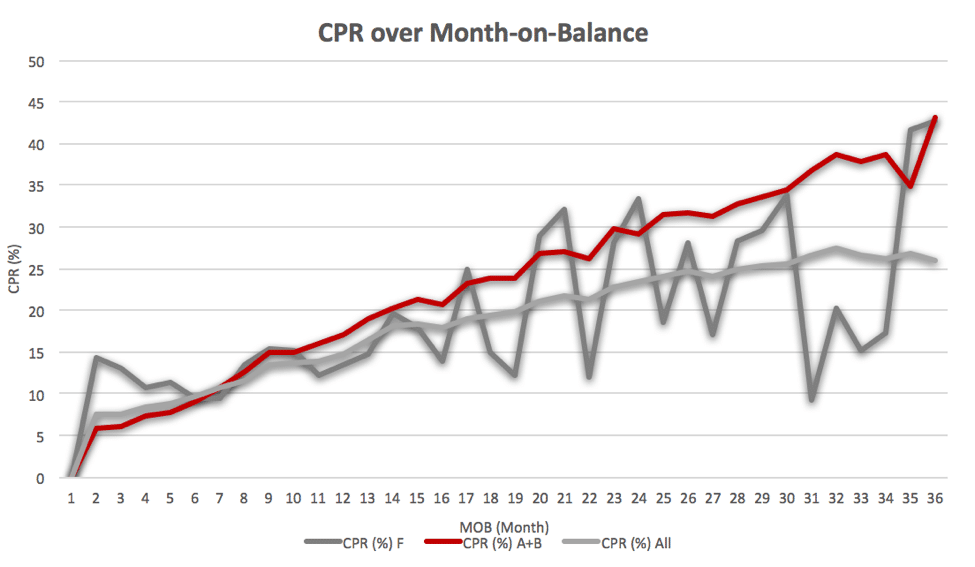 In Exhibit 5 we show the 1-month Conditional Default Rate (CDR) for all LC borrowers, F-grade, and A- and B-grade loans in the Standard Program. The CDR of F-grade loans tends to ramp up quickly in the early part of loan life or Month-on-Book peaking at ~25%. Since the F-grade loan borrowers are paying an average interest rate of 24%, the weaker credits exit the pool through charge-off in the early part of loan life, leaving strong credit borrowers in the pool. The CDR fully ramps up around MOB 8 and levels off between MOB 9 to 22. In the last year of the loan life, the default rate decreases, reflecting credit burn-out behavior for the F-grade loan borrowers. We expect to see similar behavior in the LCIT 2016-NP1 pool.

Investors should expect a high default rate during early years of the deal. We expect the cumulative losses for 36-month LCIT 2016-NP1 loans will be approximately low to mid-twenties given the mild seasoning and shorter collateral WAL. 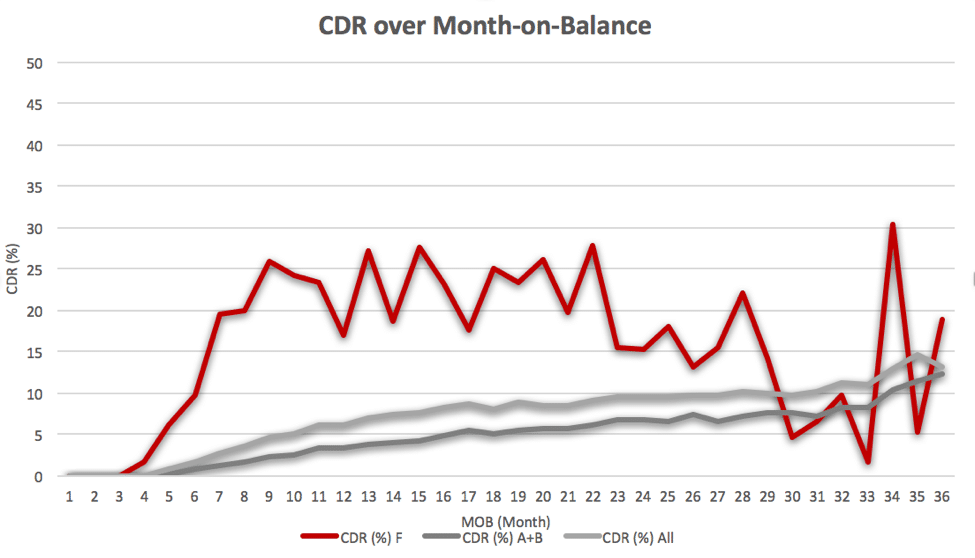 We note that the transparency we observe in the whole loan market disappears for private or Rule 144A securitization transactions. In analyzing LCIT 2016-NP1, we have relied on sparse information from news media and on our own expertise and analytics to interpret and synthesize the available information. We believe that transparency reduces informational asymmetries, promotes price discovery, and improves liquidity.

PeerIQ, along with SFIG, supports self-regulatory efforts to improve loan transparency and standardization on ABS deals in order to encourage the smooth functioning of the ABS markets.

We are very excited to introduce two new members to our team this month!