Are there lessons to learn in contrasting the initial pricing of SoFi’s SCLP 2016-1 with Citi’s CHAI 2016-PM1?

Clearly, the latter executed under extremely challenging market conditions at the end of Q1. Poor market conditions explain a great deal of wider initial pricing on the CHAI 2016-PM1. Are there other non-market factors also at play?

To recap, SCLP 2016-1 was SoFi’s first rated securitization consisting of its own unsecured consumer installment loans, and its second unsecured consumer installment loan deal overall. CHAI 2016-PM1 was executed in March 2016 and was the 4th deal issued by Citi consisting of Prosper loans. We have analyzed the seminal CHAI shelf extensively in prior newsletters and in the Q1 Securitization Tracker.

SCLP 2016-1 advantages include a much larger pool size. A large pool size and a pattern of repeat issuance expands the market. The expectation of significant repeat deal volume makes it worthwhile for buyers to commit resources; significant data and analytics investments are required to model deal economics under various prepay and default scenarios.

SCLP 2016-1 also has a higher credit quality as evidenced by higher average FICO scores, higher average incomes, and higher home ownership levels. SoFi also removed any loans that missed three payments before including in the collateral pool which is another way of demonstrating “skin in the game.”

The last CHAI deal has a shorter weighted average original term at 44 months as compared to 70 months for SCLP 2016-1. There are two benefits to shorter-term loans. First, all things being equal, shorter term loans tend to have lower losses due to selection effects. Second, the combination of short-term loans with a sequential pay waterfall creates a structure where senior bondholder risk is rapidly self-liquidating.

The flip-side to the higher credit quality is that SoFi loans have a lower coupon reflecting their focus on super-prime borrowers. Lower coupons for borrowers imply lower excess spread for investors.

There are also several key structural and regulatory differences in SCLP as compared to CHAI: 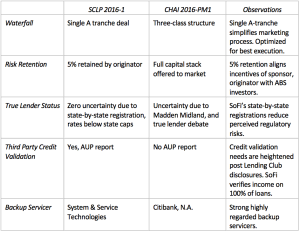 SoFi meaningfully shaped the success of its own deal as a co-manager on the deal. SoFi successfully expanded the base of ABS investors attracting global investors, including buyers whose home markets experience negative rates, and cross-marketed the consumer credit deal to 24 student loan ABS investors.