US GDP growth clocked in at an annual growth rate of 2.9% and the probability of a December rate hike is increased to over 70%. A PIMCO analysis this week illustrates that rising inflation expectations and negative real rates continue to pressure bank profitability, consistent with PeerIQ’s bank ROE analysis.

LendingClub appears to be pivoting to growth. LendingClub CEO, Scott Sanborn, unveiled an auto re-finance product at Money 2020. In a shift from prior business practice, the loans will initially be funded by LendingClub’s balance sheet and servicing will be outsourced–a nice combination should LendingClub choose to tap the auto ABS markets.

In an expected move, noted in our 3Q2016 Securitization Tracker, Prosper increased rates on riskier loans (concentrated in D, E, and HR grades) and lowered rates on high-quality loans following a similar action from LendingClub on October 14th when LendingClub raised rates by a weighted average of 23 bps basis.

On the securitization front, the latest deal from Earnest Student Loan Program (EARN 2016-D), led by Barclays and Goldman Sachs, priced successfully. October marked the first month of over $1 billion in new issuance – an industry milestone that PeerIQ anticipated at a LendIt Europe “State of the Industry USA” panel.

Our forecast methodology is as follows:

Consumer Credit Continues to Expand in 2017

The Great Recession of 2008 was marked by significant consumer credit contraction, with a quarterly reduction of 4% in 2009 as observed in the Federal Reserve Consumer Credit Outstanding Index. Aggregate consumer deleveraging stopped in the summer of 2011 (Exhibit 1).  As the U.S. economy stabilized, consumer confidence and spending also improved. 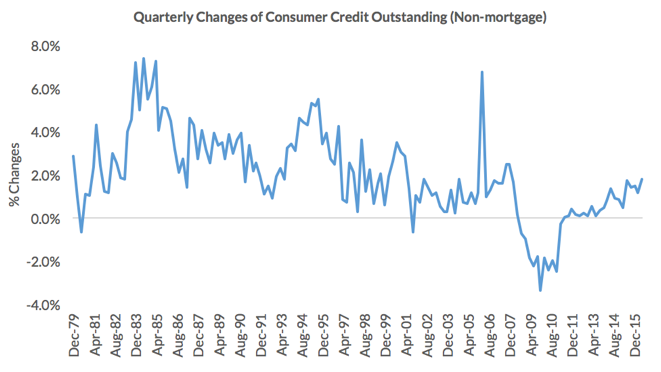 In our base case, we do not foresee a severe negative shock to the U.S. economy, and consumer debt growth stays on the same trajectory as next year. As the U.S. household market moves out of the balance sheet deleveraging phase, we expect an expansion in the total addressable consumer credit market.

Moreover, we are now seven years behind the Great Recession. Consistent with Fair Credit Reporting Act waiting period requirements, “Derogs” associated with bankruptcy, foreclosure, and short sales will fall off borrower credit bureau reports in 2017. As a result, we expect an expansion of credit eligible borrowers.

We turn now from consumer demand to capital supply.  As the economy recovers from the Great Recession and inflation risks increase, the probability of an interest rate hike in December stands at ~71% according to CME Fed Fund futures.

Repeat Issuers Continue to Power the New Issuance Market in 2017

We expect repeat issuers continue to participate in the ABS issuance market next year as they aim to minimize deal cost and optimize capital market distribution:

Looking ahead to 2017, we believe that the MPL ABS new issuance market will continue to be dominated by repeat issuers, such as SoFi, Marlette, Avant, Earnest, CommonBond, and others.

In our base case, the MPL ABS new issuance market will grow about 47% YoY for 2017 and new originations grow 52%. We assume that repeat issuers will issue about the same amount of deals in 2017 as in 2016 and that LendingClub and Prosper will issue at least one ABS deal.Given the repeat issuers makes up about 80% of the MPL ABS issuance, we put our base case new issuance outlook at $11.2 billion, or a $26.7 billion total ABS issuance, backed by $30 billion of loans, by YE 2017.  We ignore growth in the real estate MPL market for this analysis (although we do observe ABS activity with LendingHome and expect others to follow).

Under a mildly bearish scenario where the securitization market dries up for one quarter, we expect established repeat issuers to reduce deal flow by one for the year, and assume Prosper and LendingClub do not tap the ABS capital market in a meaningful fashion.  The MPL ABS market will issue $6.3 billion of bonds, a 17% decline in issuance as compared to 2016. By the 2017 year-end, we expect to see about $21.8 billion total MPL ABS issuance in this scenario.

We expect 114% growth in new ABS issuance and 76% in loan origination growth in the bull case. The bull case scenario sees an uptick in issuance from Prosper and LendingClub as they become repeat issuers under a friendly securitization market environment. In 3Q2016, we note Prosper was in advanced talks with a group of structured credit funds to sell roughly $5.0 billion worth of loans over the next two years.  A meaningful portion of the $5.0 billion origination from Prosper would find its way into the ABS market under this scenario.We assume one deal per quarter using the average deal size from prior deals as guidance to arrive at bullish estimates of $16.3 billion for 2017 new issuance. By YE 2017, Life-to-date MPL ABS market since 2013 would be ~$31.8 billion, and the MPL loan origination since 2007 would be ~$75.6 billion under a bullish scenario.

Overall, we expect the U.S. MPL ABS market to grow in 2017. However, we also want to highlight factors that potentially lead to lower MPL issuance and loan origination, such as risk retention, regulatory uncertainty, and increased bank competition in prime consumer credit segments.

PeerIQ is pleased to announce five outstanding additions to the team: