Regulation is the theme for the month. The SEC will host a public forum to discuss fintech innovation on Nov 14th, including a topic on capital formation.

The OCC is creating a new innovation office headed by its General Counsel, Beth Knickerbocker. The office is expected to start next year. The OCC is also expected to decide on issuing national charters to non-bank FinTech companies before end of year.

WSJ reports that Several VCs including Battery Ventures, Ribbit Capital, and Andreesen Horowitz, announced a $28 MM investment in Cross River Bank (‘CRB’). CRB is a leading partner funding bank for over a dozen online lenders including Marlette, Upstart, and Affirm.  The investment will be used to expand payment and banking services offered to its customers.  In our view, this investment enables CRB to mitigate the regulatory risks associated with true lender by increasing CRB’s on-going economic interests in the loans, and reduce funding risks by strengthening CRB’s ability to distribute loans

The recent investments in CRB confirms a thesis we have introduced over the last several quarters:

Indeed, per FDIC, from 2000 to 2008 there were over 1,000 community bank de novo charters issued. Post-2008, bank formation has slowed to a handful of charters per year. Industry consolidation across the 6,000+ extant community banks is expected to continue.

Cross River Bank was one of the few new charters and was founded in 2008 by CEO Gilles Gade, a former banker at Barclays and CFO of a mortgage lender.

How is Cross River Bucking the Trend?

Cross River has incorporated business model and technology innovation on top of a strong compliance foundation.

In terms of business model, Cross River Bank, along with WebBank, serves as the partner bank for over a dozen online lenders such as Marlette, Upstart, Affirm, and Rocket Loans. A partner bank is the FDIC-insured depository institution responsible for underwriting and originating loans that are subsequently sold to a platform and other investors across state lines.

CRB last year originated over $2.4 Bn in MPL loans – a remarkable accomplishment for a community bank that was initially capitalized with $10 MM in equity during the depths of the Great Recession.

In its capacity as a partner bank, CRB reportedly retains a 10% interest in the loans it originates  to reduce true lender concerns (using its since expanded equity capital base of ~$50 MM). It also facilitates payments, including same day settlement, and offers other banking services.

CRB is also an early adopter of new financial technology innovations. It has partnered with payments companies including TransferWise, Stripe, Ripple, and CoinBase. CRB is reportedly developing an online-only digital bank dubbed ‘Almond Bank’ with a focus on millennials.

What are the economics of Cross River Bank?

In prior newsletters, we made the argument that banks can improve their ROE position by purchasing or financing whole loans using Discover Financial Services as a case-study.

Here we test the hypothesis further:

From Exhibit 1, we observe that:

While the broader banking industry consolidates and struggles to earn their cost of capital, Cross River Bank has expanded NIM (net interest margins) and lowered funding costs over time.

Exhibit 2 shows the increasing basis between NIM and cost of funding since June 2012. The improved NIM and declining cost of funding provides a powerful motivation for non-bank lenders to entertain bank acquisition, and also the converse, for banks to seek partnership or origination of consumer loans. 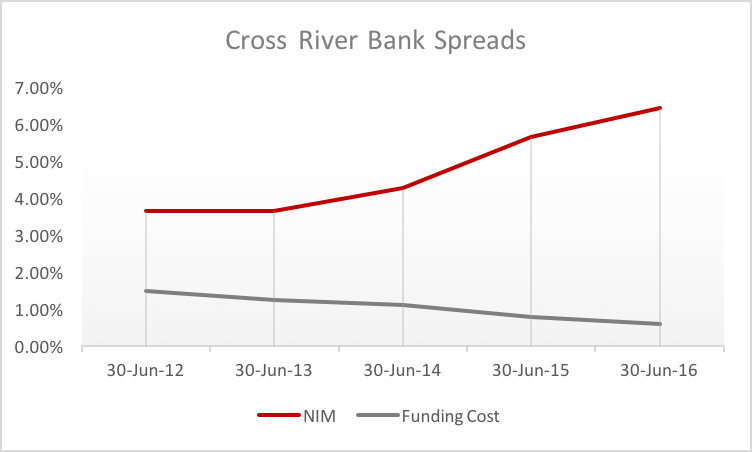 There is a natural marriage in combining low-cost capital with high NIM loans – this combination comes together directly in the business model of Cross River Bank.

What is the Outlook for Cross River Bank? (Or, why would a VC invest in a bank?)

Battery Ventures partner, Scott Tobin, commented in WSJ: “It’s rare that people think, ‘We’ll build another Bank of America.’ But my hope is that Cross River Bank will be a giant bank.” His comment offers a glimpse into the future aspirations for Cross River Bank.

Below, we have listed some statistics to put growth and value in perspective:

Cross River Bank’s pace of asset growth is constrained by equity capital. The $28 MM in venture capital, after leverage via deposits and securitization programs, will enable CRB to provide hundreds of millions in low-cost capital.

While the banking industry cedes ground and profitability to the rapidly growing non-bank sector, Cross River has quietly positioned itself as a direct beneficiary of non-bank lending growth.

Cross River is subject to strict bank compliance standards including OCC and FDIC examinations, KYC / AML requirements, capital and liquidity stress testing, rigorous policies and procedures, and supervisory obligations. CRB, as a bank, has increased credibility when interacting with similarly regulated banks and can play a role in distributing risk to other financial institutions.

Moreover, we expect that, based on recent securitization activity and CRB’s hiring of Geoff Kott, a highly-regarded structured finance executive from Morgan Stanley, Cross River Bank will play an increasingly important role in the securitization market.