This week, we examine continued evidence of the U.S. consumer’s steady recovery, with household income up 0.9% and a record quarterly GDP increase; we share a few thoughts on the latest set of 3Q earnings, with “stabilization” as the key theme at OneMain and others; and, we look at major moves in the industry, with Bread selling itself to Alliance Data and Visa potentially facing an antitrust suit over its Plaid purchase.

The U.S. consumer continues to slowly heal, as a range of economic data showed this week. Initial jobless claims fell to ~750k, the lowest level since the beginning of the pandemic. That improving environment helped boost household spending in September by 1.4% from August – the fastest pace since pre-COVID – while personal income increased 0.9% MoM.

Strikingly, not only have overall spending levels (excluding travel) recovered substantially since April, saving continues to be elevated as well – boding well for consumers’ ability to cover debt service in the near term. 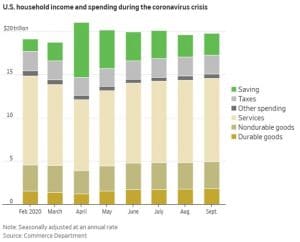 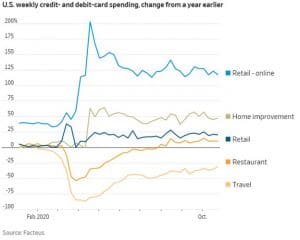 We’re just a few days away from Election Day and already more than 80MM people have casted ballots in this year’s election. In fact, the combination of in-person and mail-in votes through the end of the week is nearly 60% of the total number of votes in 2016’s election, potentially heralding a massive increase in turnout this year.

What Would a Biden Victory Mean for Lenders?

Here at PeerIQ, we don’t pretend to be political analysts, but with a Biden victory looking increasingly likely, it’s time to start thinking about the implications to our industry.

As the adage goes, “people are policy,” and the key positions we’ll be watching are Treasury Secretary and Head of the Consumer Financial Protection Bureau.

Treasury Secretary – Fed governor Lael Brainard, a veteran of the Obama and Clinton administrations, is mooted to be in the lead. A middle of the road pick, Brainard is seen as someone who could bridge the liberal and centrist camps within the party. Another possibility – Rhode Island Governor Gina Raimondo – a former VC with ties to Wall Street. However, that hasn’t stopped speculation about Senator Elizabeth Warren stepping into the role – an unlikely move at this point, but still a possibility.

CFPB – Whether or not we see a Secretary Warren as Treasury, it’s almost certain that Biden will replace the CFPB director with someone more in her mold. Under the Trump administration, the CFPB (effectively a Warren creation) has dialed back significantly from the enforcement policies of the Obama years; we can safely assume the hands-off approach would end under Biden.

Earnings season continued this week, with lenders Citigroup, One Main, and CURO joined by Visa and MasterCard in reporting results.

The theme for the quarter is “stabilization,” across lenders and payments businesses. Our quick takeaways:

1) Credit trends continue to stabilize among the lenders, with all three (OMF, C, CURO) showing improvements to the credit quality of their borrowing base.

In our view, this is impressive performance in light of the broader COVID landscape; we wouldn’t be surprised if OMF takes advantage of their “fortress liquidity” (to paraphrase a Dimon phrase) and purchases attractive assets or dislocated businesses in the coming months. 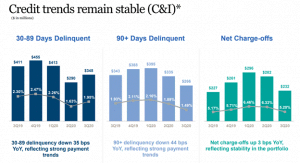 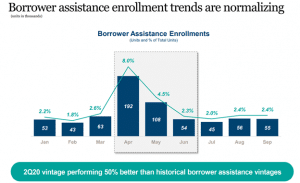 2) Domestic spend continues to shift towards Debit over Credit, with volumes stabilizing (and moving online), while cross-border transactions have collapsed 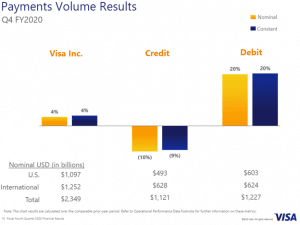 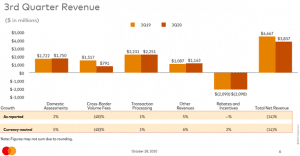 In industry news this week, Bread announced a sale to Alliance Data Systems (ADS), a provider of loyalty and rewards systems. The transaction is valued at $450MM, including $100MM of ADS stock, and gives ADS expanded “payments options and capabilities, giving our brand partners … another way to capitalize on the rapidly growing e-commerce channel.” Congrats to the team on the sale!

In a significant step forward, this week SoFi confirmed that it had received preliminary approval on its bank charter application. In parallel, the firm announced the launch of its first credit card – in partnership with MasterCard – giving customers enhanced cash back rewards when using other SoFi products. Combined, this positions SoFi to significantly broaden the product choices available to its customers, while lowering and stabilizing  the company’s funding profile.

In a legal filing this week, the U.S. DoJ indicated growing scrutiny of Visa’s planned purchase of FinTech platform, Plaid. The $5.3Bn deal, announced January, was seen as a way for Visa to tap into fast-growing payments systems that operate outside the traditional card network – and in a court filing this week, the DoJ noted it’s investigating whether the deal would “allow Visa—the dominant provider of debit services in the United States—to create or maintain a monopoly.”

Finally – and potentially with an eye towards avoiding Visa’s fate – the WSJ reported this week on Credit Karma’s plans to sell its tax preparation business to Square. The move would augment Square’s emerging consumer business – adding to the Cash App offering – while helping defuse antitrust concerns as Intuit looks to close its $7.1Bn purchase of Credit Karma.