J.P. Morgan reported better than expected second quarter earnings, beating on the top and bottom line due to the company’s strong loan growth, partly due to the success of Chase Sapphire Reserve product.

Bank ROE remains mired in single digits and low-teens, well below pre-crisis levels, due to high post-2008 regulatory capital requirements. Large banks with deep credit risk management capabilities including Goldman Sachs and American Express have launched personal loan products to improve ROE. As we made the case in a previous newsletter, regional banks and community banks have a strong economic and CRA motivation to partner with non-bank lenders to achieve their ROE targets.

On the securitization front this week, SoFi filed form 15G with the SEC for its SoFi 2017-D deal. DBRS assigned provisional ratings of Class A, AAA (sf), Class A-2, AAA (sf) and Class B, AA (sf). SoFi also filed documents with the SEC for another $551 Mn student loan deal that will include Deutsche Bank, Goldman Sachs, Bank of America, Merrill Lynch, Mizuho and Morgan Stanley on the deal.

Reports also indicate that FICO credit scores for consumers are at an all-time high as consumer balance sheets and incomes have healed since the Great Recession. Investors are struggling to connect all-time high credit scores with a pattern of higher delinquencies across recent vintages – particularly in auto, student, and personal loans.

In this week’s newsletter, we illustrate the flaw of FICO as a forward-looking credit score.

Below is a histogram showing the distribution of FICO credit scores for Avant’s 2017 deal: 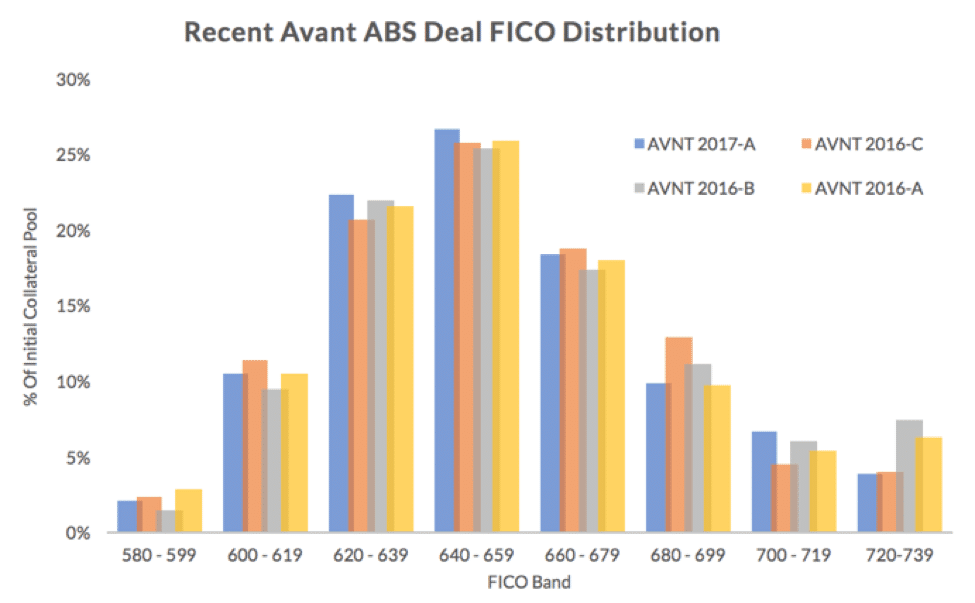 The distribution is relatively similar across historical ABS deals suggesting the credit risk across deals is similar. However, Avant has substantially tightened and improve credit quality in recent vintages. The FICO credit score is not able to capture this. For instance, as compared to AVNT 2016-C, the collateral in the AVNT 2017-A contains loans made to borrowers with a much smaller balance ($5,348 vs $6,589) and a shorter weighted-average remaining term of 33 months vs. 40 months in AVNT 2016-C. Also, AVNT 2017-A has 93.9% of loans under 36 month term, a significantly different collateral pool mix than that of AVNT 2016-C, which has only 47% 36-month loans. Shorter term 36-month loans carry less credit risk than 60-month loans all things being equal.

One of the flaw’s in FICO methodology is that the metric evaluates the borrower’s willingness and ability to pay at across all loan balances – rather than the probability of default for a particular loan given its position in the consumer’s payment priority. A borrower that chooses to default will prioritize certain obligations over others due to convenience effects, differing servicing standards, or the strength of the relationship with the lending institution. The FICO score is unable to (nor designed to) differentiate credit risk at the loan-level.

These issues compound for asset managers and risk officers that monitor risk across tens of thousands of loans and must perform risk aggregation. Summarizing portfolio risk with credit score fails to capture the probability of default risk at a portfolio level.

Fortunately, PeerIQ has developed forward-looking prepay and default curves based on large datasets and modern data science techniques. We are pleased to report now that PeerIQ has such curves developed for over 12 leading lenders including Lending Club, SoFi, Prosper, Marlette, Avant and others. These curves are used for pricing and valuation, stress testing, forecasting cashflows and benchmarking portfolio risk. Feel free to reach out to PeerIQ and learn more!

PeerIQ in the News:
Lighter Fare: