The FTC vs LendingClub, Banking through the Post Office, Dueling Unicorns

GDP for Q1 2018 rose 2.3% annualized, down from 2.9% in Q4 2017. The 2.3% reported for Q1 2018, is slightly higher than the Federal Reserve’s long-term potential rate. GDP  can be decomposed into the product of labor and labor productivity (from technology or trade. As the US enters the late-stage of the economic cycle, full employment combined with flat productivity growth, puts a cap on the speed of GDP growth.

On Thursday, Amazon reported $3.27 EPS earnings well above the $1.26 estimates. The stock jumped 7% to record highs in reaction to the beat. The news comes just days after Amazon invested $22mm into Capital Float, India’s self-proclaimed largest online lender. We recently discussed Amazon’s path to the banking sector via its reported partnership with JP Morgan.

The lines between tech and banking continue to blur. Square announced the acquisition of Weebly for $365 Mn. Weebly’s website-building tools focus on e-commerce solutions. Square hope to compete with banks directly through an industrial loan company charter, which would allow it to operate with some bank privileges without having to comply with more stringent Bank Holding Company Act requirements and  supervision from the Federal Reserve.

In regulatory news, Senator Kirsten Gillibrand, D-NY, proposed legislation that would enable individuals to bank through the local U.S. Post Office. Services offered would include small loans and deposit accounts as large as $20,000. The bill aims to “wipe out” predatory lending in the US through the Post Office’s 31,000 branches nationwide. The concept is nothing new, between 1911 and 1967, the U.S. Post Office offered savings deposit accounts. Internationally, countries such as Japan, China, India, France, Italy, and New Zealand provide financial services through the postal office.

On Wednesday, TransferWise announced the launch of a new ‘borderless’ multi-country bank account and debit card. Opening an account with TransferWise allows you to open a single account, which gives you local bank details for the UK, US, Australia, and Europe. This news came just one week after Bank of England accepted the company onto its faster payments settling platform. TransferWise is the first and only non-bank member of the platform. TransferWise’s core product is the ability to transfer money across borders at a low cost. The company was founded on the idea to facilitate low-cost transfers by matching remittance senders and receivers in the same country.

Just one day after the TransferWise product announcement, competitor Revolut, announced a $250 Mn raise at a $1.7 Bn valuation. While TransferWise focusses on cross border transactions, Revolut provides a flexible debit card that allows simple spending and ATM withdrawals for international travellers. We give a brief comparison of the two companies below. 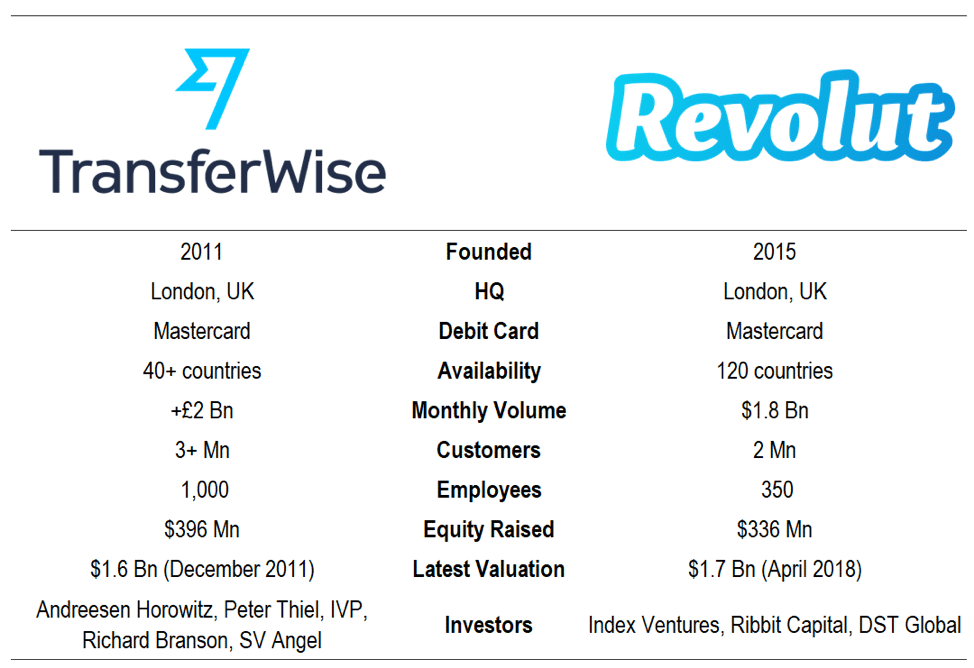 On Wednesday, the FTC charged LendingClub with deceiving borrowers. According to the lawsuit, LendingClub “lures prospective borrowers by promising ‘no hidden fees’, but when the loan funds arrive in consumers’ bank accounts, they are hundreds or even thousands of dollars short of expectations, due to a hidden up-front fee that defendant deducts from consumers’ loan proceeds.” The lawsuit also claims LendingClub “has misled consumers about whether their loan applications have been approved, stringing consumers along by, for example, telling consumers, ‘Hooray! Investors Have Backed Your Loan,’ when LendingClub knew many such consumers would never receive a loan.”

In response to the lawsuit, LendingClub posted a detailed rebuttal, refuting the FTC’s claim. As seen in the image below from LendingClub’s blog post, the company believes they provide borrowers multiple opportunities to understand the Origination Fees mentioned in the FTC’s lawsuit. LendingClub goes on to refute each claim made by the FTC individually. 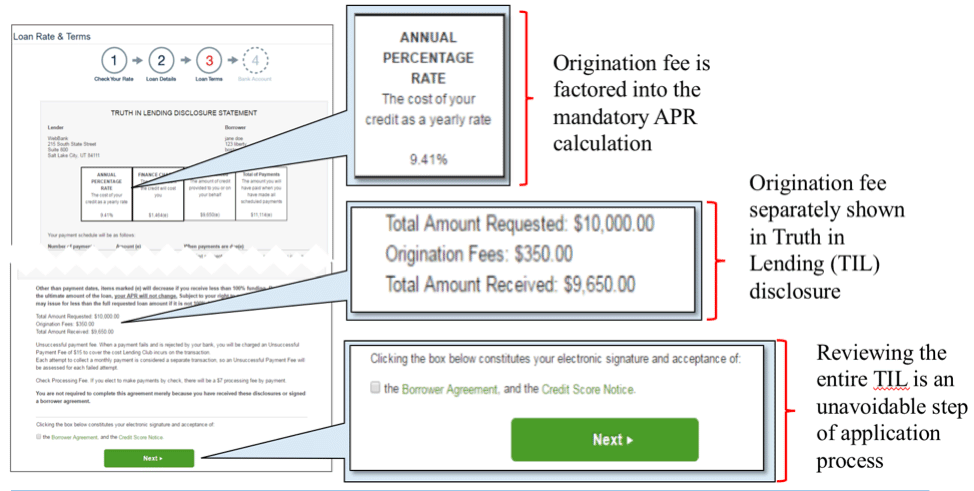 In a post on Lend Academy, Peter Renton questions the cause of this lawsuit, and points to the fact that only two of the five FTC Commissioner seats were occupied at the time of the complaint, and one of the two left on Friday. Renton’s understanding is that LendingClub and the FTC were cooperating and this lawsuit “came out of left field.” Additionally, LendingClub made a point to say the company is “very disappointed that it was not possible to resolve this matter constructively with the agency’s current leadership.”

The FTC has been operating with two of the five commissioners since February 2017. On April 26, the Senate confirmed five new nominees for the FTC. The FTC’s decision to bring charges a day before the Senate’s confirmation of new Commissioners, and just two days before Commissioner Terrell McSweeny’s departure, is reminiscent of Richard Cordray naming his successor and launching an enforcement action immediately before stepping down as CFPB Director.

With new leadership coming to the FTC, this decision could be reversed with the confirmation of the new Commissioners. Whether or not this was a parting shot by the current leadership is unclear; however, much of the damage is already done. Market participants generally view LendingClub as leading on transparency and best practices, and other lenders would have adopted similar marketing disclosures underscoring the need for more regulatory clarity for the sector.

A more general regulatory theme is in the wake of the defanging of the CFPB, we continue to see State AGs and now the FTC step up  enforcement activity.

As of Friday, April 27th 2018, LendingClub continued to attest “There are no hidden fees or charges” on their website.

As marketplace lending funds see increased scrutiny from the SEC, PeerIQ has seen an uptick in inbound valuation requests. PeerIQ offers a comprehensive valuation product, with loan-level valuation, as well as summary statistics to provide accurate and transparent pricing for funds, as well as their LP investors.

In addition to loan level valuation, PeerIQ provides full transparency into the underlying drivers of price change such as rising rates or credit performance. 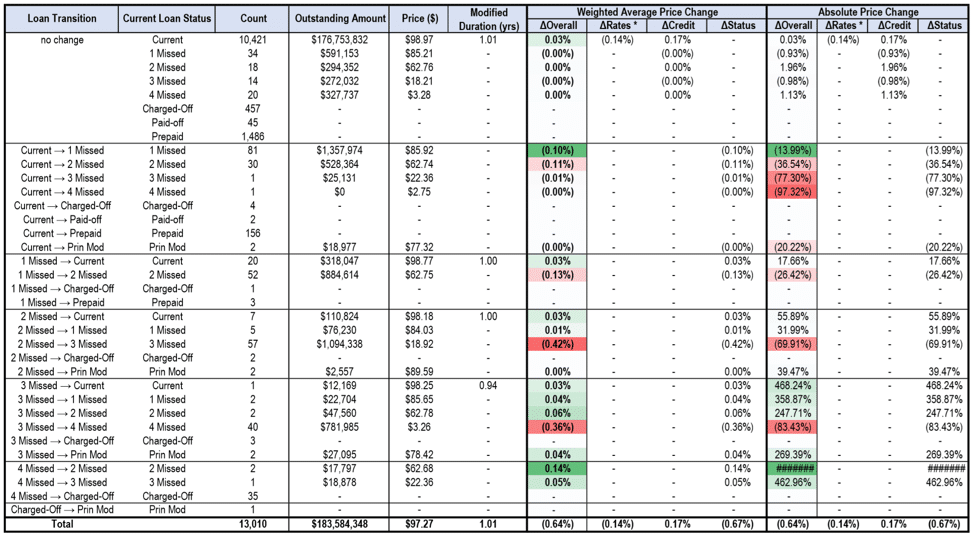 “What is Happening with Personal Loan Losses” on Wednesday May 2nd at 2 p.m EDT. Click here to register and to add the event to your calendar.