The Recession Is Over; Forbearance Gaming At 70%; Goldman Bulks Up

Thank you for spending your precious time with us.

In macro news, it’s time to make the call.

The Recession is Over. What’s Next?

We suggested in our prior newsletters “That This Time Is Different.” The contraction in activity was due to the physical constraints on economic activity. And so the recession ends just as soon as those restrictions are lifted.

All 50 states are now opening in some manner. We see a resumption in retail sales, employment, and industrial production growth.

Capital markets, looking about 6 to 12 months ahead, have roared in anticipation of recovery – even if off low levels.

Still, markets outside the $Tn+ safety blanket (including MPL loans and bonds) remain dislocated. The real economy has real harm and carnage not visible in public equities.

From Risk On to Risk Off?

We believe the next set of questions credit and equity markets will shift to are:

We’ve been constructive on markets since our “Don’t Fight the Fed,” “This Time Is Different,” “Contrarian View on Consumer Credit,” and “Resolving the Asset Price Conundrum” analyses over the past several weeks.

We are at a point where no one really knows where we go from here. Our view is shifting to “expect more downside volatility ahead” as markets make sense of it all.

What to do as a Lender or Investor?

We believe vigilant monitoring and contingency planning is the best response to an uncertain future (e.g., have a “break the glass” plan as a lender, have a pre-approved investment committee plan to know what assets to buy if/when spreads blowout, etc.).

That argues for being flexible and responsive to market conditions, come what may.

The bedrock of vigilance is real-time data and analytics to help navigate the stormy seas. Reach out to see if we can play a role in this turbulent period ahead.

Fed Chair, Jerome Powell, had an interview with 60 Minutes. Below are some of the excerpts that we found helpful. 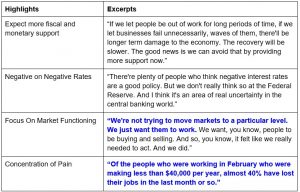 New customer segments (namely, the elderly population) are transacting digitally at a level never seen before the crisis.

On the retail front, Walmart and Target reported a dramatic increase in digital e-commerce transactions – 74% and 141% respectively.

In the earnings call, management noted an increase in not only new buyers, but also repeat rates across the board. Also, higher digital growth rates amongst customers who are 50 years of age or older.

COVID-19 has opened up a new segment of digital point-of-sale customers that would otherwise not have gone digital before.

Infrastructure players are benefitting as well. We saw in Jack Henry’s earnings (and Square and PayPal previously) that stimulus checks are increasing digital adoption.

Shopify noted that only a fraction of its brick-and-mortar users (~2%) were using some form of local delivery or buy online and pickup in-store service. By the end of April, that had risen to 26%.

Shopify Takes a Swipe at POS

Over the last few weeks, Shopify has made a definitive push to capture more payments and lending volume. Shopify issued a press release on a slew of new features and products.

It is a compelling offering that merges in-store and online sales. Key features include:

What does this mean for other POS lenders?

The big takeaway for “non-platform” POS lenders is that the winners in small business lending continue to be the channel players that have access to proprietary channels, unique data, and a  frictionless experience (e.g., Intuit, Amazon, Paypal, etc.).

The takeaway is that the majority – 70%  – of those in this survey who were approved for forbearance would have been able to pay their bills, but “wanted a break” from the normal pattern of making payments.

Here are the key findings from the survey:

For more on forbearance data, check out this WSJ article: “Millions of Americans Skip Credit-Card and Car Payments.” Highlights from TransUnion’s April data:

Here at PeerIQ, we’ve been tracking the rate of loans in hardship programs on our platform. The PeerIQ analytics platform is summarizing exposures. 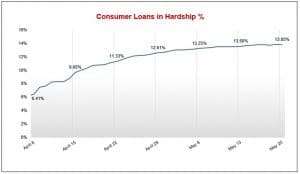 Looking at U.S. consumer loans specifically, after a spike in early April, loans enrolled in hardship programs continue to stabilize around 14%.

Brex, led by CEO, Henrique Dubugras, raised another $150MM in a Series C extension from existing investors and Lone Pine Capital. Dubugras hinted that the startup was preparing to go public.

It’s a timely move for Brex. Small business credit cards generally are drawn down in a recession. It can be hard for a non-bank to stomach as contingent liabilities are going up, just as access to wholesale funding is going down.

Whispers of the deal are in the $250MM range, with the deal set to close in the third quarter.

These fit into Goldman’s broader strategy to diversify its revenue mix towards retail banking and wealth management and the “spend, borrow, and save” paradigm.