This week, we cover the (1) latest unemployment data and our in-house forbearance analysis; (2) GreenSky’s earnings; (3) and moves by Square, Goldman Sachs, and Facebook in the consumer lending sector.

Unemployment data continued its slow-and-steady improvement, with new claims falling below the 1MM mark this week for the first time since March.

While a clear improvement, claims are still ~300k higher than the pre-pandemic record, and are nearly 4x the pre-recession level.

With unemployment levels staying stubbornly high, the team at fivethirtyeight.com released the latest poll of economist forecasts this week. Conducted in partnership with Chicago Booth, the survey shows that economists are deeply concerned about the follow-on economic impact if DC doesn’t renew the expanded unemployment benefits before September. 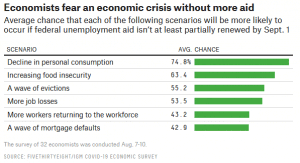 Top of the list – and most relevant to consumer credit – is a decline in personal consumption.

So far that hasn’t been a concern. In fact, retail sales in July were higher than pre-pandemic levels, posting their third consecutive monthly gain. But once stimulus support goes away retail supports can easily fall back again.

Interestingly, a wave of debt defaults is the least likely of the scenarios these economists identified. That’s in line with what we’ve seen so far: borrowers are taking their debts seriously and doing their best to stay current on loans. There is some evidence of “strategic hardship enrollment” – but not strategic default.

As readers of this newsletter know, each week we look at the loans in, or exiting, hardship programs to track how borrowers are holding up throughout COVID-19. We are continuously updating and refining our analyses, aiming to give our readers better insights into how borrowers are performing throughout this crisis.

For both June and July, the number and overall dollar volume of loans entering forbearance had fallen more than 85% from their April peak – a good sign that fewer borrowers are newly entering these programs as time goes on. 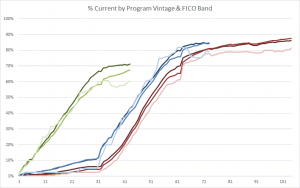 Looking at the borrowers who graduate from hardship programs to current, we see that there’s surprisingly little difference by FICO band. Instead, the pace of conversion is clearly determined by the program vintage; within vintages, there’s little difference among borrowers how fast they move to cure. 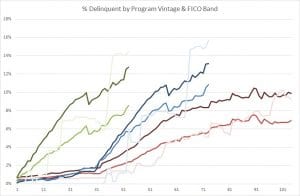 Delinquencies are another story. Here, we see much more differentiation between FICO bands and the speed at which program participants move into delinquency, with lower FICO borrowers falling behind much more quickly than their higher-FICO counterparts.

We would also note the surprisingly large share of above-800-FICO borrowers moving into delinquency; this appears to be an anomaly, given the very few above-800 borrowers involved in these programs (i.e., a high percentage off of a very very low base), but expect to dig further into this in future analyses.

Reach out to your client service representative at PeerIQ to learn more about this, and other, analyses available through our platform.

Following the release of results on Tuesday GSKY fell nearly (-23%); by the end of the week due largely to one-time shocks (provision build, deferrals, etc.). GSKY now trades at an $830MM market cap, with a 17.6x P/E and a 1.6x P/S

A few takeaways that we’d want to point out:

1) Net income fell two-thirds to $13MM, driven in part by higher CECL reserves ($10MM) and costs associated with their SPV. Management noted that no cash escrows were used, and in fact improving credit performance had a positive impact on net income (via incentive fees) 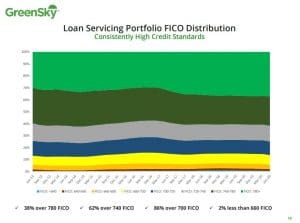 CAO Gerry Benjamin clarified on the earnings call that “even if we normalize those hardship deferrals…we come up with very, very satisfactory 30-day delinquency rate maybe in the near 100+ bps range,” while CEO David Zalik expressed confidence that the portfolio would “continue to be highly resilient”

Zalik further noted that a “disproportionately low percentage” of borrowers were in the income range to benefit from federal stimulus programs, so future program changes would be unlikely to directly impact credit performance

4) And the firm’s “strategic alternatives” review has officially closed, with the Board determining that organic growth is the best course of action

We’re looking forward to the firm’s first Investor Day to be held virtually later this year, where investors expect the unveiling of GSKY’s five-year strategy. 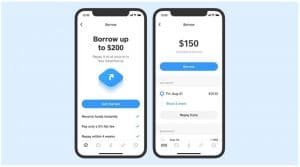 Square is adopting the “land and expand” approach: building an ecosystem of services designed to capture the customers spend, savings, and investing – including Crypto holdings. Cash App generated $875 million of bitcoin revenue and $17 million of bitcoin gross profit during the second quarter of 2020, up 600% and 711% year over year, respectively.

Square has begun testing a consumer lending tool within its CashApp for select users, the company announced this week.

While in testing mode, CashApp is offering small dollar short duration (4-week) loans. The loan sizes range from $20 to $200 and carry a 5% fee, plus 1.25% each week beyond four that the loan is unpaid.

Our view is that the product creates competition for high-rate payday and payroll advance companies while remaining “fair” for borrowers despite high implied APRs because of the small dollar balance.

This loan product is still in its testing stages and focused on near-prime borrowers. However, if Square manages to incorporate short-term lending into a tool used by 30MM monthly active users (and growing fast), it could start to move upstream and target prime borrowers over time.

GS Doubles Down on Co-Brand Cards: Where is the Pot of Gold?

The WSJ reported this week that Goldman Sachs and Barclays were bidding for the co-branded credit card business of General Motors.

This is the latest in a string of co-brand credit card deals that GS is fighting to win.

The jury is still out on whether Goldman’s co-brand card business is ROE-accretive. We would guess that it is not.

Acquisition bounties such as 50,000 bonus miles have hard costs in the hundreds of dollars. Customers are as loyal as the next free airline ticket.

It’s increasingly looking like the bet on Marcus has missed. GS has not grown consumer loan balances (flat at $2Bn YOY). The 3.5% Marcus ROA target is no longer a hero in investor presentations.

We have “strong views, weakly held”; let us know if you see it differently.

AmEx Has a Taste for Kabbage

Bloomberg reported this week that American Express was in advanced talks to acquire Kabbage, the commercial lender run by Rob Frohwein and Kathryn Petralia.

The all-cash offer was reported to be as high as $850MM – a significantly higher price point than competitor OnDeck’s recent $90MM sale, but still below the $1Bn+ price point Kabbage reached in 2017.

This week, Facebook announced the launch of Facebook Financial, a new unit led by David Marcus, to oversee the various payments projects across

Facebook. F2, as the new group is known, will consolidate WhatsApp’s payments efforts, Facebook Pay, and the nascent Libra cryptocurrency efforts all under the former PayPal leader.

There’s no question Facebook is looking to replicate or protect against the dramatic success of WhatsApp in enabling peer-to-peer payments in China.

…But Even Gen Z Prefers to Bank with Banks. Surprised?

Finally, we wanted to call your attention to a survey released this week by FinTech-focused hedge fund focusing on Gen Z’s financial services preferences.

The datapoint was what Gen Z doesn’t want: two thirds preferred to get their banking services from actual banks, rather than the Facebooks or Googles of the world.

In a world where the FAANGs keep getting bigger, there’s still a huge need for trust in financial services. Even the generation born with a phone in their hand feels the same.