This week, we look at the steady-and-slowing recovery in U.S. job markets, as unemployment claims fall and retail sales rise; the resiliency of the car loan market, surpassing initial pandemic-era expectations; and the red-hot investor demand for FinTech, with fundraising announcements from Chime, Klarna and Affirm.

This week, new unemployment claims fell slightly to 860,000, continuing the slow-and-steady decline in filings we’ve seen for weeks now. But while half of the jobs lost have now been replaced, we’re still in a nearly 11MM deficit from pre-pandemic, and at this rate, it will take a lot longer to get back to where we were.

Retail sales figures told a similar story: though sales increased 0.6% in August, that growth came in below expectations, as stimulus spending ends and the initial bounce from restaurant reopenings began to fade.

And while the data underscores the overall resiliency of the economy, that same economic recovery has taken some of the urgency out of D.C.’s new stimulus efforts. In fact, a recent survey estimates a less than 40% chance of new stimulus this year, versus 2021: 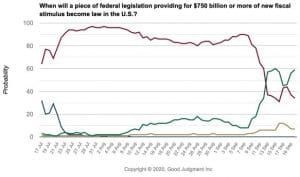 So far, stimulus has blunted the impact of recession. Many investors may not have noticed we are in a recession from a loan performance perspective, except for certain delays in payments related to hardship programs.

The takeaway for investors is that, absent stimulus, in January, the U.S. economy will experience an 8 to 10% unemployment level – not seen (and only fleetingly then) at the height of the Great Recession. Losses remain artificially low due to massive economic stimulus. Investors and lenders have a few months to position appropriately.

No Stop Lights for Car Loans, Yet

In another sign of resilience for the U.S. consumer, auto loans have managed to hold up even throughout the pandemic, reports the WSJ. In fact, earlier this week, Ally Financial announced that while 96% of the deferrals offered have ended, only 7% of the auto-loans using COVID-19 assistance programs have become 30 DPD or been charged off.

Performance has been strong enough, in fact, that Ally cut its full-year forecast for auto loan net losses to 1.3%, versus a prior range of 1.8% to 2.1%.

As readers know, here at PeerIQ, we’ve been keeping a close eye on consumer loan performance throughout the COVID-19 pandemic. With the experience of the auto loan market in mind, how do borrowers on our platform compare? 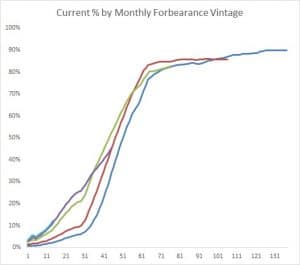 Looking across cohorts, we’re clearly settling into a steady pattern where more than 80% of loans that went through hardship programs return to current within sixty days of the program, while the share entering delinquency similarly steadies at rates of 12-14%.

That’s with one major caveat: as hardship programs implemented earlier in the pandemic wind down, the cohort sizes continue to shrink (by $ volume), with the July cohort only about 5% the size of April, and the August cohort less than 1.5% of April’s size.

Reach out to your client coverage team at PeerIQ to learn more about this and other analyses available on our platform.

As readers of this newsletter know, we’ve highlighted a few times the idea that in many cases, the pandemic has accelerated digital trends already underway, rather than completely changed things. We’d expect many of our readers to agree with that perspective, and this week, KeyBank’s CEO, Chris Gorman, became another convert.

Speaking at the Barclays Global Financial Services Conference, Gorman noted that COVID-19 had been a “step-change” in digital adoption, forcing the accelerated implementation of a digital strategy the firm had spent nearly a decade developing.

It was a strong week for FinTech financing, as three of the leading firms announced new fundraisings and stellar valuations, proving that investor appetite for FinTech remains strong.

When will we Hear an Opening Bell for Chime?

Challenger bank Chime, led by CEO, Chris Britt, announced a $485MM series F fundraise that cemented a $14.5Bn valuation for the firm. The round, which included leading investors Coatue, Tiger Global, and others, caps a meteoric rise for the firm, whose valuation has increased to nearly 10x the $1.5Bn it was pegged 18 months ago.

With this latest fundraise, Chime now has nearly $1Bn in dry powder to pursue growth, and should be well-capitalized to follow through on its plans to be IPO-ready in the next 12 months.

Swedish BNPL juggernaut, Klarna, led by founder and CEO, Sebastian Siemiatkowski, announced a $650MM round of fundraising that values the firm at more than $10.5Bn. The round, led by Silver Lake Partners and Singaporean sovereign wealth fund GIC, nearly doubles the valuation from Klarna’s previous raise and cements the firm’s lead as the highest-valued FinTech in Europe.

Finally, but certainly not least, congratulations to the team at Affirm, led by friend of the firm, Max Levchin, who this week announced a $500MM fundraise led by GIC and Durable Capital Partners. This comes on the heels of their partnership with Shopify, announced in July, and brings the total raised by the team to $1.3Bn.

Longstanding mortgage lender LoanDepot is also looking to join the party, sources told Bloomberg this week. The #2 non-bank mortgage lender, led by CEO, Anthony Hsieh, is back in the IPO conversation after pulling plans to go public in 2015. This time around, the firm is potentially looking at a $12Bn to $15Bn valuation, say sources.

LoanDepot hopes to ride in the wake of Quicken’s successful IPO.

This is a historic moment.

Together, these payments companies are more valuable than the largest banks (JPM, BoA, Wells, Citi, MS, and GS) in the land combined. The takeaway? Investors continue to clamor for capital-light payments companies exhibiting strong network effects.