Heading into the holiday weekend, and with it the end of the strangest summer in our memory.

We cover a few key developments this week: (1) the slow-but-steady improvement in labor markets as unemployment falls to 8.4% and jobless claims drop below the 1MM mark, (2) tremors (though not yet an earthquake) out of California as a new financial regulator is born, (3) shots fired by PayPal as they launch a new POS offering; (4) a debate over whether Rocket Mortgage is a tech company or lender.

On the macroeconomic front, the big news this week was the drop in the unemployment rate to 8.4%, a nearly 2% improvement over July. The 1.37MM increase in payrolls – including nearly 250k temporary Census workers, meaning the economy has now recovered about half of the jobs lost since the February peak.

The unemployment data followed a positive jobs report on Thursday, showing jobless claims falling below the 1MM threshold. Together, the reports provide yet more evidence of a recovering economy – albeit at a slow pace. 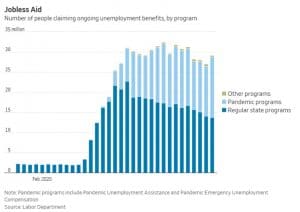 As the WSJ highlighted, unemployment benefits continue to provide a lifeline to nearly 30MM people; even though at the lower levels than before, these funds continue to be a necessary support to millions of Americans during the pandemic.

Inflation – a Mark of Success for the Fed? 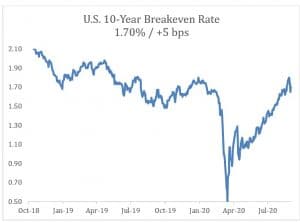 Sure, it’s a bit too early for the Fed to declare victory – and by the end of the week, breakevens had fallen back to 1.70%, but it’s yet one more sign of progress for the post-COVID-19 economy.

Each week, we’ve been taking a moment to check in on consumer loan borrowers, to see how their experience during the pandemic matches up against the broader macroeconomic environment.

With the latest positive news this week, we wanted to check: do we see evidence of better borrower health mirroring the broader economy? 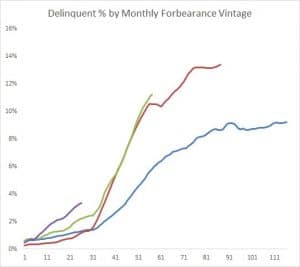 As in past weeks, we continue to see borrowers that entered forbearance programs later in the pandemic moving to current or delinquent status much faster than their earlier peers.

Furthermore, it is a bit concerning that the June cohort is starting to fall behind May’s “current” levels, while breaking away in terms of delinquencies…something we’ll be watching closely in the weeks ahead.

Want to conduct similar analyses on your own loan portfolio? Please reach out to your PeerIQ client service contact to learn more.

A Reassertion of State Oversight?

On the regulatory front, this week California lawmakers reached broad agreement on establishing a new state agency to oversee financial services. Dubbed the “Department of Financial Protection and Innovation,” the new agency is expected to replace the existing Department of Business Oversight and will have expanded supervisory powers over debt collectors and other service providers.

Richard Cordray, an advocate for the legislation and the former director of the CFPB, noted that this “could be the most powerful year ever for consumer financial protections in California.”

As readers know, after the recent game-changing settlement in Colorado, which established important clarity on how FinTechs and banks could support consumer access to necessary financial services, while staying compliant with state regulations – we observed that we might be entering into a new phase of states trying to reassert their regulatory oversight of financial services, potentially in direct conflict with long-established deference to OCC and FDIC rules.

California’s action this week may not quite be at that level, but it does underscore the importance of keeping a very close eye on state-level regulatory activity in the coming months.

PayPal Aims at Affirm and Afterpay

Big news on the industry front, as Forbes reports on PayPal’s launch of its own POS solution, marking the latest entry into a market with millions of U.S. customers.

Named “Pay in 4,” the service allows customers to split purchases of up to $600 into four installments over a six week period.

Potentially posing a direct challenge to the incumbents, the new service will not charge an incremental fee to retailers (PayPal already books a 2.9% charge to merchants using its service) nor interest to consumers, only tacking on a late fee of up to $10. Unlike their existing PayPal credit service – more akin to traditional lending, and funded by its relationship with Synchrony – the new Pay in 4 loans will stay on PayPal’s balance sheet.