Lots to cover this week. We touch on the (1)  latest American unemployment data and a record monthly jump (25%) in existing home sales; (2) we recap 2nd quarter earnings; (3) we review a big industry result – the settlement of “true lender” litigation in Colorado.

New unemployment filings inched back above the 1MM mark this week, underlining the slow pace of recovery in American labor markets. And yet, although slowly, job markets are steadily recovering – the 14.8MM people collecting unemployment benefits was the lowest number since April.

The fits-and-starts recovery of the American economy puts even more pressure on the Federal Reserve to continue its support. As Bloomberg highlights this week, that support is expected to continue for a long time to come. Federal Reserve Chair, Jay Powell, has been overseeing a review of the Fed’s inflation strategy, and there are strong indications that the Fed will break from history to allow (if not outright encourage) inflation above 2% in the months ahead.

Those low rates are having an impact – not least on the housing market, which saw an unprecedented 24.7% jump in the number of existing home sales in July. The monthly increase was the largest on record (going back to 1968) and brought home sales to a pace not seen since December 2006.

…Even as Gov’t Spending Peters Out

Evercore released an updated version of their disbursement chart, showing the continued fall-off in government support as the COVID-19 pandemic continues (now down to ~$10Bn per week).

Huge news out of Colorado this week, as the AG’s office announced a comprehensive settlement with non-bank lenders Avant and Marlette, as well as their bank partners in a pair of lawsuits that had challenged established practice on “true lender” regulation.

Under the terms of the settlement, the non-bank lenders have agreed to maintain lending licenses in Colorado in order to provide loans to in-state residents, while the banks have agreed to follow certain safe harbor procedures to ensure loans are captured under the “valid when made” doctrine applicable across the country.

Friend-of-the-firm Gilles Gade, CEO of Cross River, emphasized that “This agreement serves to confirm the validity of the consumer lending model Cross River has been utilizing since inception,” underlining the importance of regulatory clarity to allow “responsible innovation [that] creates safe borrowing opportunities for consumers otherwise left behind.”

Here are some takeaways:

We recommend looking at the excellent Chapman and Cutler LLP summary for more details.

Who are the winners? This is a voluntary settlement so there’s something for everyone:

Other states and federal regulators in a Biden administration might look at the CO settlement as a template. If it’s possible that the CO settlement “goes federal” then partner banks with the largest balance sheet and distribution capabilities would stand to benefit.

That would make Cross River stand-out as the biggest winner. Cross River has the most balance sheet capacity across the partner bank landscape, a capital markets capability, and a proven ability to lean in and fund partner loans when capital markets breakdown.

…but Regulatory Uncertainty Moves to Other States

American Banker reports that a number of state AGs have filed suit against the FDIC, alleging that the recent final rule clarifying “true lender” in transactions across state lines violated proper procedures and should be stopped. The states – California, Illinois, Massachusetts, Minnesota, New Jersey, New York, and North Carolina, joined by Washington D.C. – are following the path of a suit launched against the OCC last month, which similarly looks to unwind clarifications of “true lender” transactions.

That’s a Wrap for 2Q Earnings

We’ve now come to a close on the 2Q 2020 earnings season, and as with past quarters, we wanted to share our takeaways from these past few weeks.

Couple key themes jump out to us during this quarter’s release: 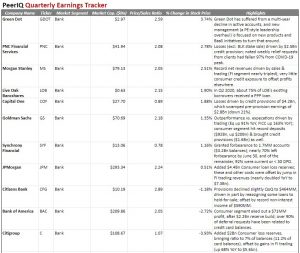 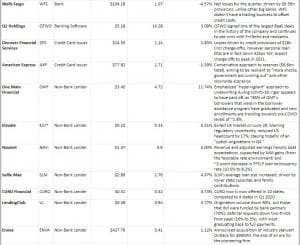 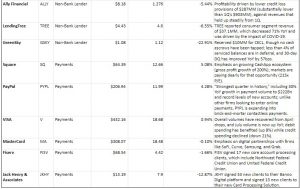 As with everything else in the post-COVID-19 world, none of the themes should surprise readers – we’ve been talking about these ideas for months, if not years! – but COVID-19 has accelerated the moves that we knew were coming. Or as PayPal CEO Dan Schulman put it (here focusing on e-commerce), the shift has “outpaced prior external forecasts by an astonishing 3 to 5 years.”

AmEx Develops a Taste for Kabbage, and Other Industry News

On the industry and product front, American Express announced that it would acquire small business lender Kabbage for an undisclosed sum (though in prior weeks, the price was rumored to be “up to $850MM”). AmEx is getting the technology, people, and data of Kabbage – but not taking the loan book along.

It’s a comedown for Kabbage CEO Rob Frohwein & Kathryn Petrelia – the firm raised $250MM in 2017 from SoftBank at a valuation between $1.25Bn and $2Bn – but in the COVID-19 (and compared to ONDK) looks like a solid outcome all things considered. Congratulations Kabbage and AmEx!