This week, we discuss the stalling labor market recovery, with another week of 870,000 unemployment claims announced; touch on new regulations underway by the Fed and the OCC; and highlight Goldman’s continued push into digital small business lending with a new partnership with Walmart.

Continuing the theme of the past few weeks, new unemployment claims came in at 870,000, effectively flat to the prior week. Although the decline from the March peak of 7MM is positive, the ongoing economic impact of COVID-19 shows no sign of letting up anytime soon.

D.C. continues to drag its feet on passing new stimulus measures to counter that effect. As of writing, a new round of outreach between Congress and Treasury Secretary, Mnuchin, was underway, with the hope of passing legislation before lawmakers recess for the election.

Negotiators are still far apart, though, and expectations are low that a deal will be reached prior to November 3rd.

And without a deal, the potential hit to the economy will be massive: nearly 5% cut to fourth quarter GDP, says Bloomberg Economics. 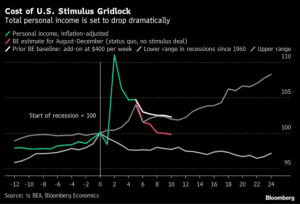 With prior rounds of benefits expired or slowly winding down, we take our weekly look at consumer loan borrowers. How are they performing as the 3rd quarter comes to a close? 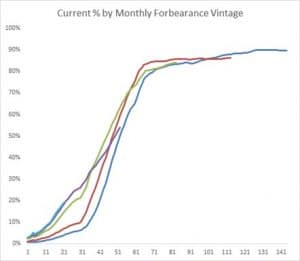 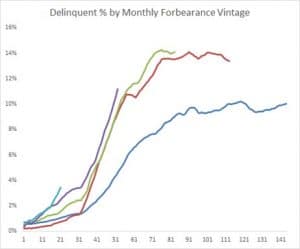 As in past weeks, we continue to see 80-90% of borrowers that took advantage of hardship programs return to current as they reach the 60-day mark, with many of the remaining borrowers entering delinquency (peaking at nearly 14%).

While it’s early days, one trend we are watching closely is the path followed by the July and August cohorts. Starting in July, borrowers began to take longer to return to current than April and May’s cohorts, even as delinquencies came at the same speed. August cohort borrowers appear to be following a similar path, albeit at much smaller aggregate levels (as we noted last week, less than 1.5% the size of the peak).

Admittedly, this is a smaller group, but the speed at which they move to delinquency is worth keeping an eye on.

Contact your PeerIQ client representative to learn more about running similar analysis on your own loan portfolios.

This week, the Federal Reserve voted to seek public comment on a potential overhaul of the rules governing the Community Reinvestment Act. The vote was in part meant to limit confusion among banks between Fed-driven regulation (covering 15% of activity under the CRA) and rules recently drafted by the Office of the Comptroller of the Currency (governing 70% of CRA loans).

The OCC was involved in another rulemaking debate this week, as a lawsuit from New York’s Department of Financial Services (DFS) continued to make its way through the courts. The suit seeks to stop the OCC’s FinTech charter, arguing that states should continue to be the primary authority overseeing FinTech activities.

Ally announced this week a partnership with installment lender, Sezzle. With this agreement, Sezzle customers can now access financing for purchases up to $40,000, and monthly fixed-rate installment loans of up to 60 months.

Ally will begin funding these loans in the first quarter of 2021.

Goldman Sachs continues to push deeper into the small business segment, partnering with Walmart to offer lines of credit to sellers on its marketplace. The agreement will allow approved Marketplace sellers to access up to $75,000 from GS’ Marcus arm, with plans to further expand that limit over time.

This agreement mirrors the arrangement recently struck between Goldman and Walmart rival, Amazon, and further cements Marcus as a lender to digital-first small businesses.

Petal, the FinTech disrupting traditional credit scoring, led by CEO, Jason Gross, announced a new funding round of $55MM. The Series C round, led by long-standing investor Valar Ventures, brings the firm to $100MM raised, and is expected to help Gross and his team reach hundreds of thousands of new customers over the next two years.

Financial literacy-focused FinTech, Greenlight Financial Technology, led by CEO, Timothy Sheehan, announced a $215MM Series C round this week, led by TTV Capital and Canapi Ventures, among others. The firm, which focuses on tools that help parents teach financial literacy to their children, is now valued at north of $1.2Bn.

“Greenlight’s rapid growth is a testament to the value they bring to millions of parents and kids every day. My wife and I trust Greenlight to give us the modern tools to teach our children how to manage money,” said Gardiner Garrard, founding partner at TTV Capital.

Congratulations to both firms!