Earnings season continued this week with reporting from card issuers that focus on mass-market credit products including Capital One, Synchrony Financial, and Discover.

We see a bifurcation in credit performance trends between mass affluent credit card issuers, and issuers focused on mass market credit segments. Synchrony, the largest store credit card issuer, shares dropped 16% on Friday due to a 45% increase in its loan loss provision. Capital One and Discover also increased their provision by 33% and 14% respectively. By contrast, the credit card master trusts of large card issuers (AXP, BAC, JPM) exhibit delinquencies that are near all-time lows (as analyzed in prior PeerIQ newsletter) due to their focus on higher credit quality relationship customers.

Also this week, after a series of objections to the OCC’s plans for a fintech charter, state regulators sued the federal agency claiming that it does not have statutory authority to create a special-purpose charter. At the same time, John Ryan of the Conference of Bank State Supervisors, an advocate for state regulators, acknowledged the need to “streamline regulation and automate licensing across state lines”–an acknowledgement of the significant regulatory burdens facing fintech firms.

On Friday, bond investors welcomed the first Avant ABS deal of the year. AVNT 2017-A was upsized to $247.8 Mn collateral and received significant interest from broader credit investors.

This week we explore AVNT 2017-A and highlight the key insights.

Avant priced its first unsecured subprime consumer deal of 2017 on April 26th (AVNT 2017-A), its fourth rated securitization. The transaction was upsized from $192.6 Mn to $218.9 Mn due to favorable investor demand. The deal was led by JP Morgan who also structured the transaction, as well as Credit Suisse and Morgan Stanley. Avant retained 5% of the deal, consistent with risk retention requirements of Dodd-Frank Act.

We note that credit enhancement provides note holders with protection against losses and delays in scheduled payments. Specifically, bond investors in AVNT 2017-A benefit from credit enhancement consisting of over-collateralization, subordination, reserve accounts, and excess spread. For AVNT 2017-A, the A, B, and C tranche has a total credit enhancement of 41.8%, 22.3%, and 13.2% respectively (Exhibit 1).

Avant’s business operating model allows for several important components that strengthen alignment of interests between Avant and institutional investors. According to Kroll Rating’s pre-sale report, as of March 31st Avant retained approximately $2.5 Bn (65%) of the $3.8 Bn in loans originated through the Avant Platform. For this transaction, Avant contributed 95% of the loans in the collateral pool.

Loans originated through the Avant Platform are originated by WebBank, a Utah chartered industrial bank insured by the FDIC. Avant performs servicing on all the loans it purchases from WebBank, including the loans that are sold to institutional investors. Therefore, it aligns its economic interest from servicing with the credit performance of loans originated from Avant platform.

Further, on the deal Closing Date, Avant or its majority-owned affiliate acquires and retains at least 5% of the fair value of total capital structure by Regulation Risk Retention. 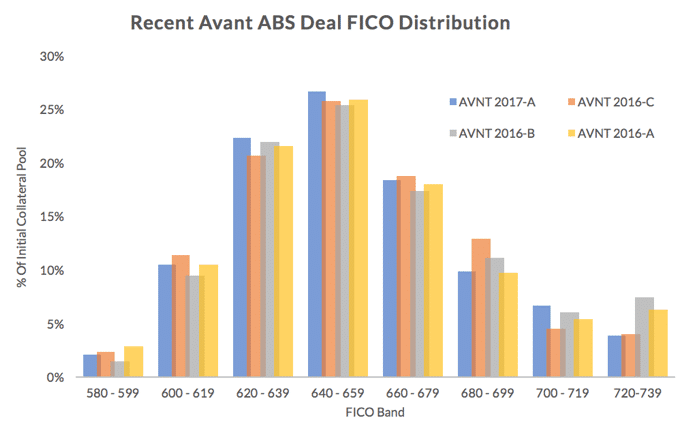 Due to the changes in underwriting standards, Kroll bifurcated the collateral pool into “run-off” and “representative” portions. The representative portion consists of loans originated under the current tighter credit quality standards.

Kroll increased the weighted average cumulative net loss (CNL) rate when rating AVNT 2017-A. For loans with 36 months or less terms, the CNL was increased from 13.86% in AVNT 2016-C to 18.39% in AVNT 2017-A (“Run-off Portion”). Further, Kroll assumed 16.55% for the representative portion in its pre-sale report, suggesting an upward shift in loss assumptions for AVNT loan product (Exhibit 3). 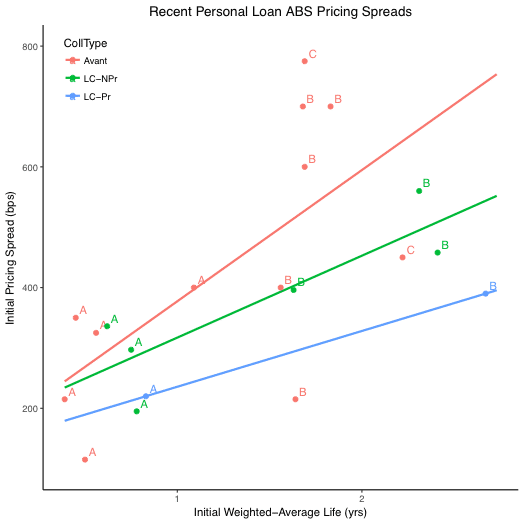 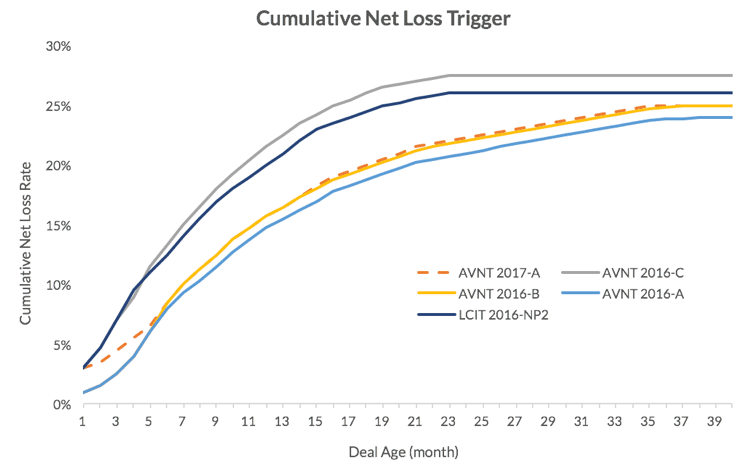 The exhibit conveys that trigger profiles can be very different even for similar collateral from the same shelf. AVNT 2017-A shows a much higher starting CNL profile (MOB=1) than AVNT 2016-B, starting at 1% and peaking at 25%. Although the changes in the underwriting standard is obvious, the loss trigger profile is slightly steeper, reflecting more up-front loss timing for AVNT 2017-A as compared to older deals, such as AVNT 2016-B.

In our prior newsletter and recent Securitization Tracker, we explored trigger definitions and highlighted the implications of a trigger breach from the investment perspective. Overall, the profile of the latest deal reflects a thoughtful approach and aims to minimize the probability of trigger breach.

One of the main challenges noted by Kroll in the performance analysis is the limited availability of asset performance data. To account for the data challenges, Kroll analyzed publicly available static pool as a proxy.  Rising heterogeneity and variation in deal structure and collateral types increase the analytical burden for issuers and investors alike. PeerIQ’s analytical tools offer both issuers and investors the ability to incorporate realistic loss and prepayment assumptions in their bond analysis.