The US Fed released their quarterly report covering “Quarterly Trends for Consolidated U.S. Banking Organizations”. The report shows that the ROE for the banking sector remains mired in the 7 to 9% range, below pre-crisis levels and the theoretical cost-of-capital for many banks.

We see an increase in M&A chatter. On the shareholder activism front, Marathon Partners called for change in several board seats at leading small business lender OnDeck.

We now have a growing number of publicly traded non-bank lenders and therefore access to public reporting data. In this newsletter, we demonstrate how non-banks are taking different approaches in trading off funding cost and liquidity—a key driver of competitive advantage and resilience during periods of market stress.

We compare side-by-side the funding models from a sample of publicly traded non-bank lenders, including Elevate, OnDeck, OneMain and Enova.

Lenders fund origination through credit facilities, securitizations, and their own balance-sheet. Now that multiple non-bank lenders have entered the public market, we have the opportunity to explore the anatomy of their funding mix using SEC filings.

We select several originators across asset classes and history in the capital markets to draw contrast between established originators and recent upstarts. The analysis includes OneMain (OMF), OnDeck Capital (ONDK), Enova (ENVA), and Elevate (ELVT). All of the businesses operate in markets where banks do not traditionally compete, and they share the goal of seeking low-cost, diversified, stable sources of funding.

We briefly introduce these lenders before we explore the analysis: 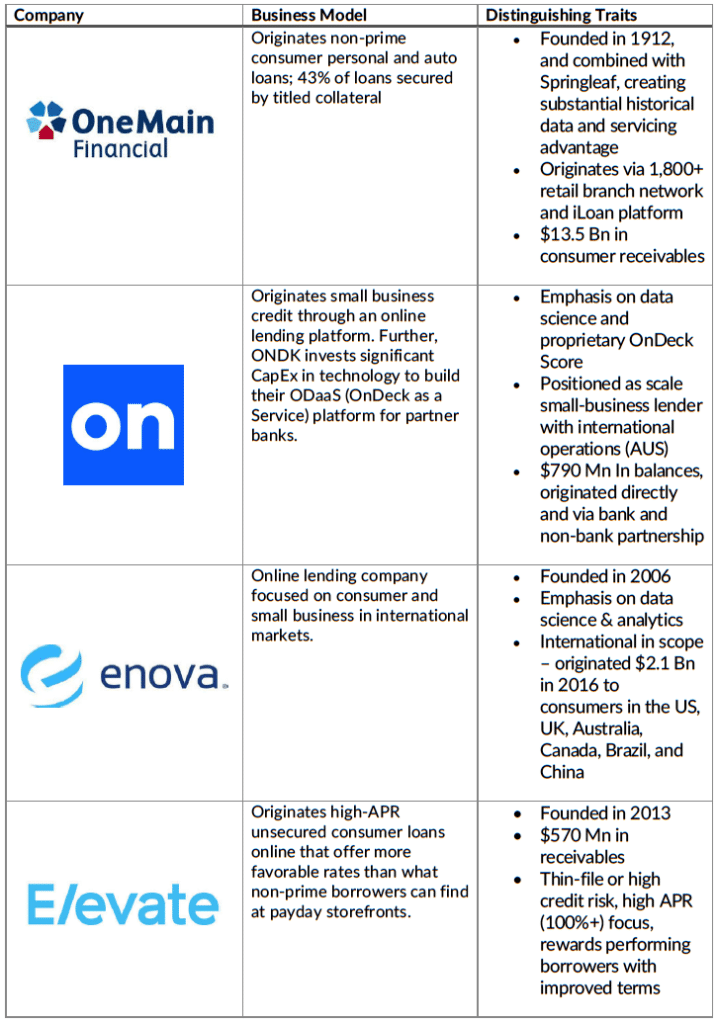 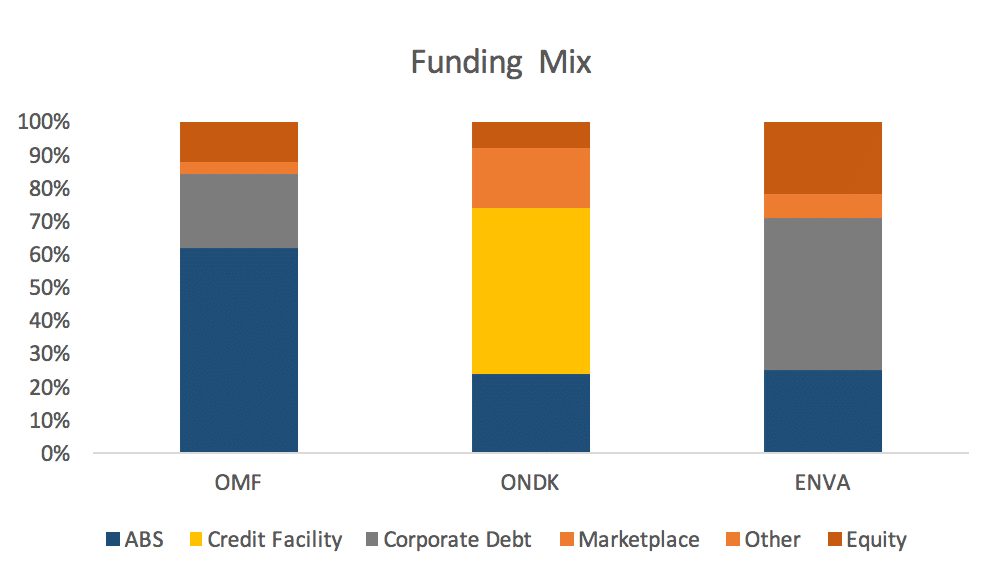 *Note we exclude ELVT from the above chart due to differences in financial reporting standards.

Exhibit 2 illustrates how these four lenders fund their receivables.

OneMain Funding Profile
We find that OneMain, the largest and most seasoned originator in the cohort, has the most diverse funding and multiple sources of liquidity.

OneMain taps the securitization market as a key pillar for funding both its consumer and auto lending businesses. OneMain completed twelve consumer loan securitizations under the Springleaf and OneMain shelves, and one auto securitization, totaling $8.3 Bn of secured structured financing note outstanding. OneMain has a well-established brand in the capital markets and the financing costs on term ABS programs are very low at ~3.5%

Although the funding mix might indicate that OneMain does not rely on warehouse finance, quite the opposite is true. OneMain also has eleven revolving conduit facilities with a maximum balance of $4.8 Bn in additional liquidity. The facilities represent a substantial liquidity backstop (from diverse counterparties with staggered maturities) should term ABS markets seize for a prolonged portion of time.

OneMain does not appear to be optimizing for a singular goal such as low-cost funding or maximizing ROE. All together, it appears that OneMain has implemented a financing strategy to deliver an attractive ROE (potentially high-teens or low twenties) while ensuring sufficient liquidity ballast to guard against disruptions in capital markets. For example, OneMain is also funding via $1 Bn of 8.25% senior notes issued in April last year rather than drawing on lower-cost liquidity available via warehouse finance. OneMain is willing to take on somewhat higher financing costs in exchange for access to diverse and longer-term funding sources.

OnDeck
OnDeck’s financing strategy varies significantly from OneMain. OnDeck is unique in the peer group from their utilization of whole loan marketplace sales. We note that the usage of this liquidity channel continues to decline over time as gains-on-sales from whole loans decrease, and as investors demand more ‘skin-in-the-game.’

OnDeck has the highest loan generation per unit of capital in the cohort. OnDeck is funding through the heavy usage of low-cost securitization and warehouse finance channels, and accordingly has the lowest funding cost in the peer group. However, we note OnDeck has more concentrated sources of funding channels that in turn rely on reliable execution and smooth functioning capital markets.

Elevate
Elevate, as a young online lender measured by receivables and inception, does not have any securitization programs to date and limited diversity in warehouse finance. Elevate’s primary source of financing consists of credit facilities provided by Victory Park Capital. Of the four platforms, Elevate has the least diversity in funding sources. The peer analysis suggests that diversification into securitization channels could potentially lower cost of funds for Elevate.

As observed in Exhibit 3, securitizations can partially replace secured and unsecured debt in the capital structure with more favorable non­recourse funding. The overall funding costs are positively impacted by the increased usage of securitizations and credit facilities, as the deals are executed at interest rates significantly below the coupon associated with the unsecured debt.

In our Q1 2017 Securitization Tracker, we noted that consumer credit delinquencies and charge-offs continued to increase during the first quarter across consumer credit verticals including personal, student, and auto loans.

As we enter the mature phase of the credit cycle, we believe originators are well served to take a balanced and analytical approach to financing, using tools such as those offered by PeerIQ, to execute business goals while protecting against adverse credit scenarios.

Issuers that that take the long-view and develop a competitive advantage in financing & liquidity stand to slingshot past their competitors when the cycle turns.