The marketplace lending ecosystem experienced seminal developments this past week.On the regulatory front, the OCC introduced a framework for granting national bank charters to FinTech lenders. In the ABS market, the first rated securitization of loans (Lending Club’s LCIT-NP2) consisting of Madden & Midland loans priced successfully. A strategic partnership between PeerIQ and TransUnion was unveiled to drive standardization, transparency, and liquidity for our industry.Special Purpose National Bank Charter for FinTechThomas Curry, head of the Office of the Comptroller of the Currency (OCC), announced Fridaythat the agency would grant national bank charters to qualifying FinTech firms. Curry cited “public interest”, a “patchwork of supervision”, and the “great potential to expand financial inclusion” as motivations for the charter.Special-purpose charters will be granted to firms that engage in one of three banking functions: lending, receiving deposits, or paying checks (e.g. issuing debit cards or enabling payments).The proposed charter offers federal pre-emption of conflicting state laws. Under the charter, non-banks must comply with laws applicable to other national banks (BSA, AML, OFAC, etc.), and continue to adhere to relevant consumer protection laws (e.g., FCRA, ECOA, TILA, etc.). Many of the largest FinTechs, particularly those that are service providers to banks, already comply with the foregoing today.However, under the charter, FinTechs will also be subject to qualitative and quantitative capital and liquidity requirements to ensure safety and soundness. The quantitative requirements are unspecified, although they will be at a level lower than banks accepting insured deposits.Access to liquidity and financing remains the most pressing challenge for non-banks more generally. The charter will not solve this, on the contrary, access to reliable liquidity and funding is a pre-condition for the charter. (FinTechs will not have access to government-insured deposits under the charter; instead they must apply to the FDIC for the privilege and, if granted, would be paired with capital requirements and incremental supervisory standards associated with traditional banks.)Charter requirements will require significant investment in governance, personnel, systems, and creating a top-down culture of compliance. The criteria that most FinTech firms will struggle with are the to-be-defined capital and liquidity rules. In determining the rules, the OCC is trading-off the goal of public confidence in national banks and the banking system generally, with the goal of expanding access to credit and encouraging innovation.Our speculation based on the qualitative criteria in the proposal and the “safety and soundness” standard is that FinTechs that have liquidity, funding, or going concern risks will struggle to obtain charters.The likely beneficiaries of the charter will be technology firms that can satisfy their liquidity needs from operations or sale of marketable securities (under various market conditions), and have credible access to the capital markets. Payments firms like Google, Apple, Paypal, and Amazon would fit the profile, as well as large non-bank lenders that have de-risked their business models.We note that the OCC is receiving comment letters through January 15th, 2017 we may change our view once explicit quantitative criteria on capital and liquidity requirements are disclosed in the final rules.Technology firms may also choose to avoid the charter to maintain a culture of growth and innovation. Partner funding banks such as Web Bank and Cross River will continue to play an important role for all but the largest non-bank lenders.PeerIQ summarizes below the baseline supervisory standards from the OCC’s “Exploring Special Purpose National Bank Charters for FinTech Companies”: 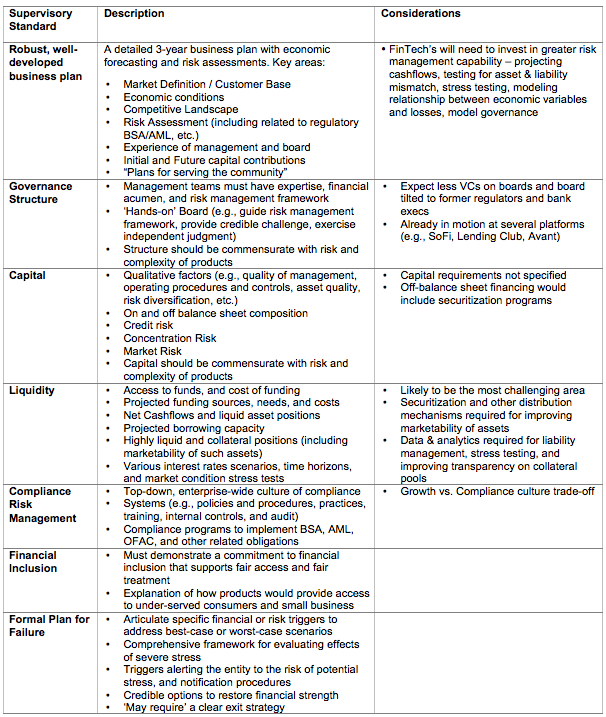 Lending Club Deal Analysis
This week marks the first rated securitization of LendingClub near-prime unsecured consumer loans. The transaction is notable in that it is the first rated deal consisting of Madden & Midland loans (~10% of loans from NY, CT, and VT) – a positive sign for market acceptance. The enforceability of these loans will be subject to subsequent court decisions in the second court regarding exportation of usury limits.

As we noted in our July 31’s newsletter, the appearance of a LendingClub branded shelf, LendingClub Issuance Trust (LCIT), suggests a broader trend of tapping into the ABS markets and a pattern of repeat issuance among MPL originators.

We have seen three LendingClub Near-Prime securitizations this year; they are LCIT 2016-1, LCIT 2016-2, and MHMT 2016-LC1. The loans in these deals are originated under the LendingClub Near Prime Custom Program, which consists of loans that do not satisfy the Standard Program credit policy and are only available to qualified institutional investors. The Near-Prime (NP) loans have lower average balance and shorter duration than loans in the Standard Program.

LCIT 2016-NP2 is sponsored by Jefferies and backed by about $131 million of LendingClub (LC) near-prime loans (Exhibit 1). Kroll pre-sale report indicates that the average credit score of the collateral pool is about 640.

The size of pool balance for both LCIT deals are comparable, around $130 million. However, Murray Hill Marketplace Trust (MHMT) 2016-LC1, an unrated transaction led by Morgan Stanley, is collateralized by approximately $314 million of Near-Prime unsecured consumer loans.  Further, LCIT 2016-NP2 has a 2 month weighted-average loan age (WALA) and a 27.25% weighted-average coupon (WAC), in contrast to MHMT 2016-LC1, which had 9 months and 26.5% respectively. Both LCIT 2016 deals have comparable average loan balance around $8,000; MHMT 2016-LC1 has around $6,500 average loan size. In general, the two LCIT deals have the similar collateral characteristics, as expected from the same shelf.

MPL ABS bonds are typically structured with significant credit support, in the form of over-collateralization, reserve accounts, and excess spread, offering bondholders protections against potential losses in the collateral pool. The deal structuring depends on the collateral characteristics.  For instance, LCIT 2016-NP1 and 2016-NP2 deals have identical weighted average remaining term, which leads to similar tranching. However, the more seasoned nature of Murray Hill collateral leads to shorter weighted-average life (WAL) across its capital structure. The MHMT 2016-LC1 subordinate tranche has a 1.6 year WAL versus a 2.4 year WAL for LCIT 2016-NP2. The large collateral size of the MHMT allows Morgan Stanley to further tranche the collateral pool into a C tranche, subordinated by 10% of the collateral pool, with a 2-year weighted average life.

The three LendingClub Near-Prime securitization priced have the identical initial credit enhancement for A and B tranches, 35.5% and 23%, respectively (Exhibit 2).  Moreover, LCIT deals have a target overcollateralization (O/C) of 40% with a floor of 7%. Due to the additional C tranche in MHMT deal, the initial O/C was about 10% rather than 22.5% as in LCIT 2016-NP2.

The A-tranche holder should expect credit enhancement to improve significantly beyond 35.5% level a year from today. The accelerated deleveraging on A-tranche provides significant credit loss protection for the bondholder. B-tranche holder benefits from excess spread as well as over-collateralization. 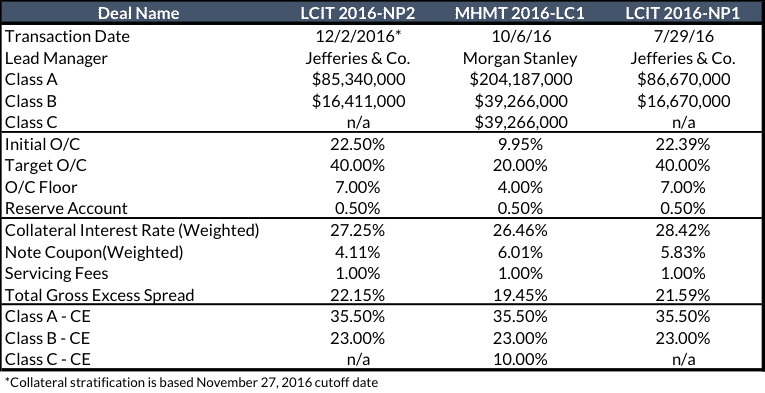 LCIT 2016-NP2 was priced at 3.0% yield and 6.0% yield for A and B tranches, respectively. The pricing for LCIT 2016-NP2 A was 120 basis points tighter than MHMT 2016-LC1 A with the same credit support, yet, longer WAL; it is also 75 basis points tighter than LCIT 2016-NP1 A. Given the collateral pool of the LCIT deals are similar and tranches have the identical credit enhancement, the expected loss of each tranche should also be comparable. Exhibit 3 displays the pricing of A and B tranches against tranche weighted-average life. The arrows point to LCIT 2016-NP2 deal pricing. As the weighted-average life of the bonds increase, the credit risk premium increases, as indicated by the dotted trend line. The tighter pricing of LCIT 2016-NP2 cannot be explained by tranche average-life.

Could the improved credit market condition explain the favorable pricing in LCIT 2016-NP2? SoFi recently priced SCLP 2016-3 A tranche at 200 basis points over benchmark rates on October 6th; and the SCLP 2016-2 A tranche was priced around 215 basis points over benchmark rates on July 26th, only 15 basis points wider. The dramatic improvement in LCIT 2016-NP2 pricing cannot be rationalized by the marginal spread tightening in the credit market since end of July to December. 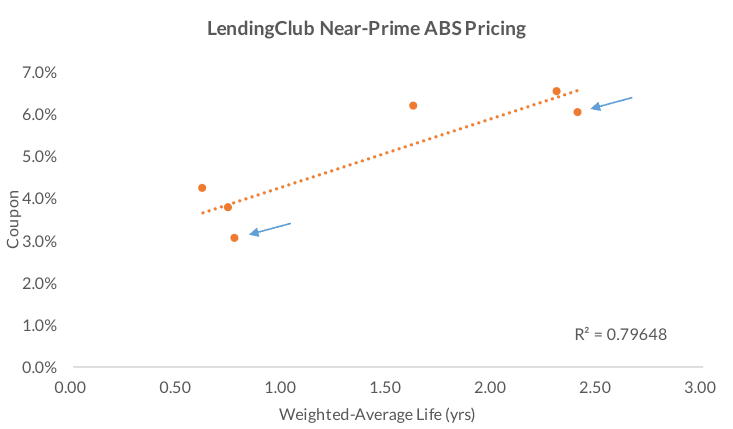 Due to the tightening pricing of A and B tranches, LCIT 2016-NP2 excess spread is 22.15%, a 55 basis points improvement than that of LCIT 2016-NP1, and about 270 basis points better than that of MHMT 2016-LC1 (Exhibit 3). The LCIT 2016-NP2 residual holders sit in first-loss position with economics that tie directly to uncertain prepay and default expectations. They benefit from significantly higher yield in return for bearing this risk.

The emergence of rated securities from LCIT shelf supports our belief that the rating agencies are more comfortable in rating this nascent industry with more historical performance data and issuers are more inclined to get their deals rated to expand their investor base.