This past Wednesday, Rick Smith, former Equifax CEO, appeared before the Senate Banking Committee. Equifax’s stock price rose several points despite severe questioning. Investors are concluding from the appearance that Equifax’s core business will remain intact although there may be severe penalties and privacy regulation in store. In prepared remarks, Smith suggested policy makers consider the creation of a public-private partnership to replace the SSN as the touchstone for identity verification.

In regulatory news this week, Federal Reserve Chairwoman Janet Yellen delivered remarks at the Community Banking Research and Policy Conference. Yellen remarked that the Fed is open to reducing regulatory burdens on smaller banks. The deregulatory tone comes at a time when the Trump Administration is expected to announce the next nominee for the Federal Reserve within weeks.

Also on the regulatory front, as we explored in our newsletter last week, under an interpretation of the proposed FinTech charter, commercial firms such as Walmart, Amazon, Google, and Facebook would have a path to offering banking services. We recommend Lisa Abramowicz’s reporting “Amazon Could be Your Lender” (Bloomberg) to learn more.

In M&A news, Navient announced it would acquire Earnest for $155 Mn in cash. Earnest previously raised at a $375 Mn valuation in 2015 during the peak in VC interest in online lending. The acquisition, which is expected to close in Q4 2017, marks the entry of Navient into the private student loan refi market where it will compete with the likes of SoFi, CommonBond, College Ave, Laurel Road, Citizen’s Bank, Wells Fargo, and First Republic Bank.

In this week’s newsletter we dive into the Earnest acquisition and compare Navient to the leading originator in student loan refinance market – SoFi.

Navient’s Acquisition of Earnest
This past Wednesday, Navient announced it would acquire Earnest for $155 Mn in cash. Earnest provides student and personal loans to borrowers using technology and alternative data points such as bank savings and spending habits. This acquisition will allow Navient to begin originating student loans under the Earnest brand (as they were previously not allowed to make loans due to a non-compete with Sallie Mae). Navient CEO, Jack Remondi said “We’re looking to be the major player in the student loan refi space” according to the WSJ. According to Navient’s investor presentation, the deal is premised on combining Earnest’s digital origination technology with Navient’s 40+ years of data and analytics, capital markets, and industry operating expertise.

The timing of the non-compete expiration coincides closely with the February 2017 hiring of CFO Chris Lown. Previously, Chris served as co-head of Morgan Stanley’s Financial Technology group where he was highly regarded for his work on M&A and IPO transactions for growth-oriented data technology firms and clearinghouses including CME Group, ICE, and Lending Club. Shortly after Chris’s hiring in Q2 2017, Navient spent ~$7 Bn to purchase a legacy loan portfolio from JP Morgan. The hiring of a highly regarded M&A banker followed by two significant M&A transactions in as many quarters has repositioned Navient for growth.

Background on Navient
In April 2014, Navient spun out of Sallie Mae, splitting the business in two. Sallie Mae continued its consumer banking business as well as origination of private student loans. Navient continued with loan management, servicing, and asset recovery. After the split, Navient kept 99% of the legacy company’s FFELP loans and 83% of the legacy company’s private loans. As of Q2 2017, Navient owned and serviced $86 Bn FFELP loans and $24 Bn private loans; it also serviced $206 Bn loans on behalf of others. As part of its asset recovery business, Navient currently manages $20 Bn in charged off or defaulted assets. 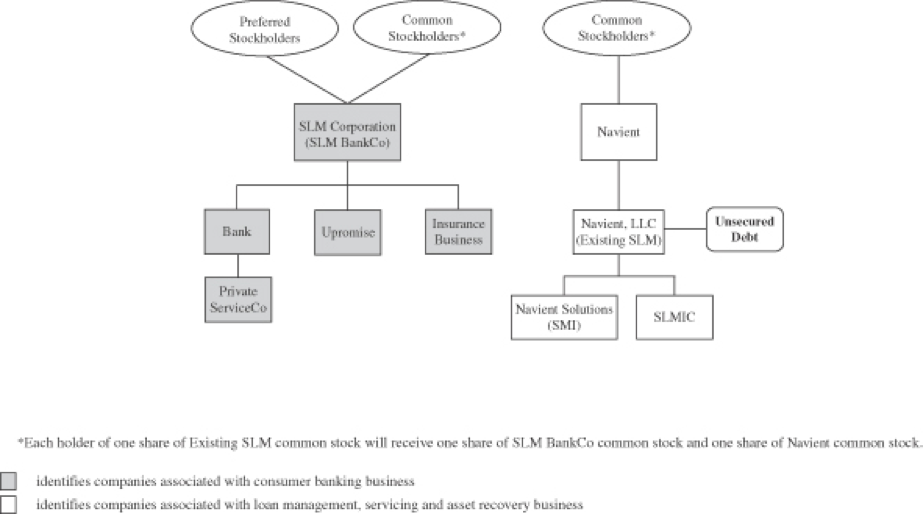 Under the terms of Navient’s reciprocal non-compete with Sallie Mae, Navient may not originate private loans to students for five years after the split. While the non-compete will come to an end in May 2019, the restrictions on any acquired company only extend three years, to May 2017. The ability to lend through an acquired company is likely a motivating factor for Navient’s acquisition of Earnest.  Navient’s acquisition of Earnest will allow the combined firm to pursue new lines of business as their legacy portfolio pays down.

How do Navient and SoFi compare?

First, we stress that Navient and SoFi are sharply different companies that have historically focused on different customer segments. Navient services a massive student lending portfolio sized at $200 Bn+ which reaches tens of millions of mass-market borrowers across the United States. Although the portfolio generates significant free cashflow the portfolio is in run-off mode pursuant to the terms of its separation from Sallie Mae.

SoFi is a young FinTech startup that recently raised $2 Bn in growth capital from Silver Lake and SoftBank. SoFi’s has focused on establishing and deepening relationships with a targeted customer segment (HENRYs). SoFi’s products are arrayed to meet the financial needs of its customers via lending, wealth management, insurance and potentially banking products.

Both firms are dealing with legal and management distractions. Navient is dealing various lawsuits from state Attorney Generals and the CFPB alleging deceptive lending techniques. SoFi is re-building its leadership team following the resignation of its CEO, CFO, and CTO.

Since only Navient is publicly traded, the ability to do a true comparable analysis is difficult. PeerIQ has attempted to build a picture based on publicly available resources. 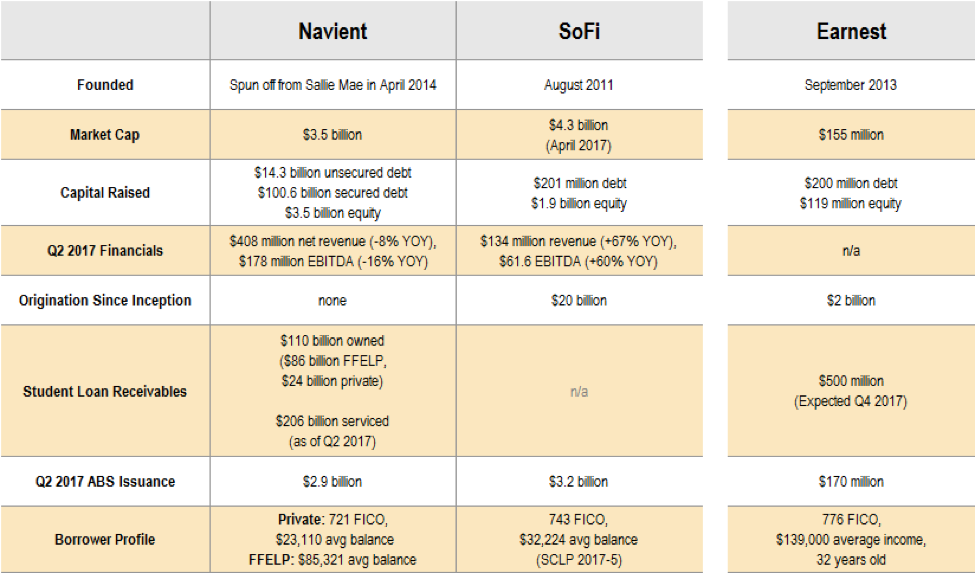 Navient services over $200 Bn+ in student loans and owns over $100 Bn+ in receivables. However, Navient’s portfolio is in run-off mode. Navient revenues continue to contract year-over-year. Consequently, Navient is publicly traded at 2.5x Q2 net revenue and priced like a value stock, while SoFi’s latest private valuation values the startup at 32x Q2 revenues like a growth stock.

Both firms are active issuers in the ABS markets, though Navient’s funding mix has a higher mix of unsecured and secured debt.  Also, the loan-level ROE on the Earnest origination immediately exceeds Navient’s cost-of-capital. SoFi sports a higher private valuation but lacks public equity currency to drive inorganic growth. Navient can fund M&A transactions that are non-dilutive to its shareholder base thru the sheer cash generating power of its legacy lending portfolio.

Overall, we believe Navient’s acquisition of Earnest is consistent with a new focus on growth and is part of a larger trend in traditional financial services firms marrying their resources nimble financial technology firms.