The US 3Q GDP growth was revised upwards to 3.3%. Actual GDP has exceeded potential GDP for the first time since Q4 ’17, making the probability of a December rate hike all but certain. Nominee for the Fed Chair Jerome Powell spoke before the Senate Banking Committee. Powell indicated that he plans to stay the course of raising rates set by Yellen in coming years. Powell shared surprisingly dovish comments pointing to weak wage growth and declining labor force participation as evidence of slack.

In regulatory news, Mick Mulvaney started his first day at the CFPB with a bag of donuts and a lawsuit on his hands. Following Richard Cordray’s resignation, President Trump appointed OMB Director Mick Mulvaney as his replacement. The appointment ran contrary to Cordray’s designated acting deputy director and his former Chief of Staff,  Leandra English. Ms. English filed a lawsuit and restraining order claiming her right to the position which was denied by a federal judge days later.  Mick Mulvaney has been a vocal critic of the CFPB and has claimed the bureau would look “dramatically different” under President Trump.

On Friday, Lending Club completed a first-of-its-kind transaction in marketplace lending by selling a whole loan pass through security. The transaction size was for $25 Mn and was sold to a single institutional investor. LendingClub held 5% to comply with risk retention rules. The transaction is notable for the following reasons:

Issuers and investors that would like to learn more about best practices in setting up a pass-through security program can reach out to PeerIQ.

Barclays has thrown its hat into the FinTech ring. Barclays announced it will originate unsecured personal loans online. The announcement follows the success of the Goldman Sachs’ Marcus which has originated $2 Bn this year. The announcement comes one month after Uber released its Visa card in partnership with Barclays. In March of this year, Barclays sold its $1.6 Bn subprime credit card portfolio to non-bank lender Credit Shop. In securitization news, we highlight some recent deals issued in the second half of November below.

As we approach the ten year anniversary of the financial crisis, we highlight below how investors and originators could have anticipated and positioned their portfolios correctly leading up to and after the Great Recession.

Mortgage Delinquencies and the 2008 Crisis

Following the integration of TransUnion’s deep datasets on the PeerIQ platform, we examine the historical delinquencies for mortgages over the last 15 years. As seen below, we find that Mortgage delinquencies increased meaningfully, across all credit scores, one-year before the financial crisis. “Mortgage delinquencies reached exceeded prior levels in mid-2016 while the S&P 500 continued to advance until October 2017. 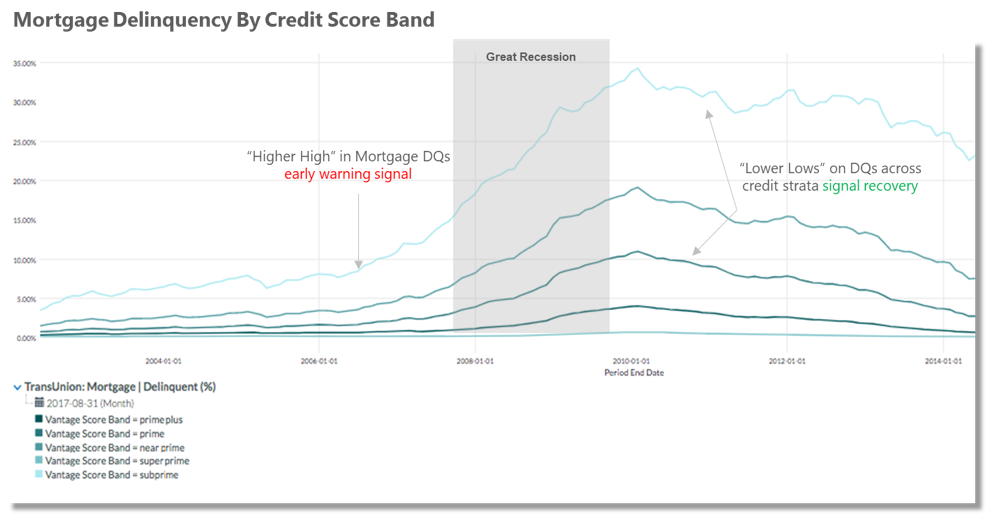 We also show that the rise in delinquency levels above corresponds to the rise in Debt-to-Income levels (and other underwriting statistics – not shown) leading up to the crisis.

The above are screenshots from the PeerIQ platform and show the power of creating transparency and competitive advantage in a dynamic lending market. Where do delinquencies stand in the personal loan market? Where should ABS investors position their portfolios? How does pricing and underwriting on recent vintages compare to prior years?

Reach out to PeerIQ learn more about how the data & analytics can be applied to your portfolio.