It’s worth noting that central banks, including the ECB and PBOC, view promoting a healthy securitization market as an important transmission mechanism for monetary policy.

In an earlier speech, Draghi identified the securitization market as crucial to the transmission mechanism linking central bank policy to Eurozone lending. He’s not alone. Eurozone regulators including the Basel Committee, the European Banking Authority, the Bank of England, and the European Commission’s Capital Markets union have published a “plethora of papers” in their goal to revive ABS issuance.

China may be a step ahead of the Eurozone as it relates to policy success. PeerIQ gave a talk at last month’s Continuum Credit SF conference, highlighting the role of securitization for marketplace lenders and sharing the following analysis pairing policy changes with dramatic ABS growth in China: 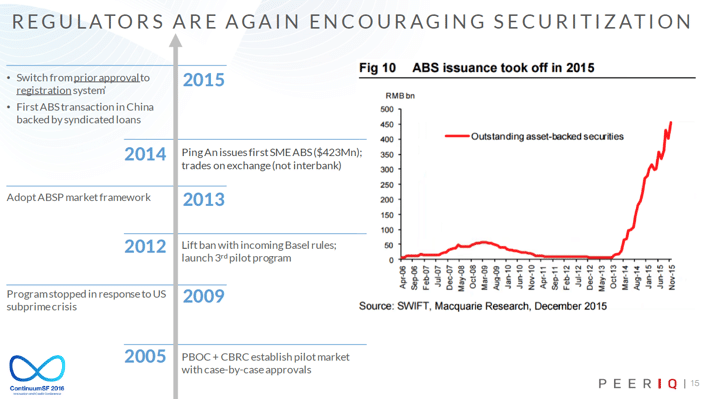 The regulatory urgency is driven by the impending Basel III phase-in. Regulators see a transparent and high quality ABS market as a channel for encouraging non-bank sources of lending, expanding credit to SMEs and non-bank institutions, and diversifying risk concentrations.

As for PeerIQ, we’re excited to play a small role on a problem that is global in scope and has direct impact on the real economy.