Much industry buzz centered on Moody’s notice of a potential downgrade on certain of Citi’s CHAI bonds, while upgrading the senior bonds on Blackrock’s CCOLT securitization.

The top-level question we are fielding is how do the CCOLT and CHAI deals compare?  We have to break that down to related sub-questions:

Are the CCOLT and CHAI collateral pools similar?

Yes, both pools consist of Prosper loans. The credit quality, composition, and geographic distribution is quite similar. CCOLT has a higher proportion of 3Y loans (which have lower CDR rates) and marginally higher FICO although these tilts are relatively minor. Here are the collateral statistics on both pools at deal origination:

How do delinquency rates compare across vintages?

We find that, for most cohorts, delinquencies have increased mildly in 2H 2015 as compared to the same period one year ago. [Specific numbers available to PeerIQ analytics subscribers.]

The rise in delinquency is uneven across grades. In particular, lower-FICO loans are experiencing a 2x or 3x higher sensitivity as compared to a smaller uptick in the super-prime cohort.

How do the deals compare?

Below we show the capital structure and initial ratings on both deals: 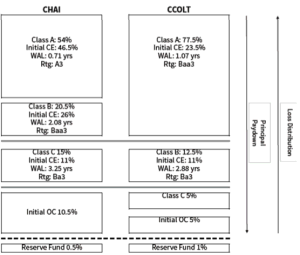 We note there are other differences in the deal – roles and responsibilities, covenants, and so forth that are outside the scope of our newsletter analysis and included in prior PeerIQ research.

So why the different ratings treatment?

Moody’s notes ‘a faster build-up of delinquencies and charge-offs than expected’ and has accordingly increased their cumulative loss expectation from 8% to 12% for CHAI.

We note that CCOLT is a Feb 2015 deal, whereas CHAI shelf spans 2H 2015 – we believe this explains the increased delinquencies for CHAI and the associated ratings action.  This is consistent with our observation of increased delinquencies in the 2H 2015 vintage (after controlling for loan and borrower attributes). CCOLT was a better vintage.

And finally, what does this mean for bondholders and the markets?

Naturally, the Class C tranche is the most vulnerable from increased losses. That said, we observe the deal has substantial credit enhancement in the form of overcollateralization (13 to 16%), excess spread (9 to 10%), and reserves (50 bps).

Brian Weinstein, Portfolio Manager at Blue Elephant, interprets the data as indicative of a turn in the credit cycle and has encouraged platforms to raise rates.  Others disagree. Prosper and other platforms have raised rates in anticipation of a possible slowdown.

Managing credit risk is a bit like driving with your rear-view mirror – platforms can price rates today but can only monitor performance after loans have seasoned some 6 to 18 months later.  Nevertheless, the relatively swift action we see in platforms re-pricing underscores a responsive data-driven approach that seeks to deliver consistent risk-adjusted returns through the cycle.

In the ABS market, we observe and expect to see increased trading as potential ratings actions lead to some re-pricing. We also observe re-tranching of certain deals with a tendency for increased credit enhancement.  We continue to see a broadening in the base of ABS investors, although the pace of deal activity is slower.

Taking a step back, we note that the level of delinquencies we observe is still at multi-decade lows according to Fed data. Combined with the short duration of the collateral, tranche thickness, low correlation, and wide spreads – the asset class will continue to find a welcome home on the asset allocation mix of ABS investors.