This week’s news centered around the presidential Inauguration. As one of the final acts of the Obama administration, the National Economic Council published a FinTech white paper highlighting principles for FinTech. The paper cited policy objectives including financial inclusion, transparency, and the need to increase efficiency in financial infrastructure.

In the ABS market, SoFi announced plans to expand its mortgage business and issued a $477 Mn unsecured consumer loan ABS. Also, industry buzz focused on an ABS 15-G filing from Mosaic suggesting an imminent securitization. Mosaic, a provider of affordable solar financing to homeowners, raised $220 Mn in a round this past August led by Warburg Pincus.

This week, we expand upon our summary of trigger breaches in the 4Q 2016 Securitization Tracker. We introduce the concept of triggers, analyze the consequences of breach in marketplace lending ABS deals, and highlight steps issuers and investors can take to manage these risks.

MPL ABS transactions are comprised of static pools with a pre-defined collateral pool and structural features designed to align the interests of noteholders with equity holders.

After closing, the collateral cashflow is allocated to noteholders and equityholders according to the cashflow waterfall logic in the offering documents. A Trustee will represent the interests of senior noteholders and monitor for compliance with covenants.

Triggers are a structural feature that provide senior bondholders with protection against a reduction in credit support. Triggers applying pre-defined tests (e.g., minimum excess spread, cumulative loss levels, delinquency rates, violations of reps & warranties, etc.) and may re-direct cashflows to senior noteholders if one or more tests are violated.

A trigger breach may force originators/sponsors to divert capital to repay noteholders rather than re-invest precious capital into revenue-generating origination activities. Such a “double whammy” is associated with headline risk, which can leader to reputation damage, and negatively impact future financing activities, either in a warehouse facility setting or during ABS transactions.

Noteholders may demand greater compensation or credit enhancement in future transactions. This reduces the economics for first-loss, residual investors which may be reluctant to co-fund residual interests alongside the sponsor of the securitization.

Over the last four months, we have observed a few trigger breaches in MPL ABS structures. Trigger breaches are a manifestation of unexpected credit performance, poor credit modeling, or unguarded structuring practice.

The negative headlines associated with trigger breaches increases the cost of capital for originators, and reduces the availability of funding.

CAN 2014-1A illustrates the potentially severe consequence of unexpected failing deal triggers. After two years of seasoning, CAN re-classified a portion of collateral loans that were represented as current, but should have been treated as delinquent in the CAN 2014-1A transaction. This led to a breach of the minimum excess spread trigger. The unexpected trigger prompted a $46 Mn balloon payment to senior bond holders. The payment created significant liquidity pressure on CAN Capital and forced suspension of origination activities. The trigger breach and data integrity issues together led to expulsion of C-level management, significant headcount reductions, and a review of strategic alternatives.

We note that the vast majority of extant MPL ABS deals have low probability of breaching, and that the CAN Capital case is also severe given the related data integrity issue.

Investors need to be aware of trigger breach implications from the investor perspective as well. Early amortization triggers have differing effects to investors across the capital structure.

MPL ABS transactions typically utilize tests based on both cumulative losses, current delinquencies, and cumulative deferments/forbearances triggers. The cumulative loss trigger threshold is usually defined as a percentage of the original balance of the deal. Once both tests are satisfied, the subordinate classes may receive their allocated share of principal repayments.

Delinquency Test Example: The outstanding principal balance of all loans delinquent 60+ days or more, including loans in foreclosure, real-estate owned (REO), or bankruptcy status as well as any loan modifications.

Early amortization triggers are effective only during the early part of the deal life, typically during the first 24 months, as a mechanism to protect senior noteholders. After breaching turbo triggers, the deal’s available cashflow will not be available for the equity holders until senior notes are repaid in full. The transaction enters into “full turbo amortization” where all available funds will be used to pay:

ii) interest on the senior notes,

iv) and pay principal on the senior notes.

Cumulative Net Loss (CNL) Rate Trigger Example: This prevalent trigger can be defined in a number of ways as issuers and originators work together in the deal structuring phase. Exhibit 2 illustrates a contrived trigger threshold profile. The trigger breach level is defined and increases with respect to the deal age. A trigger event occurs if the realized cumulative net loss rate exceeds the trigger threshold of the collateral. 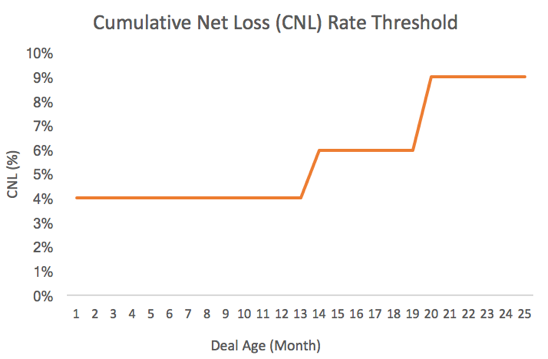 Trigger features are also specific to collateral type. In the case of student-loan refi ABS transactions, the deal will go into full turbo if any of the triggers below have been breached:

1) aggregate deferments and forbearances (as a percentage of the initial pool principal balance) exceed a predefined threshold,

A desire to improve execution combined with the growing number of deals that breach triggers in the MPL ABS space are leading marketplace lenders to take greater control of their ABS programs.

Sponsors and ABS investors are using sophisticated 3rd party analytics, such as those offered by PeerIQ, to independently model deal economics, monitor collateral and ABS programs on an on-going basis, and perform 3rd party data credit validation and verification to ensure representations and warranties are honored.