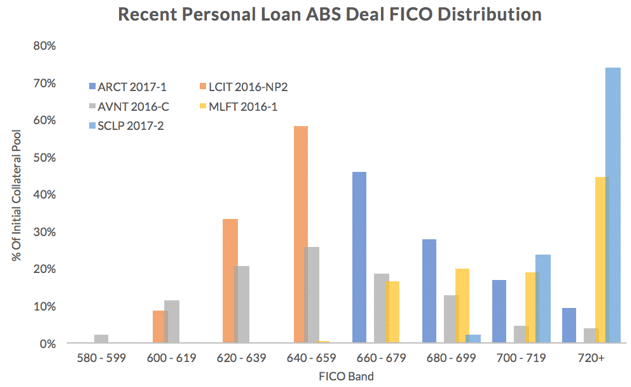 Last week LendIt USA convened in New York and had another year of record-setting attendance.

Several leaders from the FinTech scene delivered keynotes including:

We have analyzed all prior marketplace lending ABS deals from Lending Club Non-Prime loans in our prior newsletter pieces (LCIT 2016-NP1, LCIT 2016-NP2, and MHMT 2016-LC1). We have been eagerly anticipating ABS deals backed by the Prime program since last year. This week, Jefferies priced Arcadia Receivables Credit Trust 2017-1 (ARCT 2017-1), the first personal loan ABS deal collateralized by Lending Club Prime loans. It is backed by $220 Mn of prime loan collateral with an average seasoning of ten months.

Arcadia is the manager of Cirrix Capital, a marketplace lending dedicated fund. In ARCT 2017-1, Cirrix Finance, LLC is securitizing the loans purchased by Cirrix Capital from Lending Club. Jefferies and Amherst Pierpont are co-lead managers of the deal with a classic A/B tranche split (Exhibit 1).

As compared to the most recent near-prime deal LCIT 2016-NP2, the collateral in ARCT 2017-1 contains loans made to borrowers with a higher average loan balance (approximately $12k vs $8k) and significantly lower average borrower interest rate (15.27% vs 27.25%). The collateral pool is also eight months more seasoned than that of LCIT 2016-NP2.

The collateral pool in ARCT 2017-1 has been selected by Arcadia using their proprietary loan picking software, which has resulted in Arcadia’s managed pools having losses 10% lower than Lending Club’s prime program collateral of the same risk grades. However, for the purpose of rating the transaction, Kroll has remained conservative in developing its base case loss assumptions and loss multiples. It has assigned a BBB rating to the A tranche, and a BB- rating to the B tranche, assuming a cumulative net loss (CNL) rate of 14.70% and 6% recovery rate during its rating process. By contrast, for the SCLP shelf, Kroll assumed a CNL rate of 7.8% and a recovery rate of 0%. Although both ARCT 2017-1 and SCLP deals are backed by loans from prime borrowers, they have different collateral credit characteristics.

Exhibit 2 shows the FICO distribution for five recent deals. The FICO distribution of ARCT 2017-1 is tilted towards 660-679, and LCIT 2016-NP2 towards 640-659 range, in tandem with ARCT 2017-1. However, SCLP 2017-2 is backed by predominately super-prime borrowers as over 70% of the borrowers have FICO greater than 720. The differences in credit quality of borrowers leads to significant differences in pricing. 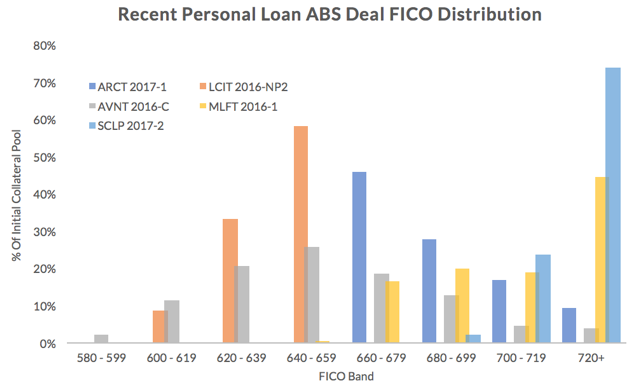 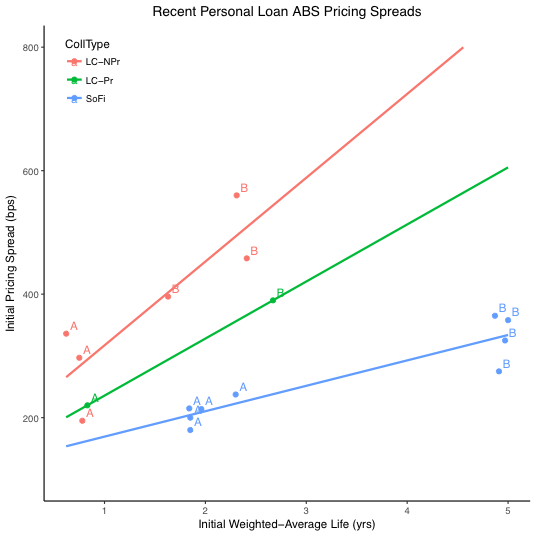 Besides credit supports, senior tranche investors have additional structural protection in the form of cumulative net loss rate trigger, which leads to accelerated repayment of principal in the event of worse-than expected collateral performance. (We illustrated the dynamics of trigger play in our earlier newsletter by applying simple hypothetical loss and prepayment assumptions.) Exhibit 4 shows several cumulative net loss (CNL) trigger profiles in recent personal loan ABS deals, which can be very different even for similar collateral. 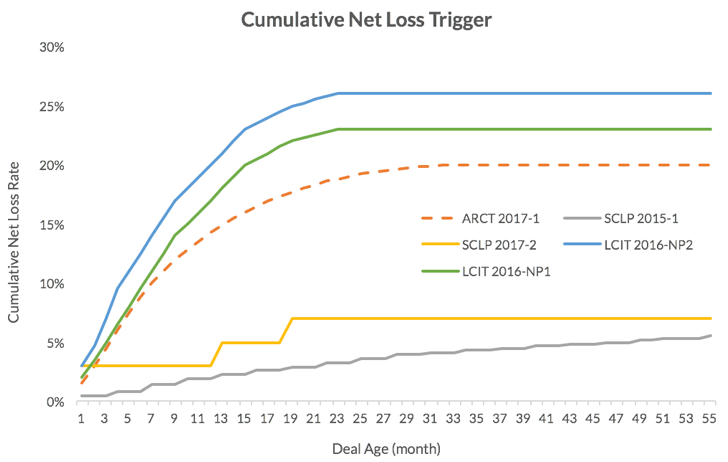 Also, the most recent SCLP deal SCLP 2017-2 shows a much higher CNL profile than SCLP 2015-1, starting at 3% and peaking at 7%, resembling a step function. The difference in loss triggers between SCLP 2015-1 and other personal loan deals is striking.

We believe robust data & analytics offerings and independent credit models, such as those offered by PeerIQ, will help both issuers and investors incorporate realistic 3rd party loss and prepayment estimates in deal structuring and analyses.