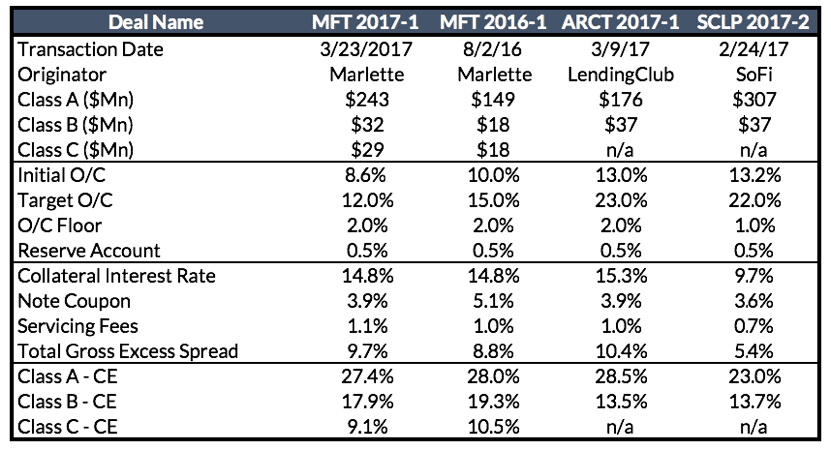 On the securitization front, SoFi 2017-B priced on March 22nd. The $461 Mn deal was rated by S&P, Moody’s, and DBRS, and led by Bank of American Merrill Lynch, Deutsche Bank and Goldman Sachs.

We are excited to see continued growth in non-bank lending outside installment loans. Fair Square Financial, founded by a strong team of Cap One and Bank of America executives, is launching a consumer credit card business under the brand name “Ollo” that seeks to tap into an underserved sector of the US Market. Credit card debts are structurally less risky than installment loans as credit card issuers can manage their credit exposure by dialing up or down borrowers’ credit limits. Additionally, credit cards likely appear higher on the consumer’s priority of payments than installment loans due to their convenience and other benefits.

Marlette has a strong capital market team led by ex-DB banker Karan Mehta and uses securitization as a funding channel. Citi Held for Asset Issuance 2016-MF1 (CHAI 2016-MF1), closed on March 4, 2016, was the first deal from the Marlette Platform which executed in challenging market conditions; Marlette Funding Trust 2016-1 (MFT 2016-1), closed on August 2, 2016, and was the second deal and first under the MFT shelf. MFT 2017-1, backed by $333 Mn of consumer loans, represents its third and the largest ABS transaction (Exhibit 1), led by Goldman Sachs, Deutsche Bank and Citigroup. Due to high demand, MFT 2017-1 was upsized by 18%, from $257 Mn to $304 Mn before pricing last Friday.

In a sign that regulatory uncertainty continues, the Marlette transaction did not include any loans from Colorado. Most recently, in February, Colorado state regulators filed a complaint against Marlette and demanded various remedial actions including refunding any excess charges to Colorado residents. Originators relying on the partner-funding bank model to impacted markets (such as NY, CT, VT) are structuring transactions to mitigate regulatory risk.

Seasoning is an important consideration for investors. The average conditional default rates (CDRs) typically peak in the first twelve months for consumer loan pool. MFT 2017-1 collateral pool has 11 months of seasoning compared to 3 months in SCLP 2017-1.

Investors in MFT 2017-1 further benefit from credit enhancement consisting of over-collateralization, subordination, reserve accounts, and excess spread. Credit enhancement provides note holders with protection against losses and delays in scheduled payments. For this deal, the A, B and C tranche have a total credit enhancement of 27.5%, 18.0% and 9.1%, respectively.

MFT 2017-1 is priced about 30 basis points tighter across the capital structure as compared to ARCT 2017-1, the most recent unsecured consumer loan ABS backed by LendingClub’s collateral pool. From a term structure perspective, Exhibit 2 shows flattening of the credit curve: the A tranche is priced 95 basis points tighter than the B tranche; and the B tranche 250 basis points tighter than the C tranche. This flattening behavior illustrates “risk-on” investor behavior as the search for yield intensifies. Compared to other Marlette deals, the credit curves have shifted downward and flattened. 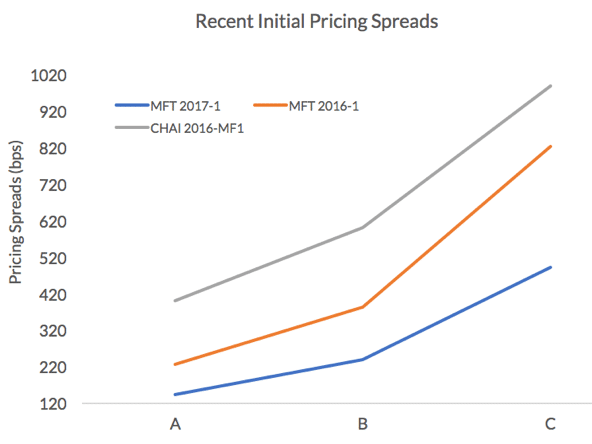 Unlike the smoothed curve function exhibit from ARCT 2017-1, the SoFi unsecured consumer loan deals typically have a “step function” like CNL profile, starting at 3% and peaking at 7%, resembling a step function. Marlette also applies the same approach as SoFi, albeit with different levels, from 4% to 14% after two of seasoning (4% for 6mo, 7% for 6mo, 10% for 6mo, 12% for 6mo, and peak at 14%).

Such CNL trigger profiles represent the first order approximation of loss timing curve. If the CNL triggers are set too tight, the triggers have elevated risk of being breached, leading to reputational hazard to the issuer; if too wide, the original bond rating may be challenged and the senior bond holders may not receive the structural protection they expected. 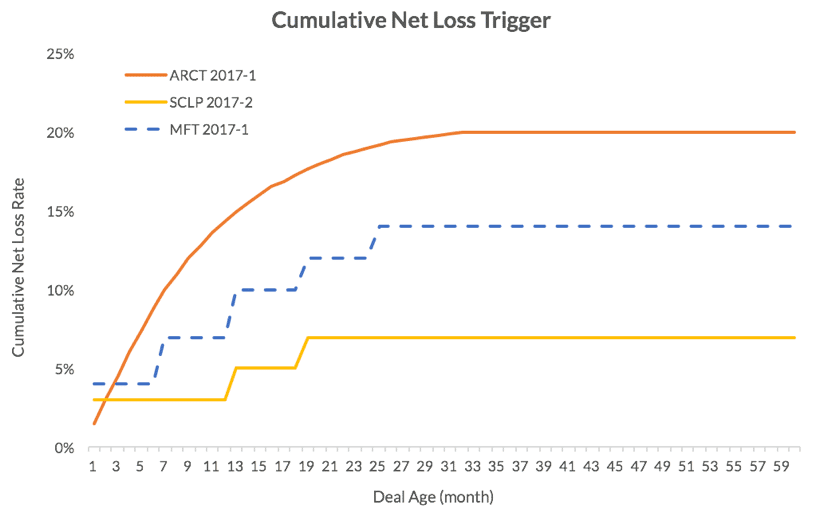 Last summer, PeerIQ predicted the rise of multi-seller deals as issuers seek to create a reliable path to liquidity for whole loan investors, drive standardization, and reduce execution costs and risks. The most recent Marlette transaction is notable in that 7 loan sellers vended loans into the deal. Affiliates of Goldman Sachs and partner funding bank Cross River Bank contributed loans comprising 45% of the transaction.

In the wake of increased uncertainty in loss and prepay timing, issuers and investors alike are increasingly incorporating third party data and analytics, including tools offered by PeerIQ, to drive decision making and improve investor confidence.

We continue to believe that the market participants that apply a robust analytical approach to model cashflows, economics and optimize deal structures will improve outcomes for all parties involved.