Last Thursday, PeerIQ CEO Ram Ahluwalia spoke at Bloomberg BNA’s Marketplace Lending: Regulatory Perspectives from Washington and Industry, where he discussed securitization as a key cornerstone of marketplace lenders’ funding strategy and projected that it will continue to grow. Indeed, the first week of Q4 was marked by an impressive active new issuance market for MPL ABS.  We have seen approximately $800 million in new issuance priced this week and an additional $168 million in pre-marketing.

In this week’s newsletter, we summarize the two deals priced this week, MHMT 2016-LC1 and SCLP 2016-3, and highlight key observations and insights from our Q3 2016 Marketplace Lending Securitization Tracker.

Over the past nine months, American Consumer Lending Holdings, a subsidiary of Prospect Capital, has been purchasing Lending Club (LC) Near-Prime loans with an intent to securitize.  With the market stabilizing, as evidenced by the favorable pricing of the SoFi and Marlette deals, Morgan Stanley, the sole lead, priced this transaction under the Bloomberg ticker MHMT 2016-LC1.

Murray Hill Marketplace Trust (MHMT) 2016-LC1, an unrated transaction, is collateralized by approximately $314 million of Near-Prime unsecured consumer loans.  This deal is significantly larger than Jefferies’ LCIT 2016-NP1, which is backed by about $135 million of LC Near-Prime collateral (for more, see our July Monthly Update).  MHMT 2016-LC1 has a 9 month weighted-average loan age (WALA) and a 26.5% weighted-average coupon (WAC), in contrast to LCIT 2016-NP1, which had 2 month and 28.5% respectively. The more seasoned nature of Murray Hill collateral leads to shorter weighted-average life (WAL) across its capital structure (Exhibit 1).  For instance, the MHMT 2016-LC1 subordinate tranche has a 1.6 year WAL versus a 2.3 year WAL for LCIT 2016-NP1. Still, MHMT 2016-LC1 A and B tranches have identical credit support levels to those of LCIT 2016-NP1. Further, a $39.3 million retained tranche C was created and sat on top of the 10% residual piece.

SoFi Consumer Loan Program (SCLP) 2016-3 is the largest unsecured consumer ABS since the inception of MPL ABS in 2013. JP Morgan, Citi, Deutsche Bank, and Goldman Sachs are the co-leads on the deal with SoFi as the co-manager. The deal was upsized during the initial pricing process—the A tranche was upsized to $452 million from $377 million, and the B tranche to $61 million from $51 million, implying $600 million SoFi collateral pool.

Kroll and DBRS are consistent in the ratings assigned to the tranches; the A tranche is rated single A; the B tranche has a BBB rating (Exhibit 2). The credit support associated with both tranches are also relatively consistent with prior deals.

Since the inauguration of SCLP shelf, the SoFi deals have priced tighter over time. Comparing SCLP 2016-3 to SCLP 2016-4 (the deal priced last month), the A tranche was 15 basis points tighter, and the B tranche was 30 basis points tighter (Exhibit 3).  We expect further tightening of the asset class as rating agencies grow more comfortable with the category and as investors reach for yield. 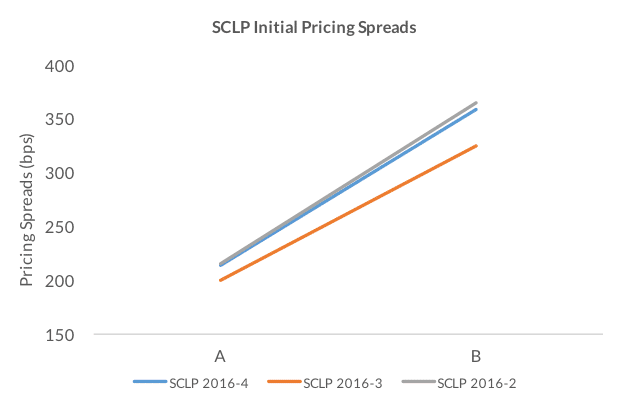 We have released our Marketplace Lending Securitization Tracker for Q3. We underscore several observations and insights below: