The CFPB ruling and Marcus platform dominated headlines this past week.

The CFPB was ruled unconstitutional by the United States Court of Appeals for the District of Columbia Circuit in a landmark decision on October 11th, but rejected the idea of shutting down the agency. The appellate court focused on its unusual independence in the Executive Branch, and the use of retroactive enforcement action against PHH Corp, a New Jersey mortgage-service company (PHH Corp. v. Consumer Financial Protection Bureau, 15-1177, U.S. Court of Appeals).

The court’s decision in favor of PHH Corp. was considered a setback to the CFPB, who just last month was recognized for its role in determining Wells Fargo’s $185 million fine for opening deposit and credit card accounts without clients’ knowledge.

Across the pond, marketplace lenders and platforms gathered in London at the LendIt Europe conference. Former FSA head, Lord Adair Turner softened his critical position on marketplace lenders and suggested there was “merit” to alternative lending which could “[make] credit crunches less likely” and lending is “likely to become a stable, significant and use part of our total credit system.”

The second highlight was “The State of the Industry in the USA” panel. Convictions were riding high with polar opposite views on the Marcus platform. PeerIQ CEO Ram Ahluwalia found himself in the minority position making the case that a “well capitalized bank with a deep understanding of consumer credit risk” should not be underestimated.

Coincidentally, Marcus launched two days later and we recommend a Fast Company in-depth report for those following the story.

It’s debate season. We encourage readers to grab a bowl of popcorn and watch the short debate on Marcus here (8 minutes).

This week we touch briefly on two topics – LendingClub’s recently released 8-K, and CommonBond’s CBSLT 2016-B.

LendingClub monitors macroeconomic, credit, and other market factors and attempts to achieve appropriate levels of loss-adjusted returns for investors and interest savings to borrowers by responsively revising underwriting and borrower rates.

Indeed, LendingClub has revised borrowing rates ten times since October 2014 (Exhibit 1) due to various reasons. For instance, while the December 2015 interest rate revision was in response to the Fed rate hike, other instances were due to increases in loss estimates, and increased investor demand for loss-adjusted returns. As seen in Exhibit 1, these revisions can lead to both increases and decreases in borrowers’ interest rates for given originator sub-grades.

In our Q3 Securitization Tracker, we noted the increased delinquency rates for 2015 and 2016 vintages and anticipation of additional interest rate revisions. On October 14, 2016, LendingClub interest rates increased by a weighted average of 23 bps based (Exhibit 2). Rate increases are concentrated in ‘F’ and ‘G’ grade loans. A-grade loans will experience an interest rate reduction.

The rate increases ranged from 27 to 71 basis points (bps), representing a 265 bps cumulative increase from December 2015 to October 2016.

According to the 8-K released on October 14th, 2016, LendingClub “will no longer approve loans for certain sub-segments of borrowers who meet a combination of several risk factors such as high revolving debt, multiple recently opened installment loans, and higher risk scores on our proprietary scorecard.”

We do note that the rate revisions due to credit performance suggest significant valuation impacts to Near Prime loan and ABS bond investors.

CommonBond is a student loan refinance online platform, targeting high credit quality undergraduate and graduate student loan borrowers. Since its inception in 2012, CommonBond has originated over $700 MM in loans through its lending partner The Bank of Lake Mills (BLM), a Wisconsin state-chartered and FDIC insured bank. BLM also back-stopped the reps and warranties CommonBond provided in the transaction.

Since the first deal under CBSLT shelf, CommonBond has established itself as a repeat issuer with a strong deal team, jointly led by Barclays and Goldman Sachs, and co-managed by Deutsche Bank. We expect that CommonBond will continue to issue two to four deals per year, and employ securitization as a financing solution.

The senior bonds A-1 and A-2 of CBSLT 2016-B are A2 and AA rated by Moody’s and DBRS, respectively (Exhibit 4). The credit support associated with both tranches is also relatively consistent with CBSLT 2016-A deal. The DBRS BBB-rated B tranche of this deal has 5.38% initial credit support, which is slightly lower than that of CBSLT 2016-A B. Moody’s did not rate the deal’s B tranche.

Exhibit 4 Summary of CBSLT Deals in 2016

We note that historically, CommonBond’s borrowers have never defaulted on their loans although 1.4% of loans in the pool are in deferment.

Further, as compared to traditional private student loans ABS, we see around 50 basis points of spread pick-up for CBSLT 2016-B. We expect that the relative value arbitrage between MPL and traditional student ABS papers will diminish over time as rating agencies grow more comfortable with the category and as investors reach for yield. 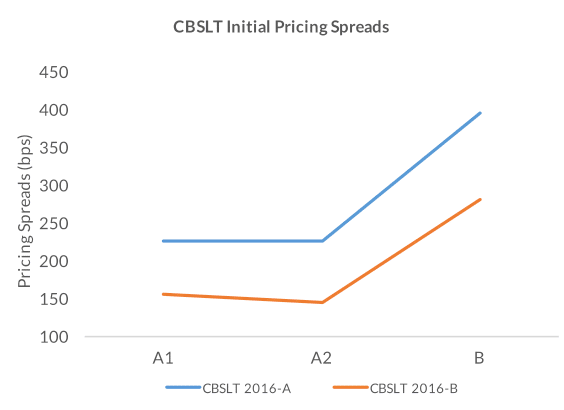