The NY Fed issued its Quarterly Report on Household Debt and Credit. Consumer lending growth has continued for three consecutive years after a period of deleveraging following the Great Recession. Total debt held by American households reached a record $12.73 Tn in Q1. Although debt levels exceed 2008 levels, the WSJ reports that as a proportion of GDP, total debt is 67% of nominal GDP as compared to ~85% in 3Q 2008.

On the securitization front, three transactions priced last week, totaling $1.23 Bn in primary issuance from a trio of issuers: SoFi (SoFi 2017-C), Earnest (EARN 2017-A), and Prosper (PMIT 2017-1). Last week represented a record of new issuance and continuation of ABS as a key funding pillar. We recommend a WSJ article titled Bond Buyers Forgive and Forget,  Flock Back to Online Lenders Debt. The article summarizes recent trends including increased issuance and investor demand for bonds backed by consumer loans.

This week, we focus on our discussion on Prosper Marketplace Issuance Trust (PMIT 2017-1).

Prosper priced its first unsecured consumer deal of 2017 on May 19th, representing the sixth deal consisting of Prosper collateral, and the first deal backed by Prosper’s consortium of institutional investors. The deal was structured by Credit Suisse and co-led by Jefferies.

The Consortium appears on track to deliver the $5 Bn loan purchasing commitment to Prosper as evidenced by i) size of the deal size ($470.8 Mn), ii) average age of the portfolio (two months), and speed to marketing the deal. The deal generates incremental revenue for Prosper which holds unrestricted cash and cash equivalents of $22.3 MM as of 12/31.

The closest comp for the deal is CHAI 2016-PM1. We compare key statistics here:

In recent quarters, Prosper has taken steps to improve underwriting. Contrary to conventional wisdom, reports on the commoditization of credit underwriting are greatly exaggerated. Significant variation in pricing, prepayments, and losses exist across originators operating in the same customer segment as evidenced by the PeerIQ Loan Monitor.

Prosper made a significant change in the in the credit underwriting by switching from Experian to TransUnion, the dominant credit bureau in the FinTech sector. The switch to TransUnion affords Prosper access to trended bureau data, more diverse credit attributes, and alternative data. Trended data provides lenders with a longitudinal view rather than merely a snapshot into a borrower’s credit behavior.

Prosper rolled out a new proprietary credit risk model PMI-7 on December 20th based on the TransUnion dataset. Although the trended bureau data is a significant long-term enhancement, it will take some time for Prosper to re-calibrate models based on new performance data. Investors and Prosper will be monitoring the vintage performance from PMI-7 closely to assess the smoothness of the transition.

Exhibit 1 shows receiver operating characteristic (ROC) curves, which illustrate the diagnostic ability of the Prosper risk models from an AltFi Conference in March. The ROC curves are created by plotting the true positive rate (TPR) against the false positive rate (FPR) at various threshold settings. In Exhibit 1, the 45-degree line represents a risk model that has model no predicative power.

Exhibit 2 summarizes important statistics of the transaction. PMIT 2017-1 was upsized from $450.5 Mn to $495.6 Mn due to favorable investor demand on pricing day. Prosper did not retain 5% notional of the deal; however, the risk retention requirement will be achieved by a member of the investor consortium.

Bond investors in the deal benefit from credit enhancement consisting of over-collateralization, subordination, reserve accounts, and excess spread. For PMIT 2017-1, the A, B, and C tranche has a total credit enhancement of 43.9%, 31.1%, and 10.4%.

The Prosper deal priced tighter than a recent LendingClub prime deal ARCT 2017-1, in part due to the much higher initial credit enhancement in PMIT as compared to other recent deals.

Walking down to lower junior tranches, PMIT 2017-1 C (B-rated) was priced about 40 basis points wider than ARCT 2017-1 B (BB- -rated). The steepening in the pricing curve again reflects demand for senior rather than equity-like risk profile (Exhibit 3). 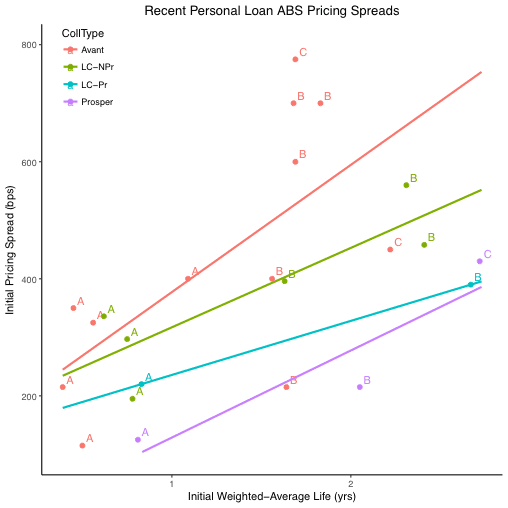 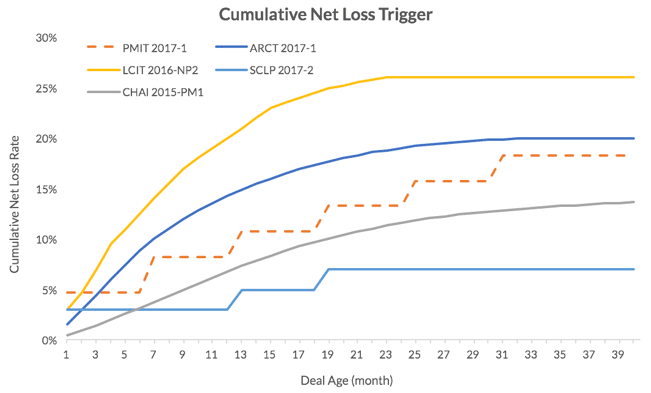 The exhibit conveys that trigger profiles can be very different even for similar collateral from the same shelf. PMIT 2017-1 shows a much higher starting CNL profile (MOB=1) than CHAI 2015-PM1, starting at 4.75% and peaking at 18.25%. The loss trigger profile has more losses early for PMIT 2017-1 as compared to older deals, such as CHAI 2015-PM1.The increased heterogeneity of deal terms and credit models underscores the need for 3rd party risk infrastructure to improve market standards and confidence.