This past week at the AltFi Global Summit in New York, marketplace lending leaders gathered to provide an update on the state of the industry and give their thoughts on the keys to future growth.

On August 31st, courts sided with the Consumer Financial Protection Bureau (CFPB) against CashCall, a payday lender started in the early 2000s, asserting that CashCall was the “True Lender” on loans that were originated through Western Sky Financial (WSF). CashCall partnered with the Cheyenne River Sioux Tribe to expand its lending footprint outside of California in 2009 in a relationship similar to the “rent-a-bank” strategy that several online lenders currently use.

The CFPB alleged that CashCall “engaged in unfair, deceptive, and abusive acts and practices” in servicing loans outside of its licensed state at usurious rates. According to the court decision (linked in the articles below):

The result of this case has similarities to the Madden v. Midland decision, which also asserted the precedence of state usury laws.

This decision increases regulatory uncertainty and consequently may motivate funding banks to align their economics with the loan performance.

SoFi is flexing its distribution capabilities by bringing a personal loan and mortgage deal to market in quick succession.

SoFi’s Professional Loan Program 2016-D (SPLP 2016-D) closed in August, shortly following the SPLP 2016-C deal in July. The capital structure of SPLP 2016-D is consistent with the last 2 deals, as expected of a repeat shelf like SoFi (Exhibit 1). The deal has four tranches with approximately $437 million of bonds, backed by $483 million of student loan collateral.

Correspondingly, and due to other factors including its expanding distribution capabilities, SoFi 2016-D priced tighter across the capital structure than SoFi 2016-B and SoFi 2016-C (Exhibit 3). 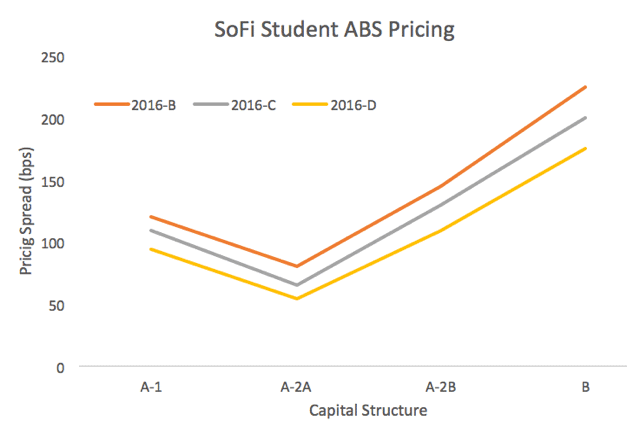 At current pace and growth volumes, we re-affirm our prediction that SoFi will be one of the US’s largest non-bank issuers globally, and that securitization will become an important financing solution for non-bank lenders more generally.

PeerIQ, and other ecosystem providers with a focus on improving transparency, standardization, comparability, and market integrity will be instrumental in allowing whole loan and ABS investors to participate with confidence.

Conferences PeerIQ will speak at: