Financings continue apace. Upstart announced a $32.5 Mn raise and sees an additional opportunity to help banks, credit unions, and retailers originate loans using their SAAS technology. This represents a continuation of the “capital light” theme (see Avant & Regions Bank, or OnDeck and JP Morgan for instance). In a much anticipated deal, Prosper announced a $5 Bn deal across a consortium of investors including affiliates of Third Point, Fortress unit New Residential Mortgage, and Soros Fund Management.

On the regulatory front, the US District Court of the Southern District of New York issued a decision in Madden v. Midland on remand. The court granted certiorari enabling a class action against Midland to proceed. In an unfortunate setback for lenders and investors, the court rejected the “choice of law” provision in relation to NY residents. The upshot is that the decision preserves the status quo of regulatory uncertainty, and increases the need for congressional action to overturn the Second Circuit’s Madden decision.

For those focused on deal-making at SFIG, we put together a summary of our impressions and takeaways based on dozens of conversations with industry leaders. 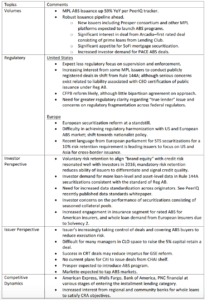 This week, several members of the PeerIQ leadership team will be attending LendIt where PeerIQ is nominated for the “Top Service Provider” Award. PeerIQ CEO, Ram Ahluwalia, will give a keynote address on Monday at 10:20AM on the role of securitization in marketplace lending.