In a widely expected move, the FOMC raised Fed Funds target rate 25 bps to a target range of 100 to 125 bps. The US Treasury released a report on banking and regulatory form, which if implemented, would lead to the revitalization of the private-label MBS market.

The past week was a seminal one for SoFi, Lending Club, and Upstart.

SoFi filed for an ILC bank charter in the state of Utah. The application indicates SoFi seeks to offer deposits and a credit card product. SoFi Bank, led by Arkadi Kuhlman, would be capitalized with $166 Mn in equity. Kuhlman was the Former CEO of ING Direct (and money transfer service Zenbanx). ING Direct pioneered online deposit-banking and may provide a glimpse into SoFi’s mobile banking aspirations. SoFi’s focus on community, a credit card offering, and a rewards program reminds us of another highly successful mass affluent brand–American Express.

This week, we focus on Lending Club and Upstart’s first sponsored ABS securitizations.

Below we show a comparison of recent deals from Upstart, Lending Club, Prosper, and One Main. 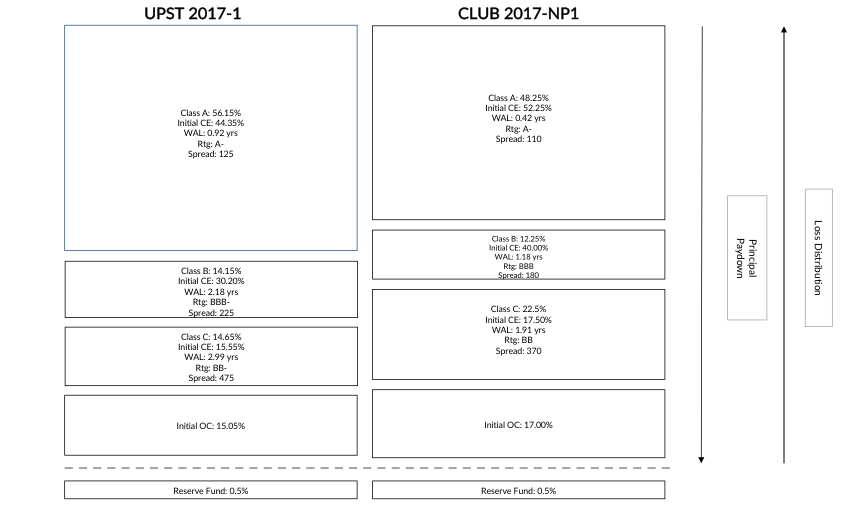 However, CLUB 2017-NP1 has one notch higher ratings on its Class B and Class C tranches, at BB and BBB respectively, despite a 7% higher loss estimate as compared to UPST 2017-1.

The higher rating is due to higher excess spread and structuring – the remaining classes have greater credit enhancement in the form of initial OC. Citi and JPM we co-structuring leads on the CLUB 2017-NP1.

In a notable milestone, the Class A tranche of CLUB 2017-NP1 priced at L+110 bps – the tightest pricing of any consumer loan securitization tracked by PeerIQ’s Securitization Tracker. From a funding cost perspective, the rate is competitive with term CD rates offered by GS Bank.

The tight execution is driven by a “risk-on” appetite, an alignment of interests among the sponsor and bond investors, higher levels of credit enhancement, and the short duration of the notes. Lending Club has also taken steps to structure around “true lender” risk by excluding borrowers from CO in the pool, and offering to purchase back loans that are challenged under state usury laws.

The steepening in the pricing curve again reflects demand for senior rather than equity-like risk (Exhibit 3). 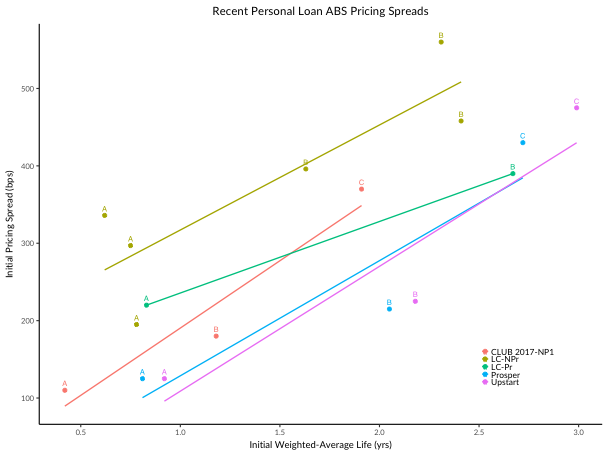 Source: PeerIQ
We observe a parallel shift in the credit curve. CLUB 2017-NP1 priced tighter than all other deals consisting of Lending Club Near-Prime collateral. The Upstart deal priced comparably to Prosper’s recent PMIT 2017-1 for Class A and B tranches. The Class C tranche priced 45 bps wider than PMIT 2017-1 in part due to the longer tranche duration (2.99 WAL vs. 2.72 WAL).

Besides credit support, senior tranche investors have additional structural protection in the form of a cumulative net loss rate trigger, which leads to accelerated repayment of principal in the event of worse-than expected collateral performance. (We illustrated the dynamics of trigger play in our earlier newsletter by applying simple hypothetical loss and prepayment assumptions.)

The CNL trigger is another mechanism to align the interests of bond investors and sponsors to the transaction. From the equity investor’s perspective, tighter triggers allow higher potential equity returns in the absence of any collateral losses. However, if losses exceed the available cushion before the triggers are breached, cashflows to the equity investors will be cut off faster and cause a reduction in the expected equity returns. Conversely, less restrictive triggers allow more cushion for losses before the coverage tests are breached. Additionally, senior notes would carry lower prepayment risk as the early amortization scenario is minimized. Further, less restrictive triggers require greater subordination levels and more capital.

We continue to observe a pattern of higher CNL triggers in recent deals, reflecting a conservative outlook from market participants. 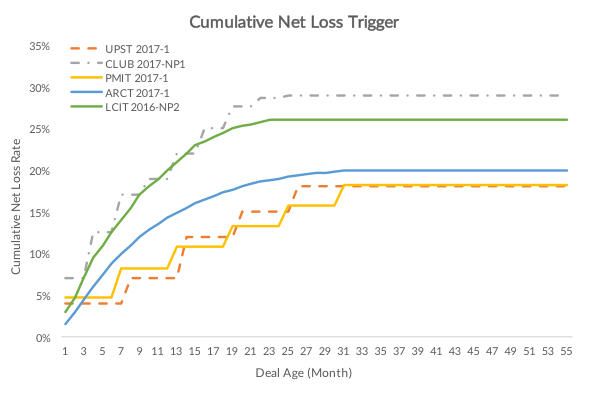 Although the equity tranche investors in CLUB 2017-NP1 are providing greater subordination to bond investors, they benefit from a less restrictive CNL trigger. CLUB 2017-NP1 has the highest starting CNL profile (MOB=1) vs. its peer group, starting at 7% and peaking at 29%.

By contrast, UPST 2017-1, structured and led by Goldman Sachs, has the lowest loss estimate amongst its peers, has a tighter initial trigger at 4% and peaks at 18% (a similar CNL profile to its closest comp PMIT 2017-1). UPST also benefits from somewhat higher structural leverage for equity tranche participants.