The economic picture and outlook for the US consumer continues to improve. US Q2 GDP was revised upward to an annualized growth rate of 3%—the fastest in two years. Hurricane Harvey may trim Q3 growth, reconstruction efforts are expected to drive expansion in the following periods. (Note: investors interested in using PeerIQ analytics to assess the impact of Harvey on their loan portfolio should reach out.)

On the regulatory front, US Rep. Maxine Waters, requested that the FDIC hold a public hearing on SoFi’s bank charter application to establish an Industrial Loan Company. We attach the letter from Rep. Waters to the Chair of the FDIC. Rep. Waters appears focused on i) discussion on updated and “outdated” regulatory framework, ii) consumer protection, and iii) financial inclusion.

In other news, Transunion released a study exploring millennial’s credit preferences. They discovered that this generation is using credit cards less and at the same time using personal loans more—due primarily to the growth in online lending. The biggest segment of online lending is still unsecured consumer loans. And with millennials now coming into their peak borrowing years this will provide a significant tailwind for the industry in the US.

We focus this weeks newsletter on the recent OneMain securitization and benchmark it to other near-prime consumer installment deals.

OneMain priced OMFIT 2017-1 earlier this week, making it the first deal on the OMFIT shelf in over a year, and OneMain’s second consumer lending deal of 2017. In our recent earnings overview, we highlighted OneMain Financial as the pack leader across non-bank lenders. And it shows – initially slated for $639 Mn, OneMain increased the deal size by almost 50% to $947 Mn due to strong investor demand. OneMain differentiates via their high touch approach, unique distribution channels, and strong servicing, and decades of historical underwriting data.

This is also the first OMFIT deal with a 30% secured collateral requirement and the first time either OneMain or Springleaf have issued a floater. Credit Suisse, Barclays, and Goldman Sachs co-lead the deal.

As seen in the KBRA Loss Range above, OneMain Financial continues to deliver some of the safest bonds in the consumer lending space. For instance, the KBRA net loss range is 115 bps better (6.85% to 8.85%)–a lower loss-rate than even the super-prime borrowers in SoFi’s SCLP 2017-4 (not shown). Overall, both of OneMain’s recent bonds had loss ranges expectations well below the rest of the cohort.

While many companies are moving towards low-touch digital servicing and marketplace lending, OneMain is leveraging its vast retail branch footprint to reach borrowers and communities. They are also  differentiating via verification of full income, employment, and collateral on all of their loans. Furthermore, their ability to service loans locally results in high-touch relationships with borrowers, which ultimately shows up in lower losses and higher recoveries. 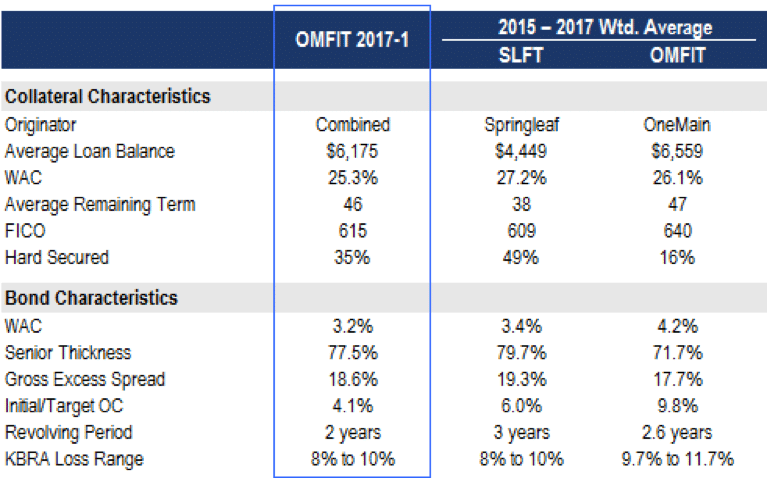 OneMain and Springleaf completed integration in Q1’17, 1.5 years after the Springleaf acquired OneMain from Citigroup in 2015. This is the first deal to include loans from both legacy firms. Although all branch offices were rebranded under ‘OneMain’, the combined firm has adopted Springleaf’s risk model and underwriting procedures. As you can see in the table above, OMFIT 2017-1 has characteristics of both SLFT and OMFIT shelves.

OMFIT 2017-1 is similar to OneMain’s legacy bonds with regards to loan balance and WAM, but shares more similarities to legacy Silverleaf on FICO scores, % secured, and target overcollateralization. We do not expect any more deals to use the SLFT shelf and all consumer finance deals to use OMFIT going forward. 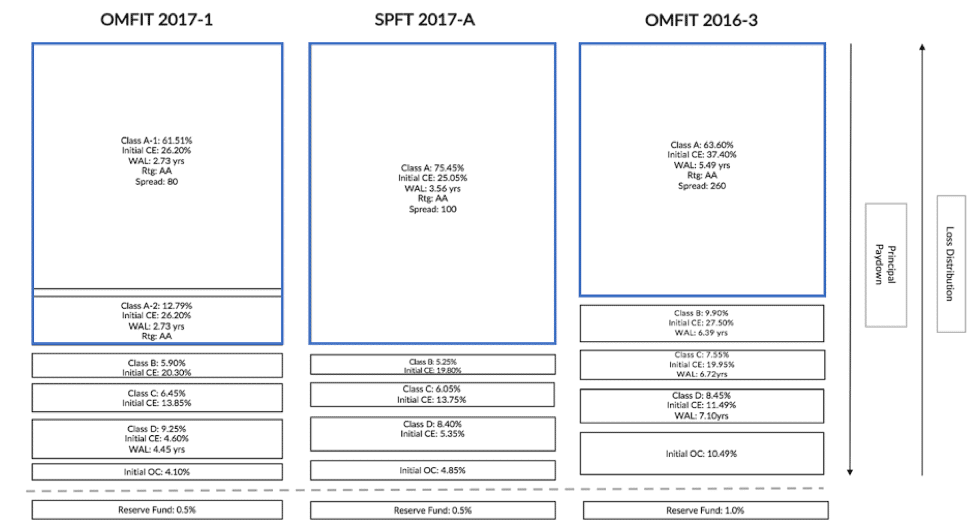 Although OMFIT 2017-1’s structure is much closer to SLFT 2017-A than OMFIT 2016-3, its senior tranche has a much shorter WAL than both. OMFIT 2017-1’s A-2 floater pays LIBOR + 80bps with no floor or cap. This introduces a layer of interest rate risk because the underlying loans are not variable rate. At the same time, the floater enables investors to guard against rising rates. ABS investors use the PeerIQ analytics platform to model the underlying collateral and assess the ability of the collateral to cover the A-2 coupon under various rising rates scenarios. 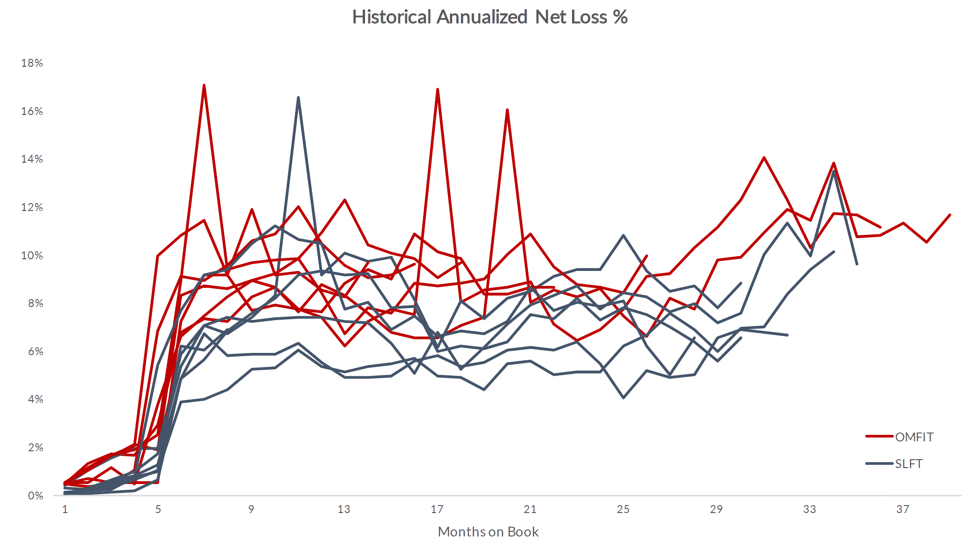 Note: The four peaks above 15% are a result of an accounting policy change

Unlike many of the other bonds we have looked at in previous blogs, OneMain uses an Annualized Net Loss trigger (“ANL”) rather than a Cumulative Net Loss trigger (“CNL”). An early amortization event will be triggered if OMFIT’s ANL is greater than 17% for any rolling 3-month period. As you can see in the chart below, OneMain typically has a generous cushion between its 1-month ANL and the 17% trigger. PeerIQ’s analytical tools offer both issuers and investors the ability to incorporate realistic loss and prepayment assumptions in their bond analysis.